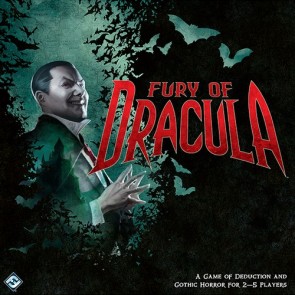 The original Fury of Dracula was a seminal game of my childhood. Whisked off the shelf as a curio on a trip to get some gaming miniatures, it quickly became a staple. Van Helsing and his pupils spent hours sweeping Europe, seeking for the Count. Instead, they often found feral wolves and savage gypsies as the vampire secretly spun his wicked web of intrigue across the continent.

That copy is tattered now, worn down by love. The chits are soft at the edges, the box battered and the figure of Dr Seward snapped off at the knees. He still struggled manfully after his quarry, those paired feet creeping into my adult years like the memory of childhood sins. Yet a little of the magic had gone. The game could be frustratingly random, and it needed an aggressive Dracula player to make it work.

A second edition fixed those problems at the cost of bloated rules and play time. It wasn't a worthy trade-off. Worse, the balance had shifted toward the hunters. Dracula was constrained by bizarre rules that made it hard for him to double back on himself, so the hunters had an easier time to box him in. He didn't seem much of a Prince of Darkness when he couldn't even cross his own trail to escape.

Here, now, is the third edition. The box cover might a laughable vampire Liberace but I had such hopes for the contents. Somewhere in the fog between those two flawed editions was an incredible game. A game that smoothly wove deduction and strategy with thrills and theme. I knew that game existed, but I wasn't sure there was a designer on the planet who could tease it out.

Inside the box, disappointment. There was still a location deck. There was still a six-card trail. Yet promise gleamed at the bottom of the card stack in the form of special power cards. There are several ways now for the Count to confuse his pursuers by moving twice or not moving at all. The best is Misdirect, a new card that not only lets Dracula double back but removes a link in the trail. Many unsuspecting hunters can stumble in the resulting hole in the chain of clues.

This is just the start. It seems that the developers thought the best way to get the best of both previous editions was to re-arm Dracula. Not with greater strength or fangs but with the powers of lies and obfuscation. At each place he visits, Dracula can place an encounter. Some of these are there to hurt the hunters but others exist to thwart or bamboozle them. They can lose turns, get moved away, prevented from searching the town for vampires. One, if allowed to "mature" by spending six turns on the board, even clears out half the card trail, leaving the hunters chasing after ghosts.

I would never have thought that adding misinformation was the way forward for this game. But it works. It works brilliantly. The hunters are grasping at endless tendrils of data with a variety of tools and cards to help them get more. Everything they need is there, but piecing it together demands method and skill. So much so that having one player run all four hunters can be too much to handle, remembering who found what, where. The Count meanwhile is doing everything in his diabolical power to muddy the waters.

Combat has had a major overhaul. Hunters now only fight vampires and Dracula himself. This allows the combat system to be boiled down to simple icon matching with a few special effects. It's crude but effective, allowing a balance of luck, bluff and skill without slowing down the game. Facing a vampire at night is a stream of hot terror, cards flashing past and damage accumulating at lightning speed.

Dracula felt too weak in the previous edition. Initially, it felt like he'd gone too far the other way in this one. With his newfound combat prowess and a slippery box of tricks, he ruled our first games like the dark prince he ought to be. It seemed unbalanced, frustrating for the hunters. But it's a testament to the skill of this design that we wanted to keep searching. Not just for Dracula, but for a way to beat him.

When we found some, it revealed yet more layers of excellence to the game. Dracula can coast against unskilled hunters. They, in turn, have the harder time of it, and never get an easy win. They have to learn to behave like pawns in a chess game. As a group, they can triumph, but only by making individual sacrifices when needed.

When they learn this, games become agonisingly tight. By the end, Dracula will have been lost and found repeatedly and Europe will be awash in the blood of hunters. Although the focus seems to have moved away from action to deduction, this edition might actually be the most brutal of the three.

The production evokes a fine sense of gothic grandeur. Yet the real period feel comes from the way that the mechanics evoke the characters of hunters and Dracula alike. The former are puritans, calculating efficiencies, working through probabilities, forming plans to ensnare their quarry. The latter is the very devil. A terrible, charismatic liar who must use all their powers of cunning, bluff and misdirection to put his pursuers off the scent.

May 02, 2019
Rating
5.0
Fury of Dracula 3rd Edition
Finally: a definitive version of this stone classic. Plays fast (2-3 hours) and is full of strategic deduction for the hunters and cunning bluff by Dracula. Atmospheric, exciting and brilliant.
MT
Matt Thrower #1 Reviewer 286 reviews

san il defanso replied the topic: #215114 16 Nov 2015 10:34
Fury of Dracula 2nd Edition was one of the games that made me an Ameritrasher. I love it unconditionally, but there were always issues I had to explain to people before playing. I think the biggest one was that it was very swingy. There were a lot of moments where it would look like one side could get away, but with cards like Newspaper Reports and Evasion, and then with Resolve powers, it always seemed like the game was finding a way to artificially balance itself. And I agree, Dracula was naturally pretty weak. It was still so much fun, but it was not perfect.

I just got my copy of 3rd edition, and I'm really optimistic about it. It looks like this game might have found it's perfect form.

ChristopherMD replied the topic: #215154 16 Nov 2015 15:14
With all this talk of rules being changed for the better here I decided to check on my least favorite rule from 2nd Edition. In 2nd Edition the Hunters may show each other their cards at any time. So when my group played this game each time a Hunter drew a card I had to wait for every hunter to quietly read it so they all knew what everyone else had in their hands. Was annoying and too hive-mind-y for my tastes, but its in the rules. 3rd Edition changed this rule so Hunters can still share cards at any time, but now they also have to show that card to Dracula as well. Unless they're doing a trade action. So at least that one rules tweak is definitely an improvement, imo.