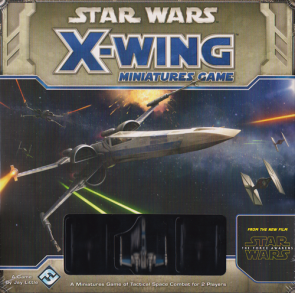 Everyone knew X-Wing was going to see some new expansions to TIE in (gettit?) with The Force Awakens. But I, for one, wasn't expecting to see it quite so soon, nor in the form of a new starter set. Releasing a new base box for all the new fans makes sense. The speed of the release less so.

So, what do you get for your money? Three new ships - different versions of the X-Wing and TIE fighters from the base set. Not just different paint schemes but ever-so slightly different models, too, and very fine looking they are. Their stats and dials have been slightly adjusted so that the new X-Wing is more maneuverable and the new TIE has a shield. Points costs have gone up accordingly.

This is all good stuff, if perhaps a little over the top in terms of variety. The surprise and, I feel, the missed opportunity, is in the pilot cards that come with them. Most of the elite pilots are not named. A consequence, no doubt, of the early release before some of the shrouds of mystery surround the film have been thrown off. Instead we get people like "Blue Ace" and "Epsilon Leader" who have perfectly useful pilot abilities but no character whatsoever.

The only named pilot in the box is Poe Dameron for the Rebels. He has the cool ability to adjust focus die results without spending his focus tokens, which can make for some awesome combinations. In one game, upgraded with the R5-P9 astromech that lets you spend focus tokens to regain shields, he turned out to be almost unkillable.

What's particularly interesting about both the ships and the pilots, however, is what it reveals about the directions FFG is trying to nudge the game. The new X-Wing has a boost icon among its action choices. Its maneuver dial has a new Tallon roll which allows you to make a hard turn while rotating the model ninety degrees. One of its new pilots gets an extra hard turn when they boost, and one of the new TIE pilots can barrel roll two distance.

The focus on maneuver couldn't be much more obvious unless it piloted a ship into your eye. And it's a good thing. When X-Wing first came out, it was a game about flying straight at the enemy and then turning round. It quickly evolved in to a game of list-building where you'd often win or lose before you even put a model on the table. No-one cared because those models looked so cool, but neither approach was sustainable in terms of game appeal. More in-game movement choices means more in-game tactics and that's just what X-Wing needs long term.

So I expect to see similar sorts of abilities on all the new named pilots FFG are going to try and flog us for these ships when the films come out and we want to fly them. That's good marketing, but it does make this box feel premature.

However, in spite of my reservations about the pilots, I'm going to suggest every X-Wing player who only has one copy of the base set should run out and get a copy of this. It's great value in terms of the figures you get. The extra range rulers and dice are really useful to have. More decisions during the game means there's more actual game.  And it's got a new damage deck which irons out much of the swinginess of the original one.

I don't think I've ever wholeheartedly recommended a release I have slight concerns over before. But there it is: it's a new dawn for Star Wars and for X-Wing and for me. And it's an extra on your Christmas list for you.

OldHippy replied the topic: #215752 23 Nov 2015 14:48
Sooo, I gave up on this game awhile ago. I still love it and play it, but I've bought no new ships since the release of the mouldy crow and don't plan to either. My battle foam is made for what I already have and I am not interested in ships from outside the OT.

As a result the X-Wings still fly great in my games and seem like a purchase still. With that in mind... does this box hold anything for me or will it just needlessly over power my X-Wings? I am planning on getting the A-Wing flying aces pack (I can still house a few of each of the OT ships so I could even fit this new starter in my battle foam) and picking up this wound't be a bad idea if it doesn't break the game as I play it.

Otherwise it's a pass if you're not interested in the new ships. It's nice to have additional asteroid sizes but not something you'll ultimately care a great deal about. It's main selling point is the new X-Wing and TIE.

So it may be a moot point anyway. If you've got any interest, though, it's such great value for money.

MattDP wrote: It's not just the damage deck - I find having more dice and range rulers to be pretty handy. Although it's expensive compared to a dice pack, I'll admit.

I have two original core sets so I have plenty of dice. I decided to skip the new core set, however it was very easy to upgrade my damage decks. FFG posted an article about them, and had all the images of the new cards, and what they replaced, so it was very simple to print out the new ones and slip them into the sleeve on top of the old card face. I think there were only seven new cards per deck.

JonJacob wrote: does this box hold anything for me or will it just needlessly over power my X-Wings?

MattDP wrote: you need to know that these are *not* original trilogy ships.

JJ, in case it wasn't clear, these are wholly different ship types taken from The Force Awakens. The TIE Fighter/FO (First Order) and the X-Wing T-70. The pilots are not interchangeable with the original X-Wings or TIE Fighters.