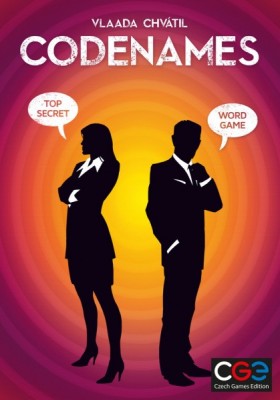 I love me some Vlaada Chvatil. I delight in his imagination and skill in welding together unlikely elements to create brilliant games. He likes pushing dexterity into unlikely place. Or adding depth of strategy to genres and mechanics that have not, traditionally, had much. So it came as something of a surprise to find that his latest game, Codenames, is a simple party game.

Except, of course, this is Vlaada Chvatil. And that means appearances can be deceptive.

The little box is full of double-sided cards printed with single words. Lay twenty five of them out in a five by five grid and divide the players into two teams, each one of which has a spymaster. He knows which eight of those cards will score his team points if they can find them, but he can't just say which they are. Instead he can only give a one word clue. One word to bring them all. One word to bind them. One word to hopefully indicate as many cards as he can in one go.

It's easiest to explain with an example. In one game, where I was the spymaster, among the cards my team had to guess were "vet", "teacher", "agent", "spy" and "fireman". So I said "jobs, five", with the number indicating how many cards my clue pertains to. Otherwise, had my spies gone over and started guessing the wrong names they'd be handing points to the other team. Or, worse, picking out the hidden assassin card for an instant loss.

One word, five cards. Easy, right? Well, you'd think so. But I've given you a poor example in the interests of quickly illustrating what the game is about. Because the reality is that the game is often fiendishly hard. Fiendishly, brow-sweatingly, terrifyingly hard. In my experience finding a single word to tie two cards together is a tough ask. Three is a minor miracle. That five was a one-off, and we won.

What makes it all the more difficult is that if your team picks a word belonging to the opposing crew, you're hit with a double whammy. Your turn ends and the opposition gets a bonus point. So you must never, ever give a clue that might indicate one of their cards or, worse, the assassin. Easy enough in theory. In practice this is almost impossible.

Say you've got "apple", "sink" and "cook" down. Great, that's three food-related cards in one go. But there's also "oil" down there, tagged as an enemy agent. How on earth can you come up with something to link there first three without also risking your team picking the latter too?

These conundrums drive the game. It doesn't help that your team will instantly turn into dunderheads when you're the spymaster. Suddenly unable to pick up on even the easiest of your subtle lexical allusions. It can also be slow to try and think of the best clues. There's an egg timer in the box for good reason.

It's rare that you can really learn something from a game, let alone one this simple. Yet Codenames illustrates with dreadful ease the vast chasms that exist between the words we speak to one another. The huge gulfs of misunderstanding and confusion into which we often stumble at great cost to our relationships and our jobs. Playing Codenames will make you a better, clearer communicator. That's a great reason to play it.

Another great reason is that it has vast appeal across groups of gamers and non-gamers alike. That's because it relies on concepts of language that everyone understands, yet is a real struggle to play well, . It doesn't even have to be played competitively. With less than four players there's a co-op variant where you play against the clock, but it upscales to more players perfectly well. You can take it anywhere, play it with anyone, which is a brilliant trait in a party game likely to be owned by gaming geeks.

The one problem that you might find with it goes back to my original example. Remember how I said the four was a one-off? I got that because I was lucky enough to have four cards with a very clear association between them. When I've managed to get threes, it's been the same: down as much to luck and skill. So the difficulty level in the game is very unpredictable. That in itself wouldn't be an issue except, depending on how the cards fall, it might be that one team has a much easier grid of clues than the other.

It happens more often than you'd want. But on the other hand games only last about fifteen  minutes so if you get a one-sided game you just flip the double-sided cards cards and try again. You'll want to, and so will all the other players too.

May 02, 2019
Rating
4.0
Codenames
A quick and cleverly designed word/party/family communication game, suitable for everyone. Surprisingly hard to do well, and really encourages lateral thinking. Some of the random setups are much easier than others, however, which can be frustrating.
MT
Matt Thrower #1 Reviewer 286 reviews

san il defanso replied the topic: #217248 14 Dec 2015 08:39
I really like Codenames. It reminds me of Dixit, in that it's a party game that's really accessible, but goes for something beyond just laughs. Not that there's anything wrong with a goofy game, but as you say it emphasizes communication, and that's really cool.

Jexik replied the topic: #217249 14 Dec 2015 08:53
I love Codenames. It's nearly as simple to teach as Cards Against Humanity or Apples to Apples, but more challenging and interesting... but also not trying to be funny. It works great as a game for 6-8, but I also really like it as a 2v2 game with two couples. It can be frustrating when your grid makes it hard to put two words together, but it's also quite gratifying when you get those threes.

One thing I've found is that colors seem to be an easy way out. One time I had ALPS and PASTE as my last two words. I said "stuck 2" thinking that people could get stuck in the mountains, and my team didn't get ALPS. After the game someone said, "you should have just said white!" The one time that I saw someone get a 5, it was with "Black 5." Words were things like Knight and Night- no racist overtones on any of it.

The only time that I've seen it flop was when we played it with my girlfriend's cousins and two foreign exchange students. The Pakistani kid and one of the cousins liked it, but the Chinese guy struggled a bit.

The first turn is also the hardest, so sometimes you're sitting there saying, "Hey this game is super fun and cool," and then you sit there really frustrated and thinking hard for a solid 2 or more minutes. Sometimes in that first game you've just go to throw out an easy 1 to get the game rolling.

Since names are valid clues, it's fun to use fictional characters. You can link Ring and Mount by saying "Frodo 2" for example. My girlfriend and I have been watching Breaking Bad, so we've used Walter and Jesse as clues. My friend and his wife once used "cat" to get the word "dragon" because I guess after seeing How to Train Your Dragon they both decided that Toothless acted like their cat.

san il defanso replied the topic: #217256 14 Dec 2015 10:11
Has anyone here tried playing with cards from Dixit or Mysterium? That sounds like it would be interesting with people I know really well. Probably not a convention experience or something like that, but I want to take a crack at it sometime.

Chapel wrote: I'm not sure how it has gone gangbusters that has become the must have of 2015.

Probably because it's a party game that combines the word association of Password with the bitter recriminations of Pictionary.

I like Codenames. It's a cute little filler. I'm not sure how it has gone gangbusters that has become the must have of 2015. It's cute, but game wise it's not very interesting or original.

It's not a must have in my book - it's just cheap, flexible and fun. It's the best party game of 2015 but that's not a category that sets a lot of gamers on fire. This is a game in that awkward niche that gamers of any stripe can enjoy.

It might not be original but it is smart design. It's got a lot of clever tweaks to keep it as smooth and as replayable as possible.

I'd hop on it sooner rather than later if you're interested. It will probably go out of stock in a wee bit.

objection, your honour. I think this is both hyperbole, and demonstrably false.
Citation?

My biggest issue is that it's too easy to win by simply not taking any risks. If your spymaster goes for easy clues that only reference one obvious word ... your team will probably win. In all five games, my team took risks, tried to make educated guesses, and pushed for connections between multiple words. The other team took the slow-and-steady route of one-word clues. They easily won all five games.

Now, maybe my team just sucks at this game (very possible). But I saw no indication that taking risks in this game is a viable strategy. Just go one word at a time making obvious clues that can't be misinterpreted ... and you'll win. And MAN, does that make for a boring experience. There's just no "game" here.