Gears of War in Retrospect 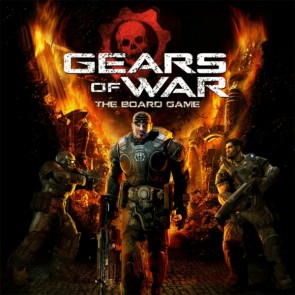 Gears of War has been seeing a bit of a renaissance in my house recently.  I looked back at my contributions to the site and realized I never wrote a review about it, only first impressions!  So here's my attempt to rectify that---caveat being that all my play of this game is solo, 2 characters, though I have played through every scenario except the Berserker in the base game and most scenarios several times.

Gears of War (GoW) is, to my mind, the best Dudes in a Corridor game I've played.  In general, the genre has never been my favorite. I like Warhammer Quest and Heroquest, it's cool, but I've never had a need to get it again since I had it in middle school. I am NOT a fan of Descent v1, and v2 isn't anything I enjoy particularly either. But GoW takes the template set by those games and turns it on its head, highlighting what I want from the genre and downplaying the elements I do not enjoy.

A game of Gears contains actual changes in tempo and high levels of threat. Unlike the other Dudes in a Corridor I've played, GoW's gameplay loop does not focus on marginal chipping away at HP or any sort of long-term grind through a dungeon.  I find the typical glacial JRPG tempo of most of these board games quite athematic and certainly unexciting. By contrast, Gears regenerates your health quickly but is not afraid to take it (all) away in any given encounter.  GoW centers its gameplay on lethal set piece battles between enemies who are close to your equal, and generates at least two to three in even the shortest scenarios. In fact, the powers you get from your orders are one of the only things that make your characters stronger than an everyday Drone enemy.  The design's focus on lethality percolates into everything else in the game, taking decision-making up a notch.

The tempo dovetails nicely with GoW's version of equipment. Instead of marginal improvements you might not notice, when you pick up something in the GoW dungeon, it fucking matters. The weapons are well designed and crucial. Getting additional grenades, a rocket launcher, the torque bow, even just some extra ammo are like a dying man getting a drink of water. No +1 sword that's a tiny bit better. There's no significant hoarding of items; there can't be because you are too busy trying to stay alive by fucking up aliens with everything you have.

On a mechanical level, all of this intensity pairs with mechanics that essentially do away with token bloat. Indeed, it is fairly surprising how low maintenance Gears is. Your action cards represent character health. Your enemies don't have traditional HP, but instead an ingenious two-stage system that represents almost everything about a full HP system without having to track it. There are no hexes, either. While this complicates LOS, making it slightly unintuitive, it succeeds in taking away another mechanical crutch used by dungeon crawls to again focus on counting and min-maxing rather than engaging the enemy.

With respect to negatives, the most prominent one is the occasionally creaky AI system. It needed another iteration/pass---which makes it especially disappointing that the system was never re-implemented.   It can be mildly advantageous to leave enemies around rather than kill at all times due to the way spawning and AI cards work. This is bullshit design. Nonetheless, if the system was iterated on I think this could be solved easily and, in practice, it's easy for players to simply ignore some of the incentives and shoot to kill. The game should be tuned with incentives to wipe every enemy on the board and constantly pile forward as fast as possible.

Similarly, the scenario selection could be better, especially given it is positioned in the Dudes in a Corridor genre. It has 6 scenarios that play out very differently every time, but there is no persistence. Criminally, it only has one short scenario and several quite long ones. Given that many encounters can balance on a knife-edge, it results in some long scenarios that end in your death only halfway through.

On the other hand, it may not be obvious on first glance, but the game is truly a huge toolbox. The base game represents great value in terms of content, and nothing feels left out for an expansion. Everything is designed modularly. While I'm not a creative scenario designer, I can easily change a scenario drastically by simply throwing in some other enemy into one of the enemy slots of that game and substituting their AI cards for what the scenario calls for. Nothing else needs to be changed! The toolbox aspect is especially true when you also consider the print on demand expansion, which with a small number of cards expands your scenario design options massively and includes almost every single enemy type from the entire videogame series---it feels very much like fan service, a last gasp by the design team at FFG to include all their ideas once they realized the game did not sell as they wanted and would not see a big box expansion.

That brings us to the real tragedy. What in my estimation is the greatest Dudes on a Corridor game is out of print, never to return, and its only expansion is massively appreciated on the secondary market relative to MSRP. But if your Dudes in a Corridor genre tastes are similar to mine, this is one of those games that I urge you to either bite the bullet on and buy or keep an eye out for on a dusty FLGS shelf. It is an absolute gem, best in class, and rises far above what you might expect from its unspectacular videogame setting. The system is begging to be reused, and I think it would have been an immensely better fit than Descent for Imperial Assault.

The soon to be released Fireteam Zero uses the action card/hand as health mechanic and has a vaguely similar theme (WWII though). I've played three games now and enjoy it, although it's not nearly as good as Gears. It's kind of like mixing GoW with Zombicide and a few new twists.

ludyee replied the topic: #219588 11 Jan 2016 11:01
I have had this and its PoD expansion since release. I late last year finally brought it out again and tried the first scenario with a friend. I had never managed to win the first scenario solo with two cogs and tried about a dozen times. We won together mainly due to a lucky timing of bad guy death and respawn in the final room during the middle of multiple attacks or some such (I don't remember exactly so don't shoot me if I just described something that can't happen).

I like the game fine but have found it extremely hard. I was reticent to even introduce it to others due to this, but eventually had to bring in a friend who I know is better at these kinds of things than I am. He didn't find it as much fun as I hoped though.

Back to solo only play for me, but I feel I can now move on to the second scenario.

waddball replied the topic: #219595 11 Jan 2016 11:26
I really hope this does get a retheme, as the mechanics seem sound, clean, and relatively original. I just have zero connection to Gears of War.

Gary Sax replied the topic: #219673 11 Jan 2016 16:14
Yeah, the base system skims out all the bullshit I hate about the genre---it deserves another shot. I cannot emphasize enough how important having meaningful upgrades is, something I would also want moved into a campaign version of the system.

You'd have to imagine that the shitty Gears license sunk this one. I can vividly remember seeing this on their "Upcoming Games" list for like 3 years. It was always listed as "in development". Most people were shocked the game actually ever came out.

I'd totally be on board with a 2.0 and a retheme to Warhammer 40k or something.

bigmop replied the topic: #219871 13 Jan 2016 14:37
I rarely login but I had to comment: GOW is not fun. It's very much like wrath of ashardolan but harder, lacks the variety, and is somewhat mechanically more finicky.

I do not recommend.

Ancient_of_MuMu replied the topic: #219879 13 Jan 2016 17:37
It was a great game and one of my favourites until I played it with more than 2. When played with 3-4 players, it bogs down, and once behind due to the nature of the AI system you never get a chance to catch your breath, and in the end need to game the AI rather than playing naturally. I had a really bad game with 4 that went for two hours and we were only 1/3 of the way through the mission. I traded it away soon after that, which was probably too soon in retrospect as I forgot how much fun it is solo playing 2 COGs. But then if I can really only play it solo, there are better options.
Read More...