Digging Up the Trash: Horus Heresy 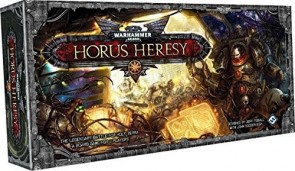 Horus Heresy was probably never worth £70 or whatever MSRP was where ever you are in the world, neither did it really justify a coffinbox, but I consider Horus Heresy to be one of FFGs best in house designs, and the second best game* set in the 40k universe.

The Warhammer 40,000 galactic epics live in the 5 minutes before midnight that saturated 80s cold war paranoia and the pop culture it spawned. Unfortunately Games Workshops games never really lived up to their own preamble. Two forces of 50 models might adequately represent a clash of football hooligans but it doesn’t really do justice to the battle for the fate of the universe. In Horus Heresy FFG’s designers have managed to capture all of the promise of the 40k’s tongue in cheek space gothic into a three hour war game. Earth’s defenses are raised, invading drop pods rain down, then armies of titans, legions of fanatics, and a collection of heros smash it out in assaults on the imperial palace or a series of spaceports.

I love this game, it feels a lot like War of the Ring to me, in that it's a similar weight (both physically and in terms of boardgamer jargon) and has a similar narrative goal. I like the plot of beats of invading, or deciding where to make the last stand, I love the orders system and how it forces you to gamble on your expectation of the board state in two or three turns time. Multiple paths to victory, hidden information and a delay between you planning an action and getting to see the result are all solid ways to add strategic depth to a war game, and they all work to varying degrees here.

Whilst I love this game, I don’t think it’s as good as War of the Ring, and I would only recommend seeking out a reasonably priced copy. It has a few flaws. It takes about 3 - 5 games to really grok the games systems. Moving units around the board is hard until you know the action card deck well enough to really manipulate it. I have played perhaps 12 games, I think the Emperor has won less than 30% and all by killing Horus. Conversely all but one Horus win have come from controlling the spaceports. The game allows for free set up. If the defending emperor makes a bad call on how he or she distributes their initial forces they can easily be done, either stretched too thin, or not covering enough bases. Finally the Hero’s very rarely die. They have 12 hit points from memory, perhaps if they had 10 or 8 targeting them with attacks might be more worthwhile. It still works as a war game but it’s demands repeat plays and an acceptance of some false decisions.

In sum I can see why this got shredded when it released, but there is a classic in here for fans of sci fi wargames, or the 40k they never quite found as a kid.

*number 1 is Spacehulk, I do include all the minis games in this ranking.

Being a bit bored on Boxing day, I had an idea. Most of us are too lazy to write semi regular columns, but we could have a pass around column. As often as we can be bothered someone digs up an AT game they feel needs a little love, gives ~500 words on it, then nominates someone to do the next one. It doesn’t have to be fancy, or that well written, just something for us to discuss and tick an article over. If the nominee doesn’t bite someone else can volunteer to take it for them.

OldHippy replied the topic: #221972 08 Feb 2016 12:27
Nice job dude. I like reading about older games, especially to get an alternate viewpoint on something that most people didn't like... Doc Mabuse is the only other person I know of who said something positive about this game.

Gary Sax replied the topic: #221997 08 Feb 2016 14:16
It's super interesting how games get rehabilitated in hindsight but then some depreciate. It comes to mind because everyone was selling off their Pathfinder copies, a game which I think has depreciated quite a bit since its release which was very warm here (and not just Barnes, all over our forums).

JonJacob wrote: Nice job dude. I like reading about older games, especially to get an alternate viewpoint on something that most people didn't like... Doc Mabuse is the only other person I know of who said something positive about this game.

I like it. I've always liked it. My only beef is that it's way too long for what it is, and it's ultra-swingy because of several reasons, not the least of which was the free-wheeling initial setup and the movement mechanic which is kind of opaque.

southernman replied the topic: #222029 08 Feb 2016 17:58
I've played a few games recently, having picked it up last year, and I think it is a very clever game but I think they did not quite get the mechanics and rule mix right.
The Initiative track as a timer (a-la Middle Earth Quest) is fine but then restricting units to either move or attack before they become activated and then having to wait to be refreshed (as opposed to move and attack a-la Runewars or TI3, or even Tide of Iron) makes a very difficult and/or frustrating game (considering the Refresh phases means there are only 6 turns) for all but experienced/hardened war or minis gamers. The card combat is very good (not as good as to what it has evolved to in Forbidden Stars), but then the restricted Orders (randomly found in the deck, as opposed to say the order system in Runewars and Forbidden Stars) brings too much luck into a game of 6 turns max plus it doesn't quite gel with the interesting Strategy board mechanic (the Imperial player burying orders to use up time and maybe removing a good order that you finally drew seems to be a negative to this mechanic).

But hey ho, it's a board game and they will always be liked by some and not by others - I'm still on the fence with it at the moment (I do like the look of it when in play) but it may hit the trade/sell pile when Star Wars: Rebellion comes out as I don't have enough time or opponents to have too many long 2-player games (War of the Ring and Tide of Iron already get very little table time).

Horus Heresy was probably never worth £70 or whatever MSRP was where ever you are in the world, neither did it really justify a coffinbox, but I consider Horus Heresy to be one of FFGs best in house designs, and the second best game* set in the 40k universe.

I was a fan of the original Battle for Armageddon boardgame back in the 90s. That and its sequel Horus Heresy were neat light board wargames, just the right weight. FFG's Horus Heresy is a bloated mess by comparison I'm afraid. It became a shelf toad after a half-game at my table, a real disappointment.

A good review though. You're right about Space Hulk being the original lightning in the bottle of GW's 40K boardgames, a true masterpiece demonstrating all that was best about GW's late 80s halcyon days.

Cranberries replied the topic: #222347 12 Feb 2016 21:40
I always hope that some game savant will take a good looking game like this and revise the rules to the point where it becomes a masterpiece. Sadly, I am not that person.

craniac wrote: I always hope that some game savant will take a good looking game like this and revise the rules to the point where it becomes a masterpiece. Sadly, I am not that person.

For the activation issue I didn't like (units couldn't attack, in most cases, after they moved until the refresh phase) we have trialled that when using a Move order you can spend 1 extra initiative to have a 4 round Attack, too few games to say if it makes us feel any happier.
We also tried changing the Routed rules from when units retreat they become routed in the area they retreat to as well as routing all other units there to only the units moved are routed (a-la Runewars), plus routed units refresh with all other units rather than taking two refresh phases.
Read More...