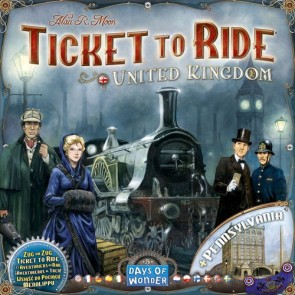 I've nurtured a long, slow hatred of American cultural imperialism. As a developer, having to spend every working day spelling "colour" wrongly in your code will do that to a man. So, petty as it is, wherever possible, I'll pick a British version of a thing over an American one. And if a British one doesn't exist, I'll seethe quietly while I wait for one.

So it feels like about time that there's a local version of Ticket to Ride for me. With it being such a great family game, my kids know the routes between Seattle to Atlanta and Essen to Sevastopol better then their own home town. Now they can learn the way around their own country too, with the help of some little plastic trains from either original set.

Or perhaps they can't. It turns out that this is one of the least family-friendly iterations of the game yet released. Its gimmick is the addition of technology cards, which you buy using locomotive cards as currency. To support this the box has a whole new card deck with extra locos. Plus a new rule that allows you to cash in any four ordinary cards instead of a locomotive. So that's more rules and a whole slew of new technologies to memorise. No hurdle for hobbyists, but it's a steep slope for regular family folk.

At the start of the game you can only build poxy 2-space routes in England. If you want to build longer routes, build ferries, build in Ireland, Scotland or Wales you'll need the appropriate technology to do so. Plus there are more esoteric options, like tech that gives you extra points or lets you cash in less cards for a route.

With all these new options on the table, it looks like a recipe for some new strategies. In reality, however, they function more as limiters. Everyone needs to be able to build longer routes to succeed. It's hard to imagine doing well without building ferries or outside of England, too. So buying these is a given. As for the other stuff, well, let's just say I've never seen a technology heavy strategy win.

Conversely, there's a massive ten-space, 40 point route on the board and I've never seen anyone claim that and lose. It looks like a bit of a game breaker, although people who've grabbed it do tend to fail a few tickets.

In summary, it seems to add extra rules and extra luck of the draw for no particular extra gain. I've no problem with the latter, as Ticket to Ride is inherently a luck-heavy game. The former is less forgivable, though. So unless you have a particular geographical bee in your bonnet like me, there's no real reason to favour the UK map over the vanilla one.

But wait. What's this? Tucked away on the corner of the cover like an embarrassing elderly relative, there's a little logo that says "Pennsylvania". If you rummage in the box there's a few more cards with funny pictures on. If you flip the board over, there's another map, another bit of god-damn America.

The new mechanics for this map are a lot more easily digestible. Each time you claim a route, you can grab a stock certificate from one of several rail companies associated with it. At the end of the game, players total up their stocks in each company and get bonus points depending on how many they got. Simple.

Yet what looks like an afterthought turns out to be the better of the two maps. Those stock certificates are mean. They're kept face down which means you have to try and keep a running tally of what other people are collecting. Unless you're a human calculator that rapidly becomes impossible. So every selection becomes a cauldron of paranoia, as you wonder whether the card you're picking is worthless, or a game winner.

Plus, each company operates on a small sub-area of the map. To maximise your points you want to spread widely. So that's another thing to plan alongside making your tickets and gunning for the longest route. With plenty of blocking opportunities too, the game becomes gloriously brutal. And with both tickets and stock points waiting until the game end, there's uncertainty right up until the last minute.

So the UK map is only for real Ticket to Ride enthusiasts. But Pennsylvania may be the best variant of the original game I've played. It's almost a shame they made you pay for them both in the same box. Much as I hate to admit it, America wins again.

May 02, 2019
Rating
2.0
Ticket to Ride: United Kingdom & Pennsylvania
UK map is a disappointment. The new technology mechanic feels like a crapshoot and actually seems to narrow the strategies available rather than increase them. Pennsylvania map is much better, and the added points from company investment is interesting, but not good enough to make the whole worthwhile.
MT
Matt Thrower #1 Reviewer 286 reviews

OldHippy replied the topic: #219594 11 Jan 2016 11:24
I'm still waiting for a Canadian edition. But most of the world doesn't know we exist and when they do meet us immediately ask if we're American.

There's a newspaper article from S Korea (around 1997) and on the cover was a photo of a collection of world leaders. The American, English, Korean and Canadian leaders and underneath was the caption letting you know who was who, this is what it said... "From left to right is, Bill Clinton, Tony Blair, Kim Young-sam, and an unidentified man" - HEY - that 'unidentified man' was Jean Chretien, our Prime Minister. My Dad cut it out and it's up on his wall. Great shot that does as much to define Canada as hockey or SCTV.

I heard this Marine did a lot of push ups after the game.

Bold, and possibly best opening sentence to a board game review that I've seen in quite awhile.
Read More...