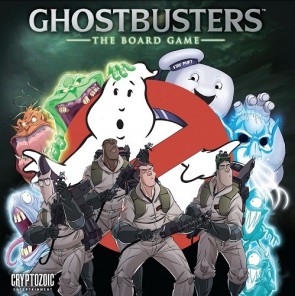 Game Name
Ghost Busters: The Board Game
Publisher
Cryptozoic
Designer
Mataio Wilson
There Will Be Games

Ghostbusters: The Board Game

I’ve long maintained if there’s one movie you can be pretty sure that most of the people you meet will love (or, at the very least, like) it’s Ivan Reitman’s classic Ghostbusters.  As kids, my brother and I loved it; similarly eating up the cartoon, toys, sequel, lunchbox, pyjamas…And now, it’s back, as a fully co-op board game.  If, like me, you’re the sort of gamer who craves genre emulation, then you’re onto a real winner here.  The game plays exactly the way you want a Ghostbusters board game to play.

The game is an episodic adventure game for one to four players, who are charged with busting ghosts and sealing gates to the Spirit World. Players choose one of the four Ghostbusters — Peter Venkman, Egon Spengler, Winston Zeddemore and Ray Stantz — then select one of the game's pre-written scenarios, beginning a game session that lasts from 30 minutes to two hours, depending on the chosen scenario(s) and exactly how much of a challenge they fancy.

Each of the Ghostbusters has unique traits and talents that can assist the entire team, with highly co-operative gameplay. As players gain experience from banishing spirits, the Ghostbusters level up, gaining new abilities that help them take on greater challenges.

The game does also contain some great moments of fan-service, from the appearance of the Stay Puft Marshmallow Man and Slimer, to the base – but legitimate – thrill of driving the Ecto-1 around the map.  The ghosts and their busters are represented by small plastic miniatures that capture the feel of – if not the movies – then certainly the cartoon and the comics.  A real nice touch is that when a Ghostbuster manages to hook a ghost with his proton stream, you actually get to hang a little ring-donut-shaped cardboard marker onto the miniature of the ghost, so it looks like you’re capturing them.  It’s silly, I know, but it just looks so satisfying on the table.

An average game consists of the four ghostbusters playing four different “maps” or “levels” of a campaign, each of which get successively harder.  The AI behind the ghosts is rather simplistic, but it does make for some rather chaotic events during a game, which adds to the replayability.

On the down side, the card components could possibly have been a little thicker, and harder wearing, but this is a minor quibble.  The game itself may even be a little too simple for those who prefer their games on the heavier side – this is hardly Arkham Horror, but neither is it trying to be.  It’s a fun, light adventure/skirmish game for Ghostbusters fans.

For those who have been waiting for a decent Ghostbusters game since the demise of West End Games’ Ghostbusters RPG…WE GOT ONE!

Brad Harmer-Barnes is a contributor to Miniature Wargames magazine, as well the editor of Suppressing Fire.  He can be followed on Instagram and Twitter at @realbradhb

Gary Sax replied the topic: #221536 03 Feb 2016 09:43
Only person I've heard say much about this around here was Spaceghost... how would you compare it to other dudes in corridor or dungeoncrawl type stuff? Beyond the theme (a definite draw), what's the mechanical twist/draw of this?

charlest replied the topic: #221539 03 Feb 2016 09:53
It's very mediocre in my opinion. It's very mundane and there's not much there mechanically to grab on to. Extremely simple and repetitive.

The ghosts don't even move and attack you unless you attack them and miss. Almost every scenario is run around the map and just close the gates by shooting them.

BradHB replied the topic: #221543 03 Feb 2016 10:18
Gary
It's the theme above all. If you ever played the Ghostbusters video-game "Sanctum of Slime", it's kinda like that. Just throw in with your friends and chuck proton streams at things while quoting the movie. It's not earth-shattering, but it is fun.

Charlest
Personally I like the simplicity of it. I think a lot of people were expecting this to be something akin to "Arkham Horror", and I don't think that's ever what the designers or publishers were going for.

BradHB wrote: Gary
It's the theme above all. If you ever played the Ghostbusters video-game "Sanctum of Slime", it's kinda like that. Just throw in with your friends and chuck proton streams at things while quoting the movie. It's not earth-shattering, but it is fun.

man what I don't need are more "quote a movie" games

VonTush replied the topic: #221563 03 Feb 2016 12:05
In my limited plays so far the game seems fair. Not great. Not bad. It feels like one of those games you and your friends designed in a basement on sleepovers. And I don't say that as a negative, I firmly believe that there needs to be games of all levels and complexity.

It's fatal flaw is It feels like a mass market game packaged to look like a hobby game. It is too light for hobbyists and too expensive for mass market. It should have been edited to fit in a $30 or $35 box and peddled at Target or Walmart.

Sagrilarus wrote: What does "Trash, Culture & Violence" mean in the article title?

I was assuming it was just a tagline for all of his reviews/musings.
Read More...