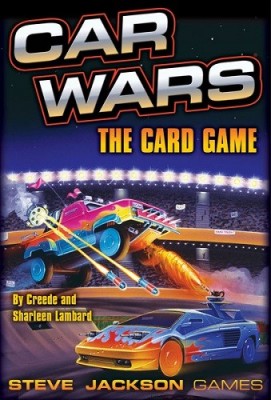 Brad Harmer-Barnes explains why stripping the crap away from a Steve Jackson game makes it work better.

The old hands and experienced gamers reading this will need no introduction to Steve Jackson’s Car Wars universe.  For the rest of you: in the near future, combat between armed and armoured cars has become an arena sport. “Autoduellists” shoot at the other cars, trying to destroy their tires and armour. The last player with an operating car is the winner.  If you play the full game, you can tinker with cars, motorbikes, hovercraft, helicopters, tanks, eighteen-wheelers….pretty much any vehicle.  If you’re after a quick blast ‘em up without the mathematics induced headache the full game can engender, then Car Wars: The Card Game has you covered.

Car Wars: The Card Game is nicely packaged, and the new box art brings to mind the 90s video game crash-heavy carnage of titles such as Destruction Derby, Wipeout and Twisted Metal.  The cards inside are similarly vibrant.  You know straight away that you’re looking at game that’s going to be loud and over the top, with the physics eschewing Isaac Newton in favour of Wile E. Coyote.

Car Wars: The Card Game is – at its diesel guzzling core – a “take that” cardgame.  In each battle, the players play cards to damage other players cars. When one side of a player's car is breached (the armor on that side destroyed), the car's driver may be attacked. If a car's driver is disabled and unable to operate his car, the player who disabled him scores a kill.  When only one car is left (or when time runs out), the duel is over.

The gameplay is fast and furious, with players desperately trying to blast each other with increasingly powerful weapons, and increasingly devious tactics and countermeasures.  The games themselves are relatively short, and this is certainly a good thing.  They can be luck heavy, and sometimes you’ll feel like you’ve been pounded into submission without so much as firing your engine up.  Car Wars: The Card Game is great for bringing out at the start of the gaming night, or if you’re waiting for the last couple of players to arrive before you can play something more substantial.  It’s a fun filler, but it’s not going to be a title you play regularly, as if you make it the feature game of the evening, the cracks will start to show.

Brad Harmer-Barnes is a contributor to Miniature Wargames magazine, as well the editor of Suppressing Fire.  He can be followed on Instagram and Twitter at @realbradhb

Shellhead replied the topic: #222854 19 Feb 2016 13:15
For nearly a decade, my gaming group played a lot of Car Wars. The game eventually collapsed under the weight of its own success, with too many ill-considered additions to the game. I still remember getting eliminated on the second round of multi-player duel, because somebody used a flame-cloud ejector on my car with a gas engine, causing my car to catch fire and explode. And yet that was otherwise a great session. It was a "steal the bacon" scenario using a relatively small map consisting of concentric rings of octagons with occasional gaps in the walls. One guy nearly escaped for the win, but an opponent got him with a flash grenade, forcing the target player to turn out the following turn and call out his moves without being able to look at the map. He misjudged his blind turn towards an exit and hit the wall hard.

Vehicle design was time-consuming, and I bet there were undetected mistakes and even cheating at times. We often had arguments about proper use of the turn key, or how the vehicles would move upon collision. And yet, I would much rather play some classic Car Wars then a take-that card game with the same setting. Take-that card games tend to fall prey to the usual multi-player game problems: attack the leader, kingmaking, unfair advantage to extroverts, etc. Classic Car Wars could have these issues at well, but a good map tended to make them less of an issue, by restricting player options to targets within ramming range or weapon fire arcs. And even the cumbersome movement phase system was made tolerable because it helped the game really match the concept, making the duels look like real action played out in slow motion. Maybe this particular take-that card game is better than usual, but it still probably has more in common with Munchkin than Car Wars.

evilgit replied the topic: #222898 20 Feb 2016 15:36
If this is the original Car Wars The Card Game, yeah it's a completely basic Take That game. I know there were remaking it but once they said they weren't changing any mechanics, it dropped off my radar. It dishonors the memory of real Car Wars for me.
We played the hell out of the first three plastic boxes back in the 80s whenI was around 13. We'd put on ZZ Top and play for 12 hours at a stretch. Great memories and I'd love to see someone capture that feel in a modern board game design. But I can't take a game seriously today if it breaks down turns into tenths of a second.

Just as I can't take a game seriously today like The Card Game. Zero strategy other than table politics of whom to attack. You play your best attack card and hope you draw a defense card. Every turn. Until it's over.
Read More...