Digging up the trash: Judge Dredd 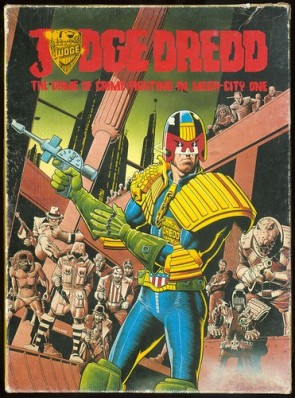 Published by Games Workshop in 1982, Judge Dredd was the first in a series of cross-media adaptions of 2000AD comic strips into tabletop games- boardgames and an rpg, projects that were to have significant impacts on the aesthetics of their two main miniatures brands, but most iconically WH40K.

But that is to get ahead of ourselves because 40K was still 5 years away when, in 1982 GW launched their first in-house boardgame design with Ian Livingstone's unassuming little bookcase of a boardgame. This game hit our gaming group- already committed Cosmic players, like an earthquake.

The game's simple enough. There's a map with areas representing Mega City 1 locations. Cards generate classic Dredd perps performing random crimes across the city. The players' Judges move across the city, using action cards to help themselves capture the perps in VP race. On the face of it the game is one of fighting crime on the streets of the Mega City. But that's not taking account of the Grand Hall of Justice, and finkery, damned finkery- at least half of the cards can do bad stuff to your opponents as well as doing good stuff for you. The game becomes one of dirty politics in the corridors of the Grand Hall as players strive to enjoy the Hall's full 6-card redraw in search of that dirty little hand that'll nab you a prize perp.

On face value there's not a lot to Judge Dredd. It's the meta opened by the inevitable and incessant finkery that elevates this otherwise unassuming little production to an unsung proto-AT classic. In my group this game spawned the '25-year revenge' so bitter were the thrashings that were handed out out of sheer spite, all done in the best possible taste. I'm sure that set wasn't the only one to see so much action back in those days. The game is playable in 90 minutes allowing for repeated plays over long days intense with backstabs, grudge bearing and trash talking.

If the game was brutal behind its deceptively simple appearance, the production was evocative if a bit cheap. The board was outstanding- a thick jig-map featuring all-new artwork by Dredd artist Ian Gibson. The cheap was the crime cards- which had to be half size to fit on the map, these were unlaminated perforated sheet cards instead of card deck style cards like the full size action cards. The cards all had original artwork reproduced from the comics. This created a good in-game narrative out of the combos of perps and crimes from the monstrous- Judge Death doing a murder to the ludicrous- Gestapo Bob littering; and the action cards felt like combat kit to tool up with as well as finks to husband.

BGG lists Judge Dredd's categories as Comic Book/Strip, Fighting, Science Fiction. That's pretty apt. The game's crimefighting theme is only lightly brushed and pasted on, but it's there. Played knives out, the fighting is real. As a design, Judge Dredd is perfect. The mechanics are simple and are clearly explained in the short rulebook. A new edition would only need a slight production upgrade- the crime cards most importantly. GW and/or Ian Livingstone licensing the rights for a reprint? Well, you can dream, can't you?

evilgit replied the topic: #222957 21 Feb 2016 22:38
Yep, this one got a lot of play in our group in the mid to late 80s. The Judge Dredd universe had so much going on that was rarely captured outside the comics. Not sure why but the Robodogs card was always a favorite.

Mr. White replied the topic: #222981 22 Feb 2016 13:21
This game is awesome. Still the best superhero game ever designed. In fact, I think superhero games are still following pretty much the same formula...a crime is going on in a location, move your hero(es) there to bust the perp. This one has the bonus of having a fantastic setting, amazing art, and ease of play. Marvel Heroes, also a great game, is like a much more complicated version of this.

I've had two copies. One back in the day that I sold off during my GW purge in the mid 00's. Then a copy a few years ago that I made some alternate heroes for. I realized my old group that would play this, now having kids and such, don't meet as often to play these sorts of games. When we can get together it's for some minis game as that is our first priority. Plus, the characters are to foreign for my kids at this point...besides we have Heroscape and Dungeon! that they already love (and now Pokemon Master Trainer). Moved that copy on to Wade here at the Fort.

Great game though and when I pulled it out at the last convention I went to a lot of folks stopped by asking if it was a new title (condition was fantastic). C'mon...it's Dredd!

Anyway, here's a photo from my last copy (snipped from BGG) with heroclix minis used as player pawns. You can see I added some Dark Judges as well.

Also one of those variant heroes I made:

What was the name of that cereal you play on an opponent's judge? I loved that card...

wadenels replied the topic: #223019 22 Feb 2016 20:29
Still playing the copy I got from Jeff, and having a blast every time we play it. I'm leery of the idea of a new edition because there's really nothing that should be added or taken away from this game mechanics-wise, and I just can't see a company doing a straight reprint with all the original artwork. It's a great solid core that doesn't need to be modified, and the artwork seals the deal.

A good number of games that have come out since, some of which get a lot of praise, are really just Judge Dredd with a twist. None of them are as good as Judge Dredd, even all these years later.

JD is perfect as it is. Not sure why I made all those variant characters on one use cards. Maybe just for kicks? Maybe I was bit by the variable player power bug? I think I even had minis for all those other characters as well. I don't remember.

As it was we just used those 2000ad minis instead of the pawns. That was usually the extent of pimping and tweaking we actually played.

JMcL63 replied the topic: #223021 22 Feb 2016 21:37
I guess I should've said new printing instead of new "edition" just to be quite clear that I too think that this perfect little game doesn't need a design makeover. A production upgrade would be nice though. Either way, it would just be great to see this game on sale again.

or have I lost my mind?

metalface13 wrote: Somebody has a new avatar

Looks good too, thanks!

I'm a little leery of playing Orcs at both tourneys, but I'm really into this team at the moment.

Oh, I'll be doing my Bret Humans at ROT Cup in April. I'll need your services...

or have I lost my mind?

It's plasti-flakes with synthi-lix causing chronic indigestion. I had 2 personal favourite finks: the Edwin Parsey card, with it's inevitable refrain of "Oh no judge, it was me"; and the trick of using a judge card to stop someone Barneying themselves to a choice location- often the Grand Hall of Justice, but also sometimes just to stop someone making a quick getaway when they find themselves completely outgunned by a perp.

I finally picked up my own copy off of eBay a few years ago. It's seen 8 plays in that time- ie. once in a blue moon, but my current gaming group seem to find it just a bit too cut-throat for their liking (I can still remember the shocked look on one guy's face the first time he experienced the full onslaught of the game's finkery). Judge Dredd remains one of my keepers all the same. I'll get it to the table again sometime.

Sounds delicious. Chemical composition of margarine is something like one molecule away from plastic, so maybe this is similar.
Read More...