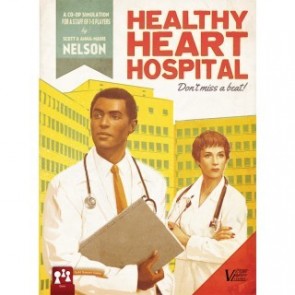 Victory Point Games’ recent Healthy Heart Hospital is one of only a handful of games that have explored the healthcare setting. It’s strange that a subject that touches just about everyone’s lives is so rarely addressed in games, but I guess more remote topics such as fantasy variations of sports and dungeon-crawling are what sells papers these days, so to speak. But VPG has the flexibility and freedom to do pretty much whatever they want without worrying about moving units through distribution, so it’s little surprise that this sly little Eurogame is coming from the same company that brought us Wings for the Baron (about the aviation industry in WWI Germany), Circus Train (about managing a circus troupe) and games about mountain climbing, boxing and numerous obscure conflicts.

Scott and Anna-Marie Nelson’s 1-5 player co-op design puts you in charge of managing a down-at-heel hospital trying to increase its reputation- and, since this is an American hospital, its profits. There’s just a hint of satire that runs throughout the game, nowhere more evident in how integrity and reputation and are often at odds with for-profit healthcare. Healthy Heart Hospital pays the settlements, but they also hide the bodies- they may just be cubes, but the lives of these patients are often bound up in the consequences of player decision. But the agenda is clear in the rules- “the real patient is Healthy Heart Hospital”.

Each player gets to be either a specialist working at Healthy Heart or the Administrator. Of course, special abilities come with these and a big part of the game is leveraging these advantages against the process to reach favorable outcomes for the patients as well as the hospital’s fortunes.  At the beginning of a round, two ambulance cards are drawn that put a random assortment of patients into triage/waiting areas. Their colors indicate their condition and a numerical track represents the severity of it. Black cubes can unexpectedly cause additional cubes to be drawn, which is never good. The goal of the game is to make it through the gauntlet of these ambulance cards with a final score calculated as a measure of Healthy Heart’s prestige.

Each player gets two actions with which to treat patients (their conditions represented by the color of their cube or their bed if they are admitted), transfer patients from triage into treatment areas (where they become bed tokens, representing that they have been admitted) or perform other tasks. The game creates a great sense of a living hospital atmosphere, with a very sim-like range of options and possibilities. You can add expansion rooms such as clinics, break rooms, trauma centers and other facilities to improve your odds of successfully treating patients. Depending on the hospital’s prestige, you can hire support staff like parking security, a PR person, a lawyer, a chaplain and others. Training tokens can improve your character’s abilities and more can be researched.

So it turns out that this game is very much a co-op management sim where the concept is to balance saving lives, improving the hospital, turning a profit and improving the effectiveness of the facility across several areas. Maybe your version of HHH is a major surgical facility but lags in the infectious disease department. Maybe you wind up having to mitigate the effects of paying out settlements, building a morgue to hide extra bodies. Or it could be that you find your hospital overworked and understaffed, ill-equipped to deal with the steady flow of patients that roll in every turn. It can be quite exciting- not that it’s particularly tense or dramatic; the fun often comes from working out a way to reverse negative situations and save lives. After all, that’s how you make money and earn prestige.

Now, high-level, I really like this game and I think it is probably the best game in this setting I have played all things considered. However, I have two fairly major problems with the game. One is that I do not care for the resolution mechanic. Curing a patient is a result of drawing cubes from a bag, with factors such as the location of the attempt, any bonuses from the character attempting it and other factors. The goal is draw cubes of the same color as the type of affliction. The way this works feels very iffy to me in terms of balance, because if you have a lot of cubes in triage it gets harder to treat patients in the wards (who get turned into bed tokens). At the end of an attempt, you get to reseed the bag with cubes equal to the bonus you had, so there is a little control over.

The problem is that with other players making attempts, cubes elsewhere on the board and so forth it sometimes feels unusually capricious as to how difficult an attempt is actually going to be The cubes can be either too dispersed throughout the design or unusually concentrated in the bag or discard. And then there are the black cubes, which can actually case a patient to worsen during an attempt. I don’t think this is a game-breaking thing, but I wish that the design was a little more solid and possibly strategic in this area.

The other element that I’m not crazy about is that there is a lack of detail in areas where it really needed it. This is a very sim-styled game, and where there is detail in the mechanics, the game shines. But in the ambulance cards for example, there’s not really any sense of what these are doing…which is all the same anyway, whether it is “Listeria Outbreak”, “Pharmacy Inventory Scandal” or “Circus Visits Hospital”. They are essentially progressively generating the game state, but there is no context in the narrative. Why do these add, for example, psychiatric and trauma patients? The cards just have titles and then the number of cards drawn.  There are also special ability tokens that are placed in the hospitals main wards, but some of them are just effects with no names or titles. Why does this ward get +1 to a cure attempt? We’ll never know.

It’s almost strange that there are these kinds of omissions in a game that is otherwise perfectly detailed for its scope, depth and narrative. There’s so much care and character throughout- like how British actor Terry-Thomas is one of the administrators (and they all have funny names) and Bruce Lee and Peter Lorre appear as doctors. The illustrations and graphic design are excellent, creating a very pulpy, soapy look that manages to couch the rather serious subtexts and suggestions of this game in a charming, appealing package that fortunately doesn’t get too political or specific for general audiences.

Gary Sax replied the topic: #223785 04 Mar 2016 11:25
I do love games that put you in the position to maximize sort of sinister behavior. Greed, Inc comes to mind, I've heard 18XX too, they make you play a robber baron but not just in the way that you build up a company like a good eurogamer, but it gives you incentives to sometimes take in-game "societally" bad actions to maximize your personal position.

I like the cube mechanic, but I get what you're saying about the balance. You should be able to get a sense of whether a type of cube is more available to treat or not, and doing certain treatments before others and making use of the bonus cube returns is a must. But it is wonky that the types of illnesses that are in most need of being treated (with cubes in triage) are the harder ones. I like that challenge, though.

Also, you're right that there could have been a little more depth to the style of the game. I'd like to see this get picked up by Z-Man or AEG or someone like that, who could give it a little more in development and production.

Grudunza replied the topic: #223794 04 Mar 2016 13:56
Actually, with the glut of Pandemic titles, I can totally picture an adaptation of this called Pandemic: The Hospital, which is a ground-level view of people dealing with the different diseases from Pandemic.

Gary Sax wrote: , I've heard 18XX too, they make you play a robber baron but not just in the way that you build up a company like a good eurogamer, but it gives you incentives to sometimes take in-game "societally" bad actions to maximize your personal position.

Yes. Also in 18XX is very common to simply make everything worse for everyone including you if you can take the hit better than other players. It's really evil hahaha
Read More...