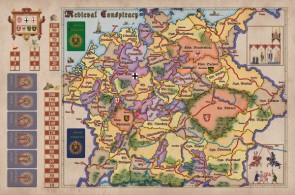 I'm pretty into Medieval Conspiracy right now as a political positioning game with a healthy dose of negotiation, alliances, backstabbing, and a bit of wargame mixed in.

This is based off a dozen or so rounds with only two players to learn the game, so I don't have any strong conclusive opinions as of yet.  Short version is that we liked it enough to leave the game on the table where we left off and pick it up again in the next couple days, but the game really needs more players for all its inner workings to show their stripes.  Below is some overview of how the game players, with very little actual opinion sprinkled in.

It's a kind of negotiation-wargame hybrid.  There isn't a ton of combat, but there is a lot of positioning and threatening and dealmaking.  Basically the goal of the game is to control a majority of the 7 Electorates (territories/fiefdoms) to win by majority vote when a Death of the Emperor event card comes out.  Doing so isn't easy, and I can see the game running 4+ hours with new players.  A good player aid would probably shave an hour of the game just to take the discussion about what can happen and when out of the game length.  Unfortunately the game doesn't come with any play aids so I'll definitely be making some.

You start with a handful of random and probably disconnected fiefdoms and a few troops.  There are plentiful profane fiefdoms and far fewer clerical fiefdoms.  There will be a lot of neutral fiefdoms of both types when the game starts, and you cannot just move into them.  The game is primarily driven by event cards that are auctioned off each round.  They do things like let you get Knights where you can normally only get mercenaries, initiate the death of a lord or bishop which lets you get more fiefdoms (neutral or player-controlled), cards that let you open up another player's fiefdom to attack, and a bunch of other stuff.

The Death of a Lord event cards let the winner of the auction pick any territory on the board and kill the lord present.  Since nobody has a right of succession to a neutral fiefdom, a neutral fiefdom goes up for negotiation for control and if that doesn't work out it goes up for auction. If a player-controlled fiefdom suffers Death of a Lord they have right of succession if they have an heir/child already placed in profane education, which means they have first go at it if they choose.  There are also Right of Succession action cards that let a player who otherwise has no claim to a fiefdom in on the dealmaking/auction.  The twist is that if an auction takes place the winner isn't safe either.  Any other player who bid in the auction who has adjacent troops can flat-out attack the winner.  It's much safer to work the bribe/negotiation angle than let bordering fiefdoms go to auction.  Adjacent players may also join in to aid the attack or the defense.  Death of a Bishop works the same way, but celibacy of the Bishops means that there is no right of succession for clerical fiefdoms, but you need a child/heir already in clerical education to get in on the control discussions.

There are event cards that also allow the winner to open up any player-controlled fiefdom up to attack by any adjacent players who have an heir in education able to control it.  There is also a fate phase each round where each player rolls a die with a 50% chance to either kill a lord outright like the Death of a Lord card or celebrate births and place more heirs into education.  This all sounds like it would lead to a lot of fighting & squabbling, but the expense of troops and the risk of being attacked even after an auction means, at least early in the game, it's far more likely that something will get settled in negotiation before things break down and an auction occurs.

War in this game is most often used as a political chip, a threat that always looms but is costly to carry out.  We haven't experienced the late game yet, but I suspect war to become more prevalent when necessary to reduce a player's ability to gain more Electorates.  The game is ultimately about positioning and rising to power; being in place to grab Electorate fiefdoms when they become available.  War is a tool to do so but not the only one, and an expensive primary strategy.

Income is based on controlled fiefdoms with bonuses for fiefdoms connected by trade routes (roads).  The minimum bid to get into an auction for an Electorate fiefdom is high, to the tune of the cost of 8-12 mercenaries that could otherwise be fortifying your holdings.  You'll also drain a bunch of money into auctions for non-combat types of boons like Castles, Monasteries, Relics, etc.  Electorates are harder to attack once they're held as well, and can only be gained through event cards.  There are 38 event cards, and only two of them are Death of an Electorate.  That means in a 4 player game you'll only see those cards twice every 9-10 rounds or so.  Same goes for Death of an Emperor; you'll only get a chance to win at the twice every 9-10 rounds rate.

The action cards can really help or hinder though.  Some of them are pretty awesome, and some are pretty brutal.  The card text is good about indicating any special timing rules but the big handicap is that some of the best cards can only played on your turn, i.e. when you are the active player for a game round.  Draw a really great action card that can only be played on your own turn, during the player to your left's turn, and you'll have to wait a while to use it.

Some negatives:  The card and board text and artwork is good, but not great.  I don't have a problem with the font choice, but the cards can be hard to read in low lighting, and some of the board spaces get pretty covered by game pieces.  There are well-used trackers for things like Relics and Income and such so you don't need to count up your trade connections each turn, but that doesn't make the sometimes-cluttered smaller fiefdoms any easier to manage.  The decisions to print the rules in that font was mistake.  Printing out the rules in Arial from ugg.de should be order of business #1.  The game length isn't a big issue for me because players stay engaged almost all of the time, outside of the negotiations and auctions they aren't eligible to take place in.  Stickering over 350 wooden blocks was not my idea of fun either.  The game absolutely should have come with player aids.  Lastly, there are some ambiguities in the rulebook translation.  You'll definitely want to walk through the turn-by-turn example at the end just to figure out some of the things that aren't clearly enough explained elsewhere in the manual.  The game isn't particularly complex, but you wouldn't know that from reading the rules as written.

There are a handful of things I haven't touched on, such as the Master cards, how combat works, and some of the more interesting cards that can come out.  I don't have enough time spent with the game to give a solid recommendation, but I'm tentatively really high on it right now.  I'll need to see how it goes with 4-6 players before I have anything more concrete to say about it though.  Alliances will be critical with more players; even in our two-player leaning playthrough we were establishing peaceful borders in a few places just to get our little feudal domains off the ground.

Gary Sax replied the topic: #224583 18 Mar 2016 16:11
This is great content, Wadenels. Awesome write up. Sounds sort of like a Game of Thrones game that actually reflects the source material better---mostly about negotiation not fighting.

Would love to hear someone who enjoys Fief compare it to that.

southernman replied the topic: #224596 19 Mar 2016 10:55
I think the mechanic of having to buy cards in an auction to do most game events would frustrate the hell out of me and I'm used to playing euros, I think that would be a non-starter for my AT gaming group.
I've played Fief but the limited options to do with the titles left me regarding it as basically a wargame, there are more options with titles and screwing people over (Assembly motions and voting) in FFG's Warrior Knights so I'll be sticking to that when we want to feed that need.

logopolys replied the topic: #224597 19 Mar 2016 13:03
I was fascinated by the board design and concept when GMT first announced this, but their refusal to really give any information about the game caused me to cancel my P500 order pretty early on. I'm glad to hear that there's something to it.