13 Days: The Cuban Missile Crisis, or, Twilight Struggle in 45 minutes 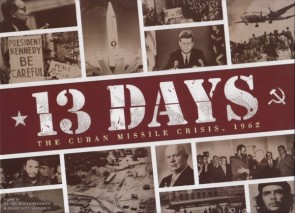 "If the sun comes up tomorrow, it is only because of men of good will. And that's - that's all there is between us and the devil." - Kenny O'Donnell, or rather, Kevin Costner

13 Days is a game that depicts one of the most terrifying moments in modern history. It was a sequence of fast moving decisions and rattling of sabers as both Kennedy and Khrushchev locked horns. Their fingers hovering millimeters over that large red button of death, one misstep leading to tangled fallout of horror and bloodshed. It's bare naked brinkmanship seasoned with tension and it's ripe for gaming.

This small box title passes the eye test from the initial jump. The quality and visual effect is spot on. In addition to a suave layout, the tone and setting is conveyed with just the right amount of editorial control as the graphic design avoids being overwrought or forceful. Yet those black and white photos and trademark Twilight Struggle-esque headlines are front and center.

And Twilight Struggle is the perfect comparison here. Many people have favorably discussed this game by framing it as that GMT classic but in 45 minutes. I love to eat an entire sheet cake just as much as the next guy with a sweet tooth, but sometimes you just want a slice. Maybe because you're saving room for that Blood Rage Pie or perhaps even an Agricola Tart - hey, I don't judge.

The challenge in distilling one of the most revered games down to the short side of an hour is drilling down to what makes the experience tick, and cutting out anything unnecessary. 13 Days does just that.

This is has all the flavor of a CDG without the bloat. Players receive a hand of cards each turn from a shared deck, alternating playing a single selection from their hand. Cards thematically align to the two player factions of USSR and USA, or the neutral UN. You can play either United Nations or your own faction cards for the special event text on the bottom or to command a number of influence cubes listed on the left edge of the card. If you play an opponent's card then they have the option to trigger the effect at the bottom prior to your placement of influence.

The goal here is to place these influence cubes into one of several areas on the board in order to gain control. In some ways this game more closely resembles a two player version of El Grande as the process of scoring is a little less nuanced and opaque than Twilight Struggle. The areas of control include geographical representations of Cuba, Turkey, Italy, and all of the key locations factoring into that tense couple of weeks. What's particularly interesting is that the game doesn't shirk away from its abstractions, including contested areas for world opinion and the media in the representation of spaces for Alliances, UN, and Television.

For some reason I find this exceptionally fascinating and thematic. The game juggles this sense of overarching narrative with its obviously abstract game-play that doesn't quite connect as strongly as its predecessor, but it manages to keep the balls in the air long enough to convince you. It also really nails that sense of dread and tension with two mechanisms that tie directly into its thematic roots like tethers of umbilical cord feeding a starving infant.

The first aspect is one of my favorite and it fuels the bluffing and double guessing that is threaded through play. At the beginning of each of the three rounds players receive three cards that mark possible battlegrounds for the turn. Each player highlights them on the board so the opponent is aware, and then chooses one of the three to keep and discards the other two. The two cards that are kept between both players are the two areas of interest for the turn as they are the only positions that will be scored.

This allows a measured degree of feinting and vocal manipulation as you try to convince your enemy that no, Berlin is not indeed what you're going for. Yeah, I threw a cube on there but I also placed two on the UN, so what's up now you Ushanka wearing troglodyte.

I also dig the fact that these objectives are a two-way street and if I can properly work out which battleground you chose I can swoop in and score it instead. This doesn't happen often - typically you're more concerned about damage control - but it's possible and always at the edge of your mind. It also encourages perhaps risky play and gambits in the final turn if you feel you've fallen behind.

The second, and more pronounced element of tension and thematic tie-in are the three DEFCON tracks. While the majority of this game is a much more streamlined and stripped down Twilight Struggle, here it's interestingly more granular. You have tracks for World Opinion, Military, and Political and they primarily escalate when you place large amounts of influence into territories. The areas themselves are linked to one of these specific tracks and you go up on the DEFCON track one step for each cube you place after the first. So if you push hard into the Atlantic your Military track is going to skyrocket, pushing us to the brink.

The DEFCON tracks also escalate a single place automatically each turn, propelling the momentum of the game forward. The loss condition of having a single track at DEFCON 1 or all three tracks at DEFCON 2 is not evaluated until the end of round. This allows you to flirt with a high track mid-round as long as you can pull it down before the final card is resolved.

The struggle between affecting your plans and not tipping the nuke-stuffed barrel is a palpable tension that eats away at your mind during play. Couple this with the fact that the objective deck contains options to score on the DEFCON tracks instead of the geo-political areas and you have a hell of a mousetrap just teasing you turn to turn. When these objectives fire you gain Prestige equal to the difference between your marker and your opponents, so you can directly feel that shove at your back as you want to throw the pedal to the metal and risk it all.

There's a lot going on here for such a slim and abbreviated experience. It's certainly not as deep as Twilight Struggle and it can feel more abstract due to the stripped away layers and distillation. You also won't cycle the deck of operation cards and familiarity with events isn't quite the strategic landscape it is in its predecessor. Scoring is also more direct and a simpler set of problems to solve. Yet despite these limitations, it unequivocally nails the atmosphere and personality.

For those who haven't dived deep into the epic of Twilight Struggle but sit on the sidelines and smile in appreciation, 13 Days is that title you've been waiting for. This game fills a niche of providing that chewy, cold war CDG experience with a modest time commitment. As a 45 minute political joust this isn't going to provide the layered memories and epic swings of a meaty game, but it is going to prove a noteworthy design that will put a fist in the pit of your stomach and keep your focus on the little struggle of world destruction.

Michael Barnes replied the topic: #225828 14 Apr 2016 00:05
I'm working on a review of this as well and agree pretty much down the line here. It's definitely TS Express. In fact, I felt like I knew what to expect from it as soon as I opened the box and looked over the components. It's actually pretty neat, and it does hit the high points while narrowing the focus to the Cuban Missile Crisis and not the whole Cold War. Hardcore TSers will probably scoff at it, but I think the designers really did well in condensing that design into something more approachable.

charlest replied the topic: #225843 14 Apr 2016 08:41
Yeah, it completely surprised me how good it was. I expected it to be solid, but it's got that pull that keeps grabbing you and wanting you to bring it back out. Every play of this has been two back to back as one game wasn't enough.

Cranberries replied the topic: #225888 15 Apr 2016 01:23
Which raises the question of why not just play Twilight Struggle rather than two hours of Thirteen Days...

craniac wrote: Which raises the question of why not just play Twilight Struggle rather than two hours of Thirteen Days...

That's a fair point, but that commitment to 13 Days isn't required. It's also not quite as deep as I point out so that may be a consideration. I know Twilight Struggle's not a brain burner, but the strategy and effort involved is a step beyond this game.

Sometimes too I'd rather have multiple games in the same time frame as a large one so that I can wipe the slate clean and try again, refocusing my strategy. The process of learning the game and applying that knowledge is a shorter loop.

TS is a great game no doubt and it's worth 2 hours. But this is a very comparable alternative if time, game knowledge, depth or space are concerns.

stoic wrote: I'm a nut for anything that has to do with the Cold War. Where's this game available for sale?

I think it just hit Kickstarter backers a few weeks ago and should be available retail in a couple more weeks. Unfortunately you can't get it quite yet.

Since it's Jolly Roger/Ultra Pro I imagine it will get normal distribution and be available most places.

stoic wrote: I'm a nut for anything that has to do with the Cold War. Where's this game available for sale?

Coolstuffinc has it on preorder for Q2. But, Kickstarter.
Read More...