Barnes on Games- Rebellion in Review, The Game I Forgot About, Imperial Settlers 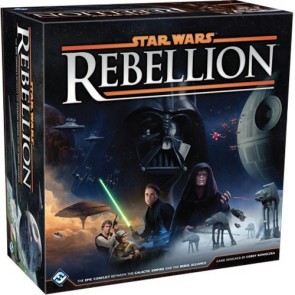 Yeah, it's great. There it is.

Well, here's the review for SW: Rebellion. I pretty much said all I needed to say about it already here in this space and in the forums so it's kind of a boring formality. It's a great game but man, that combat is a big time fumble. Somehow the game manages to represent FFG at both its best and worst. It's definitely worth putting up with the crappy, out-of-scope battles (cards AND dice AND leaders AND unit differentiation AND theater differentiation do not automatically equal depth). It's like there was an impetus to make the game more of a DoaM, when it's really closer to Fury of Dracula. Which means the combat should have been more abstracted and much quicker.

But whatever, it's the Star Wars game pretty much everybody wants, and it's hard to critically penalize something that does so much just right.

Still digging Warfighter, now with three of the expansions. They add quite a bit to the game, especially in terms of the kinds of gear you take out and the encounters. It seems like they've also made the game harder, because I'm flopping just about every mission. I played it with a couple of friends over the weekend and they really liked it, one of them is an Up Front fanatic and he felt like it was a pretty reasonable modernization of that concept. Not to say that it's anything like Up Front (which is WAY more complex/detailed), but there's a similar concept at work. Frankly, as much as I love Up Front, it makes more sense to pull this game out here in 2016. There's a WWII version in Kickstarter now that might be even more like Up Front.

It's weird, I was looking at DVG titles and there was that Frontline: D-Day card game they did a few years ago. I thought hey, that looks pretty good. Come to find out, I actually HAD this game, PLAYED this game, WROTE about this game and SOLD this game and I completely forgot everything about it. WTF! It was a Gameshark review, so it's lost and I actually don't remember what I even had to say about it. Is this what 40 is like?

I've decided that Imperial Settlers is better solo than it is with other people. It has this weird curve where the turns just get longer and longer so that by the end, it's slowing down. I guess this is pretty standard for tableau builders where you have a lot of cards on the table to read/process each turn and then combinations to work out on top of it. But playing it alone with the AI attack deck I've been enjoying it more than I have with others. I got both expansions to look at, haven't tried the Atlanteans yet. And I'm still scoring really low- in the 40s - so I guess I'm terrible at it.

Speaking of games that fall apart with others...Historia...man, what a dud in a group. I've had two three player sessions flop of it at this point and I'm thinking I don't want to pursue another chance. I'm writing a Head to Head with Byron Campbell on it, and I think we both agree that it checks all the right boxes but it's just so soulless. The solo game is marginally fun, and it is the only civ game that you can really do solitaire with, but even then I'm thinking "why don't I just play Planar Conquest on the phone" the whole time. I think it really says something when you can reduce the entire process of the game to a deck of six randomly drawn cards...and the game can beat you.

Fireteam Zero got lost in shipping so that's on the way back out to me. I'm not really sure why I wanted to look at it, everything about it that I've seen looks like typical Kickstarter blandness. But it's coming my way. I also have some things en route from trades- getting Labyrinth back since I'm in this historical games mood as well as Navajo Wars (the winner of my Allstate Safe Driving Bonus contest thanks to Dan Thurot). I traded Geoff for Freedom (which I've been wanting to play for YEARS) and some bucks that I used to buy Silent Victory. Suddenly, I am intensely interested in submarines and I do not know why. It is not a subject I usually care much about. I was thinking about this dude that I used to game with, the guy was just NUTS. He was a real submariner. I have never heard such a filthy mouth in my life and he would just say ANYTHING. So maybe that put me in mind of subs or something, I don't know. Yes, I am going to watch Das Boot tonight.

Discuss this article
Log in to comment
Posts in discussion: Barnes on Games- Rebellion in Review, The Game I Forgot About, Imperial Settlers


I think it really says something when you can reduce the entire process of the game to a deck of six randomly drawn cards...and the game can beat you.

...is what killed it for me too. After something like that the entire game concept loses its luster. The bummer is that the game is maybe one or two good ideas from being really solid.

Frontline: D-day was a game I purchased right when it came out and one which ultimately disappointed me. There's neat things in it but it has some weird flaws and wasn't particularly gripping for me.
Read More...