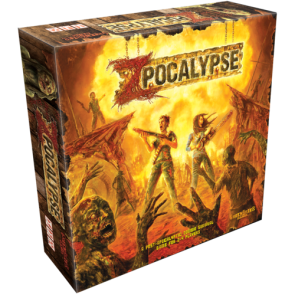 This time, it's for real... ~Don LaFontaine.

I’ve held off on reviewing this, Zpocalypse from Greenbrier Games,  for a while because, at first, I couldn’t really tell if I liked it or if I loved it. In fairness, it’s a co-op of sorts with a pseudo-traitormechanic, so I was already predisposed toward liking it more than something more competitive. In any event, I wanted to get a bunch more plays in, because there’s a lot going on, and I wanted to ably elaborate on what this game entails. Suffice it to say, this is the game I, personally, have been waiting for. I know it’s older, but for some inexplicable reason it didn’t seem to catch on like I believe it should’ve, despite it coming out with two large-box expansions and several small ones. The good news is that you can snag it really cheaply if you missed out on it, and you really should.

If you remember a while back, I did a review of Zombie Survival, a game from Twilight Creations, and the theme was such that it was completely different than anything that had emerged at the time. Well, this game is the logical continuation of that game in many ways, with a truly unique and beautiful production including great bits, custom dice, and a bunch of interlocking tiles. I got this copy from a Fortress Ameritrash user, and have subsequently gotten all but a few of the expansions, which is not something I usually do; take that as an indication of how much I’ve played it and how much we all like it.

The concept of the game isn’t truly novel in most ways; players are simply trying to survive up to 4 days whilst accomplishing a main task and potentially, certain daily tasks for a bonus. What makes it largely different than other survival-themed games is how the game is presented: you start with a little underground safe house that has a few key items, and must survive, foremost, while collecting enough supplies to keep the squad alive and healthy. As you explore and expand the tile-based board, you’re beset on all sides by legions of the undead who will kill you if you’re not careful. These aren’t the usual zombies who take 20 turns to wear you down; these will fuck your shit up with surprising quickness. This system, which I find more realistic than many games, gives players a persistent feeling of impending doom, and worse, as the days go on, they become more fierce.

I noted previously that the production value is very good, and nothing indicates this more than the player tracker boards. These things are as slick as anything I’ve seen, rivaling even  the pegboard system from the original Siege of the Citadel. Everything is on wheels, with your slowest character giving you your speed value and your smartest character giving you your intelligence value. All actions in the game, essentially, are rolls against these values, which forces a division of labor between the players. As you progress, you can find new survivors and swap them out to reconfigure your squads, thereby changing your stats to your current goals. It’s a very slick system that was well thought out, and its functionality is unsurpassed.

The expansions add different things to the game and change it in very cool ways; the ZMaster expansion allows one of the players to take direct control of the zombie side, expanding the game to 5 players total. This is a sea change in gameplay, sort of like if you took the Descent Overlord mechanics and slapped them ontoCastle Ravenloft. There’s cards that the ZMaster can use to harrass and hamper the “good guys”, and it’s actually more fun than I thought because you don’t really need to “go easy” on the human players due to the balance. All in all, it’s a good expansion.

The other big expansion is the ZMergency expansion, which is basically a “more of the same” kind of expansion which gives players a new environment to not get killed in and sort of a knock-on story element where survivors are actually trying to get the hell out of Dodge versus simply not dying. The expansion’s rules pretty much only contain an enhanced version of the base game’s “short game” rules, which amounts to running around and killing shit. That “short game” is fine if you’re looking for a zombie slaughter  game with no brains or story, but if you want the full effect, you really need to avoid that and play the full game.

There’s also miniature expansions with new models and characters, a tile expansion, and some other stuff which isn’t terribly compelling or even, in my estimation, worth owning as it doesn’t add anything to the game. The barricade miniatures are cool as hell, but I have yet to be so rich that I feel the need to drop $30 USD on something that just makes an already pretty game slightly prettier. Maybe I’m just getting old.

In the final analysis, I really dig this game. The expansions definitely give the game new life in different ways, but the core game is fully entertaining and a great time. Turns are surprisingly fast, and the rule book is written very well so the game is quick to learn and refer back to if you forget a rule or two. I’m very thankful to the person who sent it to me,  because it’s a really good time that we’ve all enjoyed.

Why Zpoclypse was DOA
– Half-pregnant traitor mechanic isn’t super compelling
– It’s a co-op, so you need to dig co-ops to play this
– Replay value may be a little bit

Overall:
This title surprised the hell out of us; it wasn’t highly rated or talked about often in the “gamedia” so I kind of passed it over. What a mistake that was; this game is one of the most compelling zombie survival-themed games I’ve ever played. The price is right, so if you’re hungry for a game that’s hungry for you, this is a good choice. I like City of Horror more, if you use “ZOMBIES” as the sole criterion, but on balance, this game does more with less and is much easier to get to the table.

…and see the rules here: http://www.greenbriergames.com/main/index.php/games/zpocalypse/zpocalypse-rulebook/

Rating
4.0
Already have an account? Log in now or Create an account
January 31, 2019
Rating
4.0
Zpocalypse
S
SuperflyPete Top 50 Reviewer 26 reviews
Was this review helpful to you? 0 0