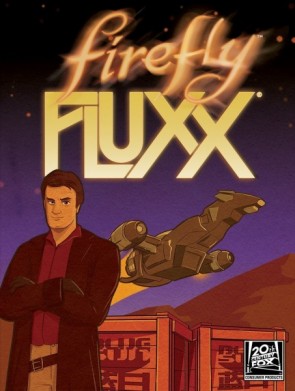 I’m going to be reviewing some smaller/simpler games that tend to be better suited for padawan play rather than a sit down with Jedi Masters.  I don’t know about the rest of you, but once every couple of months or so I’m playing boardgames with people who’ve seemingly never ventured past the nefarious and arcane party game that is Apples to Apples.  When this happens I usually try to bring something small and weird to nudge people out of their comfort zone.  Well, that and so I’m not stuck playing Trivial Pursuit - Jersey Shore Bro-FIST Edition.  First up in this series of reviews is - Firefly Fluxx.

Fluxx is not a new game.  It’s been around.  It’s seen some things.  These days you can find the game dunked and flavored in just about every license and theme you can think of.  The latest iteration from Looney Labs comes barreling off the boat with a dash of Malcolm Reynolds as it is set in the ever popular Firefly Universe…’Verse.  I’ll head you off at the pass and let you know upfront that the Firefly theme is merely a dusty façade.  This is essentially vanilla Fluxx with Creepers (bad cards) and Surprises (instant/play anytime) cards.

Fluxx earns its name from the fact that as you play everything is in a constant state of (wait for it)….flux.  On your turn the cards you play from your hand will literally change the rules for the rest of the game.  Or until the guy sitting next to you changes them to something else on the very next turn.  The whole thing feels like trying to navigate to a Taco Bell in a wacky cartoon world.  You think you’re doing well and then *POP* someone plays a card and instead of riding in a Corvette you’re sitting on an ACME brand anvil.

Winning in Fluxx is all about matching “Keeper” cards, which are various different characters and objects from Firefly, to the current goal card.  This is easier said than done.  You see along with changing the rules like some power obsessed lawmaker; you can also change the goal.  Do you notice your pal has Jayne sitting in front him and is one keeper away from victory?  Well, you can slam down a new goal and crush his dreams of singing a celebratory song in Jaynestown.

The Firefly brand is essentially just another form of tomfoolery within the confines of the game.  If you have Mal in front of you and someone else has Serenity you can swipe the ship on your turn.  Each member of the crew sort of works like that and it adds another layer of “take that” to the merry-go-round of desperately trying to fulfill a goal.

As I brought this game to numerous different game nights a few things stood out.  The first game was almost ALWAYS a clumsy chore to play through.  I found players really had a hard time with the action cards which can read like wordy tomes to new gamers.  The constant changing of goals and rules would initially throw people for a loop too.  Still, after I thought they had a miserable time they always demanded a second game.

It turns out that Firefly Fluxx works just fine in a family game night situation.  I think part of the reason is that the game does a good job of giving new players the illusion of choice. As play goes round and round everyone THINKS that they can eke out a sneak attack victory.   People will hold onto an action card, rule, or goal card because they think they can pull off some Wile E. Coyote style gambit and win on their next turn. When in reality, the game state shifts so much that the effort is akin to building a sand castle directly abutting the ocean as the tide is coming in.

I noticed that people seemed to love the escalating tension that occurs when the current goal card is close to being fulfilled.   People fear each new turn will be the last.  They’re not wrong, as most games typically end when a player luckily draws the exact keeper card they needed.  Games are usually short enough that after a single syllable curse word or two someone starts shuffling to play again.

Firefly Fluxx plays up to six people but sadly it doesn’t handle a crowd particularly well.  It’s not uncommon to host a game night with six or more friends.  If you’re playing with six then Firefly Fluxx’s issues become way more apparent.  You see each player at the table equals another turn before it gets back to yours.  That means the game state is going to look like a tornado just upended everything by the time it gets back to you.  I think three or four is probably the sweet spot with this one.

Time and time again, Firefly Fluxx proved to be a success at these family and friend game gatherings.  Fluxx is like offering someone K-cup brewed coffee.  It's not as good as a cold brew coffee or when someone uses freshly ground beans with a French press.   No, Firefly Fluxx is the caramel-vanilla-cookie K-Cup of card games.  Gamers with sophisticated palates need not apply.  Then again, that’s not the target audience for this game.  It never has been.  Fluxx seems to shine best with people that are just beginning to dip their toes into the gnarly depths of boardgames.  New gamers seem to enjoy the odd, fluctuating beat that this game series happily drums along to.  If you’ve got nerdy friends and family over for a casual game night you might want to brew them a cup of Firefly Fluxx.