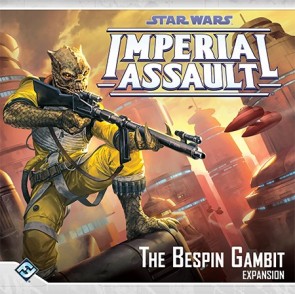 Everyone might agree that Empire Strikes Back is the best Star Wars film, but for me Cloud City was always the least interesting place in the whole canon. A generic sci-fi floating city headed by a more jocular and more corruptible version of Han didn't fire my imagination. Nor did it fit with the techno-junk aesthetic that unified so much of the franchise so brilliantly. Finding the latest Imperial Assault expansion was set there was something of a disappointment.

Opening the box offered further unfortunate surprises. Apparently Cloud City's Wing Guards and Ugnaut scavengers belong to the Scum faction. Inevitably there were campaign missions using local characters - Lando, Bossk and a new Imperial spy called Agent Blaise - which were represented by tokens instead of figures. Naturally, you could pay extra to buy them as mini expansions. I know this is par for the course in IA but c'mon, three figures?

Dig deeper, however, and things start to look brighter. Like everyone else the first thing I do when opening up IA expansions is dig to the bottom and find the figures. And they're a delight. FFG are on a real upward trend when it comes to model quality and these are a cut above anything else I've seen so far, well posed and detailed. If you do get the Lando and Bossk figures you'll find they are particularly good, full of movement and character.

Same goes for the new tiles that come with the expansion. While I'm not convinced that the game really needs much in the way of new board pieces, what we get are printed with quality art, evocative of the lazy luxuries of the Cloud City environs. There's even a carbonite freezing chamber from which you can, quite literally, rescue Han in one of the new skirmish missions.

That highlight aside, the base expansion is a mixed bag in terms of skirmish additions. The Wing Guards are just generic troopers for the setting. Ugnauts are a bit more entertaining with the ability to raise up irritating junk droid reinforcements on the fly but still nothing special. If you're happy using the supplied tokens for Lando and Bossk you'll find them more interesting and colourful. Lando lives up to his description of "charming gambler" with a couple of dice-switching abilities. Bossk, on the other hand, is a combat terror with some big stats and an unfortunate tendency to gun down everything in his path, friend or foe.

Campaign wise, however, the Bespin Gambit is a triumph. It comes with a six mission campaign, fitted snugly into a choose your own adventure style narrative arc. This is a neat idea that adds hugely to both replay value and atmosphere. Plus if, like me, you found the base game campaign intimidatingly long, here's a way to play some interconnected sessions over just a few short nights.

Whichever campaign you want to play, you'll also benefit from the new characters in the box. Previous expansion characters have had an unfortunate tendency to look a lot like the ones in the base game. This one adds some much more novel concepts. One is a stealth Jedi which looks and sounds odd, especially with his oxymoronic "shrouded lightsaber". In play, though, he proves more interesting with his abilities to hide and create force illusions, even if they do mostly boil down to combat buffs.

The other is a hammer-headed Ithorian spy. Everything about this character stands out from his suitably freakish-looking miniature to his abilities, one of which allows him to misdirect weak enemy figures into attacking their colleagues. This is not only vastly entertaining but adds to the strategy in the game, with both sides trying to create or diffuse situations where this potentially devastating power can be used to maximum effect.

So, however you feel about Cloud City as a place, the message from this expansion seems to be clear. Campaign-focussed players will have a blast with this. Skirmish-focussed players, on the other hand can pick up the character expansions and be done with it. Unless they fancy the lure of a short campaign, that is. Now, who's taking bets on the next boxed expansion being full of Ewoks?

Jarvis replied the topic: #230346 18 Jul 2016 07:58
Apparently Cloud City's Wing Guards and Ugnaut scavengers belong to the Empire faction? One might have though that Mercenaries or Scum...

Those two groups do belong to the Scum faction. The only Imperial generic troop was in an expansion pack.

Jarvis wrote: Those two groups do belong to the Scum faction. The only Imperial generic troop was in an expansion pack.

Ok, basic journalistic fact-checking fail. Apologies, everyone and thanks for flagging.

Egg Shen replied the topic: #230387 18 Jul 2016 13:00
Thanks for the review! Love to see expansions covered as they never seem to get enough love. I think the mini expansions are the only way to play Imperial Assault. I really dislike the crazy long adventure in the base game.

I'd be perfectly happy if they just released these smaller, cheaper expansions from here on out.

Michael Barnes replied the topic: #230402 18 Jul 2016 14:22
My MM review this week is for this...they have GOT to get a Road to Legend style thing going for Imperial Assault. I do not think I will get another expansion that requires an Imperial Player.

Michael Barnes wrote: My MM review this week is for this...they have GOT to get a Road to Legend style thing going for Imperial Assault. I do not think I will get another expansion that requires an Imperial Player.

Yep, I think you're likely right. If RtL has been developed sensibly, it ought to pretty much be a matter of just re-skinning it.

On the other hand, RtL is the only reason left to play Descent over IA, really. So they may be unwiling to hammer the final nail into its coffin.

Another thought occurred to me. And this may be an IP/licensing issue. But remember how they came out with the Arkham Horror painted minis ? Why not do the same for IA ?

We did the whole campaign, me and my two IA friends, but we all agreed that we kind of didn't want to do another...and these are two guys I had done Road to Legend with, and the whole time we were thinking about how much better it would be.

If they do go with an app, I hope they just do smaller campaigns too. These long-ass Descent-style campaigns are fucking pointless. There's no real development in terms of story or character. You get new skill cards, the Overlord/Imperial player gets more stuff...there isn't any true change over time. It's just a way to drag it all out and make people feel like they are progressing toward an overall goal. It's an illusion. And I think this is the case in most campaign-driven board games, barring the legacy stuff.

Egg Shen replied the topic: #230432 18 Jul 2016 19:29
Yea, I'm pretty much done with campaigns in general too. I get that some people like to invest in one product and go nuts. Over time I've learned that I'm not one of those people. In fact if I find out that a game only offers a campaign style of play I'll likely pass. Doing one shot adventures is way more fun. I like being able to reset, try a different character next game etc... Plus in most campaigns it's the same damn thing...nothing matters until the final mission. The whole thing is building towards this finale. Well, like Barnes said, it's bullshit. The Legacy style games sort of correct this by making big ass changes from game to game. However, one thing that is dumb as shit in these games (but unavoidable) is that again, losing doesn't matter. In Pandemic Legacy you could lose the first six times you played and you just keep pressing forward to the next month. The world doesn't get engulfed in Devil Syphilis or anything cool. You just repeat the fail mission rules, get what you get, pop open a box or two and pretend that the whole world ISN'T itching it's crotch to death.

I understand why they're designed this way, but it gives campaign style games this artificial sensation that really rubs me the wrong way. The only reason I like the Imperial Assault Expansion campaigns is because they're relatively short. I only like Descent RtL because I can solo that shit at my leisure. Or we can spend a day and crank out the mini campaign on a Saturday if so inclined.

The ironic part is that for many years I lamented the fact that there weren't any games that focused on campaigns. Now that they're here I'm sort of realizing that, yeah, I don't really want em.

I sort of hear where you guys are coming from. There so much more to gain from an rpg campaign over a board game one. The differences just don't compare and I think that desire for that same sort of narrative and meaning is why we keep banging at these tabletop dungeon crawlers.

No gaming experience can compare to a well run league. The injuries, the star tracking, the between match trashtalking and newsletters, the anticipation of a rival game or facing a surging team. It can be an amazing experience that simply can't be repeated in one and done play.

Egg Shen replied the topic: #230449 18 Jul 2016 22:56
I should clarify and say that I'm specifically talking about campaigns in boardgames. RPGs, Blood Bowl...yeah those are a different story. I get the appeal of those and think they are A-OK. I don't think the code has been cracked in the boardgame world. The primary culprit is certainly the Dungeon Crawler genre which in recent years has seen a glut of campaign style boardgames.