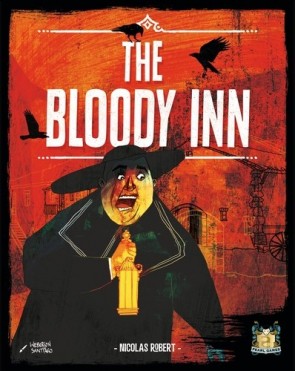 Sometimes I let my inner Brett Michaels get the best of me.  When it comes to boardgame themes and settings I need a chance just to get away.  I gotta get a break from the same old, same old.  So in my never ending quest, looking for nothing but a good time, I tend to search every nook and cranny for weird games.  Make no mistake, The Bloody Inn is WEIRD.

The first noticeably odd trait of The Bloody Inn is its theme.  Each player is a family member that owns an inn.  Business isn’t going so hot, so you all decide that the best way to earn the maximum amount of coinage is to just start murdering blokes staying at your Inn.  Why take just a single coin for a nights stay when you can relieve them of ALL THEIR MONEY?  The theme reminds me of the classic Vincent Price film, “A Comedy of Terrors”.  While that is technically a horror film, it’s mostly played for yuks.  The Bloody Inn is similarly a game that I don’t think is meant to be taken seriously at all.  Hell, I can ALMOST hear imaginary plucky, playful, and bumbling string arrangements while we play.

When you bust the game open you’ll notice that there is a small board that represents the titular Inn, a few wooden tokens, some cardboard Francs, and a big ol’ deck of cards.  At first glance you’re probably thinking that this is going to be a fairly light and silly card game.  Feel free to get fooled by that red herring and you’ll lose just about every game of The Bloody Inn.  Make no mistakes, this is a Euro game…and a fairly crunchy one at that.

The game revolves around a deck of “Guest” cards.  These cards represent visitors that are staying at the Inn.  Each visitor has a rank of zero to three.  There are several actions you can take on your turn, but to interact with a visitor you will need to “pay” their rank.  In game terms the local degenerates and poor people are rank zero/one.  While the wealthy folk tend to all be expensive level three cards.  What is the currency you need to pay you ask?  People.  My GOD…IT’S PEOPLE!!!!

Ahem.  At the start of the game you have a hand of precisely two peasants.  These two scamps are what you will use to Bribe, Murder, Build and, Bury.  Let’s say there is a rank one policeman staying at the inn.  You want to bribe him and add him into the fold of your murderous posse.  As an action you will need to discard cards from your hand equal to his rank.  In this case it will be a single card.  In game terms you sent out one person from your crew to bribe the policeman and he immediately becomes part of your hand.  With a murderous glint in his eye he is ready and willing to do your biddings.

This is important because each guest usually has a symbol at the top of their card which means they are proficient in something.  For example, our recently bribed policeman has a gun symbol on his card.  This means that if you murder a guest at the inn and you “pay” with the policeman card you only need to show it, rather than discard it.  So while peasants must always be discarded, other guests can remain in your hand and won’t need to waste further actions bribing/recruiting new hoodlums.

I hear you saying, “But you’ll just ditch the peasants and upgrade your hand with fancy cards almost immediately.”  Sure, you can.  Let’s say you bribe three cops and intend to use them as your personal murder squad.  At the end of each round you need to spend a dollar per card in your hand to “pay wages” to your malevolent malcontents.  If you’re hand is constantly full of cards at the end of rounds you’re losing “bookoo” bucks over the course of the game.  In a game where victory belongs to the richest player, every penny counts.

To make your financial situation even trickier is a money track in the middle of the board.  This keeps track of each player’s cash flow, but it will max out at forty Francs.  If you’re maxed out and want to get more money you need to waste an incredibly important action by “passing”.  Passing will allow you to “launder” money in increments of ten.  There will come a time when you screw up managing this track of liquid assets and lose out on potential corpse cash.

As you can tell there is a lot to think about and the game is really about careful planning.  The Bloody Inn cleverly uses cards for multiple things and it’s a simple mechanic that I’m smitten with.  Guest cards are used as “payment” for actions, they can become buildings that give you special abilities, they can be corpses that are worth loot etc… Figuring out how to successfully utilize your hand is the entire game!

The main way of making money is through the business of murdering guests.  Like some deranged Lizzie Borden wannabe you must hack your guests to bits and bury their remains to get all their money.  In a sadistic move, this requires precisely two actions.  Your first action must be spending cards to murder a guest at the inn.  This creates a corpse (you flip over the guest card to reveal a coffin with a money amount).  Once a corpse is on hand, you need to pay the guest’s rank again to bury them in one of your empty buildings.  In a game where you’re given EXACTLY two actions per round this requires a little forward thinking.  Luckily, you don’t need to bury a corpse immediately.  You can keep a dead body lying around as long as there are no police-officers remaining in the Inn after the round ends.  If a cop remains, it will snoop around for bodies.  Any player caught with a rotting carcass will need to pay ten bucks to the local grave digger to ditch the body.  This means losing ten dollars AND the money the guest had on them!  It’s brutal.

To make matters even more cutthroat, you don’t have to bury bodies in buildings you own.  Nope.  You can bury a corpse in ANY other player’s tableau of buildings.  They don’t even get a say in the matter.  You just split the corpse's loot as hush money and continue on your merry way.  I’ve seen games where this is never utilized and others where it’s a primary tactic.  It adds another layer that you need to be cognizant of when planning out your unscrupulous deeds.

I can say with a fair amount of confidence that The Bloody Inn is one of my favorite card/Euro games in recent years.  It’s a game that screams QUIRKY, but has excellent gameplay to back it up.  Like a five star resort the game seemingly offers you never ending options.  Do you try to kill low valued guests each and every night in hopes that slow and steady wins the race?  Or do you fancy taking out a wealthy prince that will give you an influx of mega cash?  Perhaps you’ll try to screw someone else over so that the police will discover a body and they’ll lose out on some gold.  Each time I play I feel like I’ve got some new interesting angle to exploit.  Of course like any ill thought out plan it’s likely to go awry at a moment’s notice.

That is the black heart that lies at the center of The Bloody Inn.  Rounds play out like some slapstick folly, where you’re just bound to muck up part of your evil scheme.  You’ll think you’ve got something good going and then realize you’re out of actions.  And there are three cops staying at the inn.  And you have 2 dead bodies in front of you.  While I personally like that, I can also see it being the biggest detriment to the game as well.  As you play, it’s like a noose is softly hung around your neck.  Each turn it tightens and constricts as you try to balance on an ever teetering wobbly chair.  If you HATE games where it never feels like you can do enough, you will inevitably despise The Bloody Inn.  You only get two precious actions per round and you always feel like you need four or five to get something done.  It’s brutal, but I find it creates a palpable urgency to each and every round of the game.

In short, I love this game.  I think it works well at any player count and the game comes with options for shortening or lengthen the experience.  Each time you set the game up a certain amount of guest cards remain in the box.  So you’re never quite sure what to expect/plan for.  The theme is not meant to be taken seriously.  It’s incredibly macabre, but in sort of a French absurdist way.  I adore it.  The art style is superb, the actions in the game cleverly tie into the theme, and it all comes together for enjoyable, albeit bizarre, experience.   If you like your games to be QUIRKY and different then this is a winner.  If you need a break from the same old, same old, then The Bloody is nuthin' but a good time!

The Bloody Inn rates as Look What the Cat Dragged In

I also find that the surreal artwork on the cards adds to its twisted nature--it had to be intentional--like looking into the mind of a serial killer.

Let's hope that repeated plays of Bloody Inn and its insane artwork don't cause a scene like from this movie, Night of the Generals.

engineer Al replied the topic: #233508 07 Sep 2016 12:36
Great review, as always! I very much enjoyed playing this strange game and would gladly play again. Perhaps eventually I will be able to wrap my head around it. . .

Seriously, for as much as I love this game I truly suck at it. In 10+ games I've won maybe once. I think that is a testament to how engaging the design is. Each time I play it I'm so sure and confident that I will be able to successfully murder my way to success. Then about 60 mins later I usually end up with a pile of corpses and no glory for my efforts. I feel like Doctor Claw. "I'll get you next time Gadget! Next time!"

Gary Sax wrote: Thanks for putting this on my radar!

My pleasure! This is just the beginning of my efforts to help Josh Look take over the site with horror themed content. He'll be doing the movie reviews and I'm going to be bringing horror boardgame reviews and articles each and every week from Sept thru Oct. I felt like The Bloody Inn was a good first article because it's a little less subdued than your average horror game. I know some folks aren't quite ready for Zombies, Vampires, Universal Monster Movies, and Werewolves on Sept 1st like Josh and myself are. You guys only get one week of prep though. After this expect more stuff that is knee deep in the horror genre!