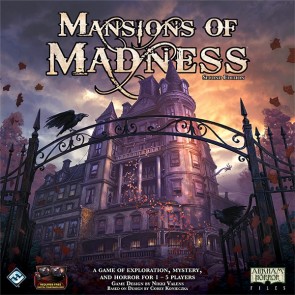 This new edition of Mansions of Madness is a box full of paradoxes. It feels bold and inventive, yet has an obvious design lineage to its original edition and to other app driven games from Fantasy Flight.  It offers the sense of close co-operation between players but has little real meat or strategy. It provides adventure and mystery while actually being quite repetitive. Making sense of it is enough to drive you insane.

At the core of the confusion is the software which drives the game. While using an app to turn a co-operative game into a richer role-playing experience isn't new, this takes it to a new degree. Players pick a scenario from four of varying lengths. The app then lays out the map as they explore, adding clues, monsters and layers of narrative as they go. Story drapes everything like a shroud: each action and encounter gets clothed in context and each scenario has a bare-bones plot. You even solve some puzzles on screen in the form of tile-sliders and Mastermind style conundrums.

First time out of the box the result is exhilarating. Here the division between quickstart rules and a longer reference works like a charm, getting you up and playing in no time. Most of the mechanics boil down to rolling dice trying to accumulate as many successes as possible. Yet from this, the most extraordinary adventures unfold. Slamming doors to trap hideous monsters in a burning mansion as you escape with occult tomes. Fleeing from a deranged mob, desperately gleaning evidence while you wait for your rescue to arrive. The degree of detail is unprecedented and utterly captivating.

Second time you attempt a scenario, after an inevitable initial failure, things begin to fall flat. You'll find that for all the narrative variety on offer, each has an identical structure each time. There's also a limited variety of map layouts: at least one scenario always uses the same one. Once you've explored the same house a couple of times over, the thrill of discovery dives down. More so once you understand how each scenario unfolds and what you have to do to win.

Yet that fixed structure is a big part of what keeps the game interesting. With so much hidden information and most of the mechanics being dice rolls, learning how to pull the levers in each adventure is key to the strategy. It's not the only place your decisions can make a difference. Ensuring each character gets outfitted with the gear to make the most of their stats and abilities is important. So is the rate at which you risk spreading out to explore versus the safety that's found in numbers. But learning how to quickly and safely find key items and characters in each scenario is critical to the replay appeal.

So when you eventually win at any given adventure, interest in replaying it plummets. It's like re-watching a cheap horror film: still hokey fun but all the scares and surprises are gone. Mansions does what it can to extend interest. If you've got a copy of the old edition you can use the monsters and tiles to add variety. Best of all are the brilliant insanity rules some of which give mad players a new, secret individual win condition. The chances of at least one character losing their marbles is high, and the resulting panic and suspicion is electrifying. Suddenly, how the game will end is back in doubt. But the fillips these provide are minimal.

Once you're tired of a scenario you can, of course, start a new one. But with just four included in the basic app, and one of those suggesting an awkward 4-6 hour play time, options run thin fast. That's poor value from a game at this hefty price point. Especially when much of the money has gone on awful and unnecessary miniatures. Lovecraftian horror works best with the unseen and indescribable. Picturing it in art is difficult, sculpting it in plastic is laughable. Even more so when the bases are so big you can't stack more than one in a room. We left the monsters in the box and used the stat chits you're supposed to slot into the base.

For all these issues, it's worth re-iterating that the first play of a scenario is an extraordinary, singular experience. All good narrative board games build a story as you play. Only in Mansions of Madness can you enjoy genuine twists and shocks as events unfold around you. As the app plays the noise of a creaking door and shows a us grand hallway full of scattered papers and a sinister portrait we all get a tiny thrill of fear. That alone is an astonishing achievement: to feel scared by mere cardboard in the company of your friends. To play and see things come alive, monsters moving at their own pace, villains who don't politely wait for your intervention, is gripping.

How this game runs into the future is, like everything else in Mansions of Madness, dependent on the app. We already know there will be expansions. Re-releases of the material from the original are in the pipe with new scenarios in tow. But they're expensive and full of more clunky plastic. What we need is a drip of new scenarios without new components at rock-bottom prices. And I hope we get them just so we can experience that first-time thrill over and over again. Otherwise I fear this unique game will die a death more horrible than any of its Lovecraftian protagonists.

May 02, 2019
Rating
4.0
Mansions of Madness 2nd Edition
Playing each scenario for the first or second time is a gripping treat, but the replay value is near nil.
MT
Matt Thrower #1 Reviewer 286 reviews

Legomancer replied the topic: #234121 13 Sep 2016 12:47
The app is fine, but as I said elsewhere, it almost forced one to wonder why there was still a board element. The app doesn't track everything, but it certainly could, and much of what was happening on the board seemed superfluous. I felt like I was playing a $100 boardgame that assisted a free app, rather than the other way around. That seems odd.

The app is fine, but as I said elsewhere, it almost forced one to wonder why there was still a board element.

Lots of reasons. First and foremost it's a central point for the game which all the players can see and interact with. Doing the same thing on the screen just loses the sense of scale and focus that a physical board has which has implications for both practicality and immersion.

Second there are several aspects where cards actually do a better job. Swapping items around between characters for one. Hiding insanity for another.

So while I can see your point, I think using the physical components does add a lot to the game.