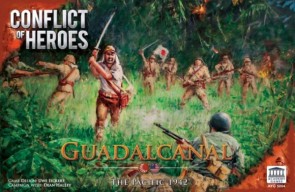 History starts at home. So when I began to dig into the past, I did so first in Britain and then in Europe. The remote, surf-swept volcanic islands of the Pacific seemed a long way away, even when our Imperial past reached out to them. Even when I watched Bridge on the River Kwai and read Helmet for My Pillow. Terrible things happened there. Terrible yet important things but they were too far away to touch me.

Then they arrived on my doorstep in a big box of chits and boards called Conflict of Heroes: Guadalcanal. As bright and chunky and well-produced as Conflict of Heroes games always are. And I couldn't ignore them any more. In came the Marines and the Japanese, into my house, and they died by the dozen on my living room carpet.

That's the power of Conflict of Heroes. You learn one simple system and it works across all of Russia and out into the ocean and right on those tiny atolls of rock. It's too much fun not to try it everywhere once you've learned. Each player takes turns taking a single action with a counter. Move one hex or fire by spending action points from a pool, with the actions themselves costed differently by unit. An easy way to model command and control systems across different armies.

Taking one tiny action at a time like this makes things move quickly, keeps both players engaged. Yet each brief moment has the potential to snowball into something deeper. You're only allowed one active unit at once, so if your enemy starts doing something far away from your current unit, what do you do? Abandon their remaining points to waste and activate another? Use some of your miniscule pool of flexible command points to react? Spend a whole unit's activation to take a single action? The answers are never obvious, and your choices haunt you through the firefight.

We'll not dwell overmuch on the ups and downs of this brilliant system. It allows easy rules to mimic a fair amount of historical detail while keeping things fast and tense. The cost is that it's gamey, and encourages players to try and wear down enemy activations so they can take actions unhindered. If you want the details, it's in my review of another game in the series, Awakening the Bear.

Instead, lets look at what's unique to Guadalcanal. Two things, mainly. The first and perhaps most surprising is that the US and Japanese forces now have different infantry damage markers. These get drawn at random when a unit is hit by fire and, usually, impede the victim in some way. Pinned units cannot move, for example. There's a third set of these counters for tanks which is much reduced compared to previous games in the series because the number of tanks is much reduced. Not seeing much action on Guadalcanal, they're limited to only a couple of scenarios.

Anyway the reason for the two separate pools for infantry damage is that the Japanese have a number of highly unusual counters. "Berserk" counters encourage headlong charges into close combat, for instance, while "no hit" counters literally do nothing. They place no restrictions on the unit, and if a "no hit" unit gets hit again the counter evaporates like flare smoke instead of killing the unit. Except the US player won't know this until it's too late because damage markers are face-down until their effect comes in to play. By which time she'll probably already have two squads of Marines moving up to tackle what looks like a half-dead dog only to find it's very much alive and biting.

This is, of course, an invitation to any number of mind games. Is that unit not moving because it can't move, or because it doesn't want to move, or because it wants me to think it can't move? You look and you wait and you take risks and a little sweat pools in the palm of your hand. Just like the conundrums facing real-life Marine commanders. Except less so because it's just dice and cardboard and not real men you're sending to be blown apart on a barren rocky island in the middle of nowhere.

The other change is the addition of Bushido points for the Japanese commander. The things you do to earn or lose these and their precise effects depend on the scenario. Generally they reward you for following Japanese textbook training and tactics and punish you for not. In once scenario you earn points for keeping units hidden until the last minute. In another you actually get bonus points for sacrificing your own troops in close combat.

It's a great system in the same way the rest of Conflict of Heroes is great. It models a lot of historical detail very cheaply. Except that this isn't as cheap as it first appears. With a unique set of Bushido rules for every scenario it's easy to forget them in the heat of battle. On the other hand they add an extraordinary gamut of experiences and emotions to the game. As a US commander watching enemy infantry rush your lines and knowing they'll hurt whether they live or die is an exercise in mechanical terror.

My box came with a sheet of expansion counters for US Army units. Right now there's only one scenario that uses these, which you can download from the Academy Games website. It's a fairly involved setup which will put off less experienced players. On the plus side, the scenario ties in with one from the box set, extending its sense of historical narrative and authenticity. On balance, the extra units feel like something mostly for completists.

Fundamentally, the new aspects of Guadalcanal work well but they don't make it into a whole new game. If you like the Eastern front excursions, you'll like this and there's plenty new to enjoy. If you don't, nothing here will change your mind. If you're new to the series it's not a bad place to start. The Bushido rules are less complex than the vehicle ones and vehicles take a back seat in the jungle. Otherwise it goes back to where we started. History begins at home: how near to your home and your heart are the trials of the Marines in the remote Pacific?

scrumpyjack replied the topic: #235715 06 Oct 2016 21:52
Great review Matt! I watched The Pacific recently and I was looking for copies of CC: Pacific, but I think I'll have to try this one out first.

Cranberries replied the topic: #235819 09 Oct 2016 00:27
I've owned and sold both Awakening (1st edition) and Storms of Steel, and regret it. I'm leaning towards repurchasing Awakening, however, because of the possibilities afforded by the admittedly complex solo module.
Read More...