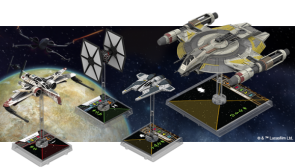 The first time I took delivery of X-Wing ships, their quality just blew me away. Over nine full waves and the odd side release, we've become bored by perfection. Cracking open the clamshell on this batch, assembling dials and storing away the models felt almost mechanical. Then I sat down to makes some lists to test them out. It took two hours to make one competitive fleet for each of the three factions. Two hours I could have spent playing instead.

I know that for list based games like X-Wing, making rosters is kind of playing. But it's become so heavy with options and upgrades that unless you've invested in it as a single game, it feels more like a chore than fun. Then, before each game, I found I had to sit down with my list, go over the choices, remind myself of how all the combos worked. I began to question whether it was worth it.

The first game I played was an epic game: I took a Rebel and a Scum list against one with an Imperial Raider. And it wasn't until I'd stood the models up on the table that I realised I'd stopped looking as I'd unpacked them. Some of these new ships are gorgeous. The ARC-170 in particular is just stunning. Those three layer wings, that battle-damaged and asymmetric paint job, the shiny cockpit. Just magnificent.

And as we joined battle I remembered the essential joy of X-Wing. It's not in clever combos. It's in seeing the incredible sight of these models mixing it up on the table and throwing dice around. Who cares which side emerges victorious: everyone wins just by watching the fight.

Sometimes it feels like this wave of ships is with me on this. None of them is massively powerful. Several of them, including the ARC-170, focus on unique over generic pilots, meaning it's unlikely you'll ever field more than one or two. Indeed the Shadow Caster seems built for entertainment value over brute force. It's strikingly similar to the Firespray, a ship not known for its competitive edge. What it does have is two illicit upgrade slots which offers up the possibility of some gloriously surprising builds.

On the other hand, sometimes it feels like this wave of ships is desperate to add more complexity to the game. Our Shadow Caster has this weird mobile firing arc where you can take an action to change where it can shoot. It's another tactical option to take but it's also something new to faff around with. Indeed, fiddling with firing arcs seems to be a bit of a feature of this wave. It also features the first two small ships, the ARC-170 and the TIE s/f to have rear firing arcs. Having that on the TIE, in particular, makes me wish there was a Poe and Finn pilot card, but no such luck. It's an imperial only ship.

The other unifying feature on these ships is a focus on titles. The two aforementioned ships both come with zero point - i.e. always-taken - titles that increase their stats and abilities. I get that this is to avoid over-cluttering pilot cards but it still feels like it's adding fiddliness to the game. Titles are also a big part of the new Imperial Veterans box set which aims to make TIE Bombers and TIE Defenders better. The former get an excellent shuttle title to give them crew slots and enable them to act as cheap support craft. The latter get two titles which upgrade offensive or defensive capabilities as desired.

I'm aware that TIE Defenders are seen as overcosted, but they're also ridiculously powerful which lots of shield, evade dice and a white turn manoeuvre. They now also have some truly terrifying pilots and super flexible options and may, in fact, be overpowered. The TIE Bombers get some similarly awesome pilots but that just makes up for the drag factor of flying a TIE Bomber. It's clear from the pilots and upgrades that FFG is trying to get more bombs and missiles into the game by tweaking their abilities as the metagame changes. But again, this is faff and confusing to people who don't understand the history here.

Our final new ship is the Protectorate Starfighter for the Scum faction. In many ways, this is the most interesting addition of the lot. It's got a similar but slightly superior stat line and dial to a TIE interceptor and is obviously intended as a high manoeuvrability fighter. You could fly five of the generic pilot in a swarm, which would be interesting. However, the ace pilot skills, title and upgrade reward the player for being inside enemy firing arcs at range one, which is the last place a manoeuvrable fighter wants to be. It's effectively a gamble. This thing can put out a ton of firepower within those parameters but if it fails to kill its target then it's likely to be toast itself. It's a bold design, but it'll take an experienced player to work the combos and get the ship into the right places.

And this, really, is where we are with wave nine. Pandering to experienced players. With a glut of free titles, hard to use ships and tweaks to all sorts of ordnance to make them viable X-Wing feels more and more like a law unto itself, a prickly ball to those coming at it for the first time. That's bad news for the new players who might pick it up due to the TIE-ins with the new movies. A fun base set then, when you start collecting upgrades, chaos and confusion.

When digital CCG Hearthstone had a reset recently, we all reflected on the necessity of this for any game with an endlessly multiplying series of expansions. Magic went there, so have many other games, It's hard, but necessary. It's starting to feel like X-Wing is entering the same territory. One answer is a split in continuities: one series for the original trilogy, another for the new films, maybe even a third for Rebels and other popular TV spinoffs. If FFG don't do it, I might do it myself, just to avoid spending an as long making a list as I get to watch the models gracing the table. I know which I think is more fun.

The game is in a better spot now than it has ever been. Sure the learning curve is not a low as it was, but the options are what keep serious players flying.

Additionally the game outside of competitive tournament play is still as approachable as ever. You like Luke and Poe then fly them, have fun make pew pew noises when shooting. It's still easy to find people who play that way.

Rebooting a game like this always sucks, and the new version usually has plenty of its own issues.

I thought I FFG has done a great job managing the issues with game balance that come up. They did well with the changes to the phantom, and have done it agai by fixing the jumpmaster and reigning in wedge.

As you pointed out the game is loose enough that if you want to play only Force Awakens pilots or OT pilots the. You and your local group can do so.

Otherwise, if I turn up at a club or a friend's house, how do we agree a common point for what's ok and what's not for a casual game? And if we don't have that common ground, who decided to take more tournament grade combos is going to win before a dice gets rolled.

You're right that the exponential complexity won't affect people at either end of the spectrum. But there's a big fat stack of people in the middle form whom it's becoming a bummer to deal with. And I'm not sure we're not far off breaking point on some of the serious players either.

Malloc replied the topic: #236815 24 Oct 2016 14:37
Perhaps, but for me the complexity keeps it interesting I don't think that people who want to play for fun need to worry about being competitive, and this issue is really knowing what your opponent wants to do.

My experience at least here in the Nova area is that if you show up at a store an stat your play style or what you are looking to do that people will happily play a "for funzies" long list against you, or even help you build a competitive one.

Sure this game might be moving past the pick up and play stage (although I think you can still do that). But if you want that I'll point you to the flavor of the month light euro.

Vlad replied the topic: #236844 24 Oct 2016 19:11
So, my 6 year old son and I are just back from B&N, and he showed a lot of interest in X-Wing miniatures on the shelf, and then asked me if I thought he was ready. I just took one look at the back of the starter (cards, chits and stuff) set and said "no", but maybe I'm wrong here. He plays chess and Battle for Vedros and enjoys both. People with kids here, what do you think?

As for x-wing, I am definitely at the point of picking and choosing individual ships from rah wave rather than buying the whole wave(or multiples!) at once. Talonbane Cobra I'm looking at you. So imperial veterans yes, maybe that scum interceptor and that's probably it for this wave for me.
Read More...