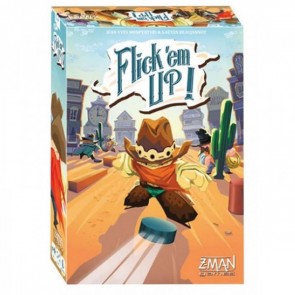 Game Name
Flick 'em Up!
Publisher
Z-Man Games
Designer
There Will Be Games

The hot sun burns in the sky like an incoming apocalypse. On the packed dirt below, two figures stand, ignoring the heat hammering down on their broad-brimmed hats. Sweaty hands hang down by holstered revolvers, eyes lock, mouths chew at nothing. For a long time, all is still in the hot haze. Then the Sheriff goes for his gun and his opponent reacts like a sprung trap. The guns level, fingers tighten on triggers, and both combatants are suddenly flattened by the collapsing town hall.

Welcome to Flick 'em Up, one of those games with a concept so cool you wonder why no-one has done it before. As the name suggests, it's a dexterity game. As the box art makes clear, it's set in the wild west. It's a marriage made in heaven: gaming could do with more of both. And this game does a fine job of fulfilling both briefs.

Mechanically it's straightforward, more so than the messy rulebook makes it seem. There are two teams of cowboys and each cowboy gets two actions. They can either be to move or shoot, both actions resolved by flicking. Knock over another cowboy with a shot and they take a wound and stay down, immune from harm until they stand up when it's their turn for an action. Most of the time you win by eliminating a certain number of enemy gunslingers before they do the same to you.

There are, though, many variations. The game is scenario-based. Each has its own setup and win conditions as well as slowly unfolding a simple narrative and increasing numbers of rules. There's a lot of imagination on display in the variety on offer. From a simple shoot-out, the game evolves through one on one duels to handling items through to innocent bystanders and hostages. By the time you're done, the game reveals itself as a detailed instrument, belying its simplistic start point.

Lots of the additions have lovely touches of design. My favourite is the Winchester rifle, represented by a big cardboard template which make your shot fly straight and true. On the other hand, each new rule or item suffers from the same obtuse explanation as the original rules. This isn't the sort of game one should take too seriously and it's usually easy to muddle through. But there are so many edge cases that it's still annoying, especially when it stops quickfire play while everyone decides how to proceed.

Two things stand out about the gameplay, each feeding off each other. First is the heavy use of scenery. There are barrels, boxes and cacti in the box, together with a spread of stand-up cardboard buildings. Most of this sees action in most of the scenarios. That makes set-up a pain but there's a real payoff in the play: cover becomes vital. Shooting your cowboys behind barriers where they can still take pot-shots at the enemy becomes vital. Scenarios play out as slow-motion tactical showreels. Participants struggle for cover and their foes try to outflank them while staying covered themselves. The rules penalize missed movement shots, making every step fraught with tension.

And this leads into the second standout aspect of Flick 'em Up, it's sense of atmosphere. Before I even set it up for the first time I'd made a playlist of Ennio Morricone music to game to. The physical nature of play gives the title an odd sense of realism, in spite of its goofy cartoon art.  Duels are a particular joy, where two players face off, taking turns to take shots and inching forward on a miss, the stakes growing higher with every flick. Bending over the table and squinting down your finger as you line up a shot, you can almost smell the cordite.

You can also cause absolute havoc to all the other stuff standing on the table. And this my biggest issue with the game: all that scenery makes for interesting play but it's too cramped for a dexterity title. As we got more involved, we found ourselves having to move buildings, scenery, even other cowboys almost every shot. And a significant amount of the time, we'd still knock something over trying to execute the move. Much like the rules conundrums, it's not a big deal in terms of fairness. It just interrupts the flow of what works best as a fast-paced game, as well as spoiling that peerless sense of engagement.

Unfortunately, the very things that make Flick 'em Up great also spoiled my enjoyment of it somewhat. There's just no having one without the other. And it stands out in a fairly unique place among dexterity games where what you choose to do with your flick matters as much as how well you take it. If shuffling scenery on every short is the price to pay for that, partner, I guess that's just the way things are. If you want to argue with me about it, I'll be under the town clock at noon, waiting with my revolver.

Vlad replied the topic: #242491 16 Jan 2017 13:17
Good review, Matt. I really liked this game at first (my son loves it), but it becomes very cumbersome for what it is. Like replacing the dude with a disc to move him, then putting the guy back - I wish it had a movement stick instead. And the scenery is problematic to say the least, specially when playing with kids. On the other hand, shooting wooden cowboys' hats off is deeply satisfying on so many levels.

Legomancer replied the topic: #242499 16 Jan 2017 15:30
This game was taught at one of the Trashfests and I ended up bailing and going to something else. It's just too fussy and cluttered for a fun flicking game.
Read More...