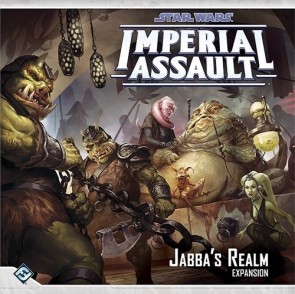 Let's start with an admission: Empire Strikes Back isn't my favourite Star Wars film. Return of the Jedi is. And my favourite scene in Return of the Jedi is the beginning, in Jabba's palace and on to the Pit of Carkoon. I like it because of all the things in Star Wars it's by far the most alien and esoteric of all and because it's full of huge, slobbering monsters. So getting hold of the Jabba's Realm expansion for Imperial Assault was like getting to play with my childhood Star Wars figures all over again.

Much of the important stuff is right there in the box. There's a tile for the Pit of Carkoon festooned with gleefully horrid Sarlacc art. There's a massive Rancor figure which doesn't fit together at all well without copious amounts of pressure and hot water. There are Gamorrean guards and sail barge tiles and all sorts of other scum and villany all tied together by a full length campaign. So it's got the same number of missions as the one in the original box.

There are omissions, too, as you've come to expect from Imperial Assault. Even the expansions benefit from expansions. The boxes's namesake, Jabba himself, is a separate purchase. You may also want the Imperial Captain Terro, who shows up in a lot of scenarios, as well as Jedi Luke and some Alliance Rangers, who show up less. There are cardboard tokens for you to use if you don't have the figures. Several well known characters like Bib Fortuna don't put in an appearance at all.

Instead we get a bunch of new Rebel characters for players to use in this, or any other, campaign. They're a cracking bunch, which do a fine job of filling in the small holes in the existing line of of heroes. We have a genuine tank, capable of soaking and healing massive damage. There's a Mandalorian Swiss army knife, fast and capable of building flexibly depending on your needs. Rounding up the trio is a Rodian gunslinger, laying down light but frequent fire even has he dashes round the board.

You'll get to play with these guys in a fun, full-length campaign that throws in some novel toys without breaking what makes the game fun. There are some cracking missions on offer. One sees the players joining in a hunt for a wild Rancor. There are several that use separate sail barge boards and let figures move between the barges and the landscape beneath.  Indeed they're good enough that it's almost a shame there's no option for a shorter, small-box length campaign. The commitment required will be offputting to some players.

The Imperial player gets two new classes including the bounty-focused Hutt Mercenaries. This lets the Imperial player gain bonuses against heroes on whom they've put a bounty. It's a thematic idea that increases the social elements of the game. And as you might expect, it's scum like bounty hunters that get a big boost in this big box. There's a slew of new figures for the mercenaries faction, making them a much more viable choice in skirmish.

One of the most interesting things about this range of expansions is how they evolve the skirmish game. There's even a 4-player skirmish scenario. Of particular note is the expanded range of command cards that anchor on figure traits. Indeed there are some that can be used with multiple traits for maximum flexibility. This is a great idea: previously, building a command deck felt like an annoying afterthought to your list. And certain cards came up time and time again. There's now a greater range of powerful cards, usable in a much greater range of situations. It's bought a lot of fun uncertainty back into command card play without breaking the game.

Alliance Rangers and Jabba serve distinctive roles, as a long ranger sniper unit and scum support respectively. But it's telling that one of the expansion figures, the Jedi version of Luke, is a re-implementation of an existing character. He doesn't even have a separate character card for skirmish. Anyone who wants to use Jedi Luke in a game can just stand in the Luke figure from the base set. So what's the deal here?

Aside from being a neat figure, the stats perhaps hint at it being a solution to the long-standing problem in skirmish of multiple cannon fodder troops working better than costly heroes. This version is more expensive. But he's got a lot of health and has the ability to deflect range attacks back at their source. It'll be interesting to see whether there will be more re-designs of existing iconic characters, aimed at making them better in skirmish. It'd be fun to see Lando in his Jabba's guard uniform, for instance, or even Leia as the bounty hunter Boushh.

If you want an expansion to Imperial Assault, it's hard to see how you could go wrong with this. It expands on every aspect of the game with great components and novel ideas. And even if you do think Empire Strikes Back is the best film, it's hard to ignore how iconic Jabba has become. The question is: do you really need another full-length expansion? My only wish is that it was easier to get this material into shorter doses.

Egg Shen replied the topic: #244584 27 Feb 2017 09:52
Good stuff Matt. Like you I'll always have a special place in my heart for the opening of Jedi. There were so many weird monsters and creatures that left a lasting impression on my younger self.

But the 1v1 tactical game play: how has that evolved during the course of these releases? Does it make getting into the breadth of the expansions worth it if one doesn't want to play Star Wars descent?

This is the #1 problem with Imperial Assault, and it is in fact the reason why I parted ways with it. Focusing so hard on the campaign game was a big mistake. The thing is, the campaigns are ultimately, like most board game campaigns, really shallow and really just wind up being about what avalanche of text-laden cards you get to keep the next time you play moreso than advancing a plotline or a story. When this expansion came out, I asked my two buddies that I played through the rest of the IA stuff with if they wanted to do a new full size campaign and neither were really interested despite this being a cool-looking addition. I was relieved, because I really didn't want the commitment of it all. Ultimately, it's not worth it. It is, after all, Star Wars Descent.

I have no idea why FFG hasn't put out a scenario book or something for one-off adventures, but it really is tooled right down to the text on the cards for campaign play. If you don't like that or your group doesn't get on board with it...you can give this game a hard pass right out of the gate. The small expansions were a step in the right direction because the campaigns were more manageable. Much was made that you could play hour-long sessions of this, but when you are looking at playing 15 hour-long sessions on tiny maps where you are trying to flip switches or pick up tokens...

Colorcrayons, the skirmish game is decent but it's just kind of not really worth it if tat is what you are looking for. There are far more compelling options for this kind of thing, the only thing really going for it is Star Wars. It's pretty fun, if you have people to play with that are into building teams and decks and all of that. But here again, my gang wasn't really feeling that so it floundered. I would much rather play DOOM, TMNT or any number of options out there- much better games, and much easier to get to the good stuff.

The only saving grace may be the solo app, but I just can't be bothered with it at this point. I'm sure it's as good as Descent.

Melted all my IA collection down into sweet, sweet polystyrene sprues from Nottingham.

Michael Barnes wrote: Colorcrayons, the skirmish game is decent but it's just kind of not really worth it if tat is what you are looking for. There are far more compelling options for this kind of thing, the only thing really going for it is Star Wars.

That's the only point on which I can disagree. Everything you said about the campaign game is spot on. It's worth it once, especially if you've got access to a shorter small box campaign, but not more.

Skirmish though is great fun. There are indeed more compelling options for grid-based tactical combat games but not all that many and the Star Wars theme is great. Some of the skirmish maps are excellent. I printed some favourites out onto two sheets of A3 (that's 11.7 x 16.5 inches for you US folk), taped them together and then use them under plexiglass. All the fun and none of the hassle.

I've also found Skirmish doesn't benefit all that much from a regular opponent to build lists against, like X-Wing and Armada do. Without the huge slew of upgrades and options those games have, lA lists tend to be better balanced. So you can just pull two lists of favourite characters together, take them over to a friend's house and spend a couple of hours replaying the best scenes from the films.

Msample replied the topic: #244641 28 Feb 2017 09:34
I agree with Barnes that IA character , as opposed to Skirmish could use some stand alone scenarios with force pools, builds, etc already determined. My usual opponent can be agonizingly slow in building out a force, or doing the character maintenance stuff between missions in IA. Sometimes you just want to just play a mission ( as opposed to Skirmish ) and get right into it. Sure, you could go online and look at what people post. But shit, put it in a booklet and people would buy that. Make it print on demand perhaps. I mean, put out a map and character builds for Jabba's Palace when Luke enters , or the fight over the Saarlac pit. This also allows people to use canon characters like Luke, Han etc that normally don't get used a lot. X-Wing and Armada, esp with the sheer volume of stuff out there now, screams out for some pre built scenarios.
Read More...