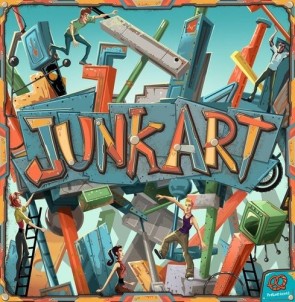 Stacking games look very striking, and they hold out the invite of universal appeal. "Come play me," they whisper, enticingly while waving their alluring wooden pieces around. The various incarnations of Bausack have been popular, because they shoehorn a bit of strategy in too. But there's a problem: when your core concept is balancing awkward shapes atop one another, there's limited room for variety. Play one and you've kind of played them all.

So Junk Art takes a different approach. It tries to be them all, all at once and all in one box.

Slide off the lid and the usual array of oddly-shaped painted wooden bits will be there to greet you. There's also a deck of cards, each of which represents one of the bits in the box. Atop these is a smaller deck of location cards, and that's where the magic is.

Each location card is essentially a different set of rules for the pieces. You'll play three during one game. Go to Philadelphia and you get a hand of cards, keep one and pass the rest, and then everyone has to build with the pieces of their cards. Go to Monaco and each player gets ten cards, and then they race to be first to stack them all. Go to Paris and now everyone has to co-operate to build a single structure.

There are twelve of these locations in the game, and those are the three it recommends you start with. One of them is only playable if you also own a copy of Flick 'em Up, creating a freakish but fun hybrid where players try to shoot bits of each other's structures. There are also three blank cards for you to create your own. 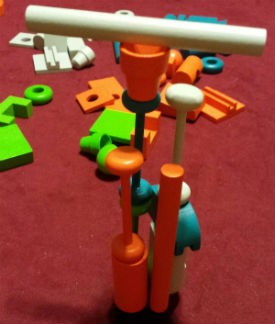 Normally, I figure the job of a review is partly to prevent people reading rule books. Here, though, I'm going to make an exception because the rules have all the locations in them, and many are brilliant. There's card-drafting and seat-swapping and colour-matching in various combinations. There's even one location where you use the cards to play a trick-taking game with the winner of each hand determining which pieces go to which player.

It's a smorgasbord of joy. The variety should offer something for everyone. I'm particularly fond of Montreal where you add three pieces and then move seats. It encourages the deliberate building of unstable structures, something you'd never normally do in this kind of game. And throws a hefty amount of screw-you glee into the mix.

As you might imagine, there are already a number of ideas floating around the internet as to what to do with those blank cards. They're instructive, because they show what a creative toolbox Junk Art actually is. There are suggestions to get players to build the widest structure instead of the tallest. An idea for a San Francisco variant where structures have to survive the earthquake of a bang on the table. Even one that uses the perforated pieces to award points based on how many colours you can seen through each hole.

The more of this we played, the more we started to see how the odd shapes could fit together in new, interesting ways. We began to build taller and taller structures that could totter without collapsing. It became apparant that a lot of thought had gone in to choosing those shapes. Stacking games aren't a big thing for me, as you might have guessed from the opening paragraph. So what I just said might be true for most games like this: I don't know. But it works here.

Stacking games tend to foster the same kind of pleasures. The tension of wobbling pieces on one another. The satisfying rattle of a collapsing tower. And here, like the best stacking games, there's added strategy and variety too. The game is short, simple and makes people laugh. It's a great family game though not so much for parties, as there's a six player limit.

Reviewing this is part of my series on innovative games. And there's no denying Junk Art adds a clever twist to the stacking genre. Fundamentally, though, I'm unsure how novel it is: the creativity is partly shunted off on to the players. It's still trapped in the same cage as its peers: whatever you add, it's all about stacking. This one, though, can be whatever you want inside that cage. Even if you're a big Bausack fan it's easy to imagine a Junk Art variant with similar bidding rules. And that makes Junk Art the one stacking game to rule them all.

OldHippy replied the topic: #248007 08 May 2017 19:15
This looks awesome. Thanks for the review Matt. Personally, unlike you, I love stacking games. However we do have Sac Noir (basically a deluxe Bausack) at home and have added rules and pieces to it from various places. There are at least 6 different games that came in the bag (no box for that version just a giant bag full of stuff) not counting the variants we've made.. including a bidding version (including 'reverse bidding'), competitive, collective, etc... so while this sounds hugely tempting I'm only seeing one or two small new things that I think I could add to our game (switching seats sounds awesome and mixing it with Flick 'em Up sounds cool too) reasonably easily. For that reason alone this review was very useful for me. Chances are I won't buy it, but I'll add some new variant ideas to my existing game.

JonJacob wrote: However we do have Sac Noir (basically a deluxe Bausack) at home and have added rules and pieces to it from various places.

Yeah, this is kind of what I was driving it in the review saying that stacking games are all basically the same, and that creativity is in the hands of the player. All of them are an open invitation to variants: it's just that Junk Art makes that more explicit and more flexible than most others.
Read More...