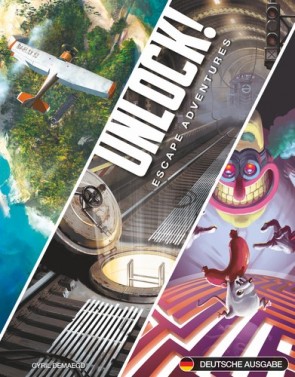 Escape the Room is such a popular game concept that it's spilled over into almost every genre. You can escape rooms on computer, in a role-playing setting, even in real life. But it's never made much impact on the board game scene for a simple reason: it's mix of mystery and puzzling doesn't fit the format well.

Co-operative card game Unlock aims to change that, with the help of a few decks of cards and a mobile app. And it manages to cram in an impressive amount of novel design ideas while doing so.

Rules-wise, it's very simple. An adventure consists of a deck of cards, each of which has a number or letter on the back. The room you start in will instruct players to find certain cards in the deck corresponding to things in the room. A coat on a hook, for example, or a poster on the wall.

Most cards are blue or red and have a number on them. Solving a puzzle means adding the numbers from a blue and red together and finding the corresponding card in the deck to see the result. Get a wrong combination and you'll lose 3 minutes from the hour you have to complete all the puzzles and escape. The app keeps the timer and, now and again, demands you enter codes or plays multimedia samples at you.

Initial puzzles are straightforward: combine a blue key card with a red door card, for example, to get to the next location card. However, by far the best thing about unlock is the creativity on display in crafting puzzles. Sometimes you'll only have the blue or red half of a pair. Finding the other can take some fiendish deduction. Some cards have numbers hidden in the artwork. Others require you to count things, spot omissions, undertake spatial rearrangements and all sorts.

We can't go into detail without spoilers, of course, so you'll just have to trust me. Some of the ways the game works with paper and the odd sound file are breathtaking. Some of them would be difficult to replicate in digital form, because they rely on players having lots of cards at their fingertips at once. Many are the sorts of puzzles that will make everyone groan in appreciation when they're finally cracked.

However, this is also where the cracks in the game start to show. Just like the most nefarious text adventure games, if you're stuck on a puzzle, you're stuck.  The app has a hints system which you can use if you want to risk dropping your score, but some of the hints are awful. One we couldn't understand even after we'd solved the puzzle in question. Otherwise, it's game over, there's no way to progress. And these games are difficult: of the three included, we only managed to solve one within the time limit and one we couldn't finish at all.

At that point, you'll want to pack the cards up and try again another day. Maybe when minds are clearer, or you have a different player at the table. But you can't: this is a one-way trip. The puzzles are set in stone, so once you've solved them, you'll know the answer. If you get stuck it is literally game over, never to play again. And, of course, this means there's zero replay value to any of the three adventures in the box.

Against these harsh criticisms you must weight that Unlock is a genuinely unique experience. It's an emotional and intellectual rollercoaster as you smack into each riddle, turn it over, solve it only to find another. Unlike almost ever other co-operative game it fosters genuine co-operation among the players. The ticking time limit and threat of penalties keeps it tense and thrilling. One of the people I played it with opined it was the best game she'd ever played. After the first session, when it became clear replay was impossible, she was hugely disappointed, but she didn't change her opinion.

Unlock is so different from any other game I've played that it's hard to assess. In terms of innovation, it's an unqualified success. It's not the first escape the room board game, but it's one of the cleverest. However, it's questionable how much value this innovation represents. People who want to solve puzzles with friends have been collaborating on text or point and click adventures since the dawn of computer games. Unlock offer a slightly different experience, for sure. But with its dead-ends, weak hints and lack of replay, it's hard to know how wide an appeal this brave new world might have.

May 02, 2019
Rating
2.0
Unlock! Escape Adventures
I have no idea how to rate this. As an experience, it's novel, and quite brilliant. But like all escape the room puzzle games,. it's possible to get stuck and not be able to progress. And each adventure can only ever be played once. A fun, unique board game with zero replay value? Up to you how you feel about that.
MT
Matt Thrower #1 Reviewer 286 reviews