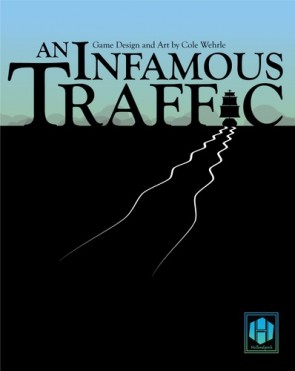 Historical wargames are often a terrible waste. All that wealth of history, all over the world - political, social and economic - and games choose to focus on violence. Such a shame, especially when turning history into a game is such a great way to get inside it, to learn it and understand it. Now the case for the prosecution has a new exhibit to showcase all these points: An Infamous Traffic.

It's a game about the British opium trade in China. What drew me in was the premise, the example of a non-military historical game. And it was quite a journey back in time. But it almost broke me, and made me want to return to the present, twice.

First time was breaking open the box. I guess I should have been prepared for a paper map in a historical game. To find a small one, printed in two pieces for maximum inconvenience, was still a major disappointment. And the rules, although short and full of design insight, are terrible. After one pass through the book, I would have given up had I not had the game to review. Thankfully, other people have climbed this hill before. With the help of a video from Heavy Cardboard and this great player aid, I got it to the table.

Once you've found a way in to the mechanics, it's clear why it must have been a hard rulebook to write. An Infamous Traffic is one of those circular games where everything impacts everything else. The goal is to generate income by completing supply chains in China. To get opium inland you need opium itself, plus either fleets or local smugglers to ship it, and merchants or local bureaucrats to sell it. With all the pieces in place, if there's local demand, everyone who contributed to the chain profits.

Buying a counter and placing it are separate actions, and players only get one action at a time. So getting all these things in place takes time, and no-one is going to get a monopoly. Indeed early on, with little in the bank, players can do well by co-operating to get a chain in place so they can all make money.

Yet there's a lurking temptation at each and every step. When you add something like opium or a merchant to a chain, you set its value. That's how much income it'll make you when the chain completes. However, you can also undersell players: choose opium or a merchant of a lower value, and replace that link in the chain with your own. This introduces a delicious seed of paranoia into proceedings right from the beginning. As players make profit, and the need for co-operation reduces, that seed matures into a beautiful, reeking bloom.

If you find yourself cut out of the co-operation, the other action, aside from taking and placing resources, is conspiracy. This involves grabbing a few face down counters and seeing what's there. You might get smugglers and bureaucrats which you can add to supply chains, including via underselling. You can get English influence, which means you get to make decisions should an opium war break out, or Chinese police which can put an end to smugglers. Or you might get a missionary, which can open up new trade routes for opium.

Should that last statement have made you pause, you're not alone. I had to look it up. And missionaries did indeed help spread the opium trade, in the hope they'd make converts along the way. Yet that's just the beginning of the cynicism in the game. While supply chains will increase your income, it's not income that wins you the game. You get that by spending income on hidden prizes which increase your families' social standing in London. Fancy hats, trophy wives and nobles titles: for these baubles you are breaking the social and economic fabric of a country.

This was the second point at which I almost walked away. I wasn't sure if I could stomach a game that rubbed my nose so closely in the brutal colonial legacy of my country. But this is all good history, and it's history I needed to learn. We have enough games about the building of empires. We could do with more, like this one, about the everyday impact of empire building.

Such pointed social commentary would be a waste if this was a poor game. A necessary lesson that no-one would ever want to hear. Fortunate, then that this is an excellent game. Aside from the heavy economics and creeping paranoia, An Infamous Traffic does a bang up job of blending disparate bedfellows. Table-talk, backstabbing and dice don't tend to go well with heavy economic games. Yet each mechanic here is finely tuned to slot in alongside the others. When you fail, it's almost always because you screwed up. When you get locked out by other players conspiring, there's almost always a way back in.

In the notes, the designer references several other games as inspiring this design. The only one that felt familiar was Brass, where you can see the first inkling of supply chains. As a creativity quest review, it gets a pass: An Infamous Traffic builds something new from the best fragments of previous games. Better, though, is that it joins that tiny pool of games that succeed in being both mechanically and socially demanding. Given the potential this one has, I do wish it was printed on harder-wearing components, though.

This game has been on my radar for a while, because the theme (and built-in cynicism) is right in my area of interest. I hadn't decided if I was going to cough up for what was almost certainly going to be a shelf toad.

However, I think I will. This looks like the sort that's going to disappear forever.

I purchased this Print 'n Play from WargameVault for a song. It's easy to build, a great first PnP for those who haven't done it before. From the sounds of it my copy may be nicer than yours. I'd recommend buying it there either way, as this is a game that could disappear quickly, so having a copy on your hard drive could be valuable.

And the result is a socially relevant game that really calls out the subject matter. As a player you're a complete dick preying on poor people, while you're knifing your fellow players. It's an education in the darker side of man, made all the more poignant, because it's true. You can't shake this one off by pretending it's fiction.

And you're right -- you invariably pay for even minor errors. This game does not coddle you. Your opponents will make plenty too, so game is on.

Thank your for reviewing these deeper titles.
Read More...