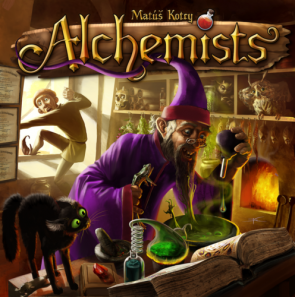 As a worker placement game, I didn't have much hope for the engaging theme of Alchemists. All the rich, wacky art, plastic potion bottles and player screens in the world couldn't make up for the thematic drag of worker placement. At least, so I assumed. Turns out that I was very wrong.

Each turn, players place their cubes across various action spaces which are then resolved in strict order. The key ones at the start of the game are gathering alchemical ingredients, selling them for gold and using them to brew potions. This latter action can then tested either on a student or yourself. Some potions have bad effects: the first time on a turn that the student drinks one, he demands gold to test any more. Testing on yourself is always free, but then you suffer the deleterious effects like losing a worker cube.

Mixing potions from pairs of ingredients is one half of what makes Alchemists special. There are eight ingredients and the game uses a mobile app to assign each one a set of effects. By combining two and seeing what kind of potion comes out you can deduce some of these effects for those ingredients. They're abstract - one of three colours, either negative or positive - but that doesn't detract from the appeal of scholarship. Working stuff out from the scraps of information is a wonderful little puzzle and feels like real research.

Because apps are bright and shiny and because this kind of deduction is a rarity in game design, it's where a lot of players focus in Alchemists. But it's a distraction. The second plank, and the real triumph of the game, is how it goes beyond mere research and into academia. This combination is pretty much unique, in my experience, and wins the game deserved plaudits for innovation.

See, you're under pressure to publish theories about the effects of the various ingredients. When you do so, you can make a hidden "bid" about how sure you are. Publishing early wins you gold and victory points, regardless of whether you're right or not. Later, players can challenge your theories if they think you're wrong. And the game end will reveal all the correct answers. If you are wrong, you may lose points depending on how heavily you backed your publication. If you're right, though, you'll gain points instead.

These two aspects of the game are what earn it its thematic stripes. It is a quite extraordinary and wonderful replication of the process of research and publication. Not to mention an accurate and damning satire of modern academic practice. Publishing often and early isn't the only path to victory, but it's a key part of any win. And challenging other people's theories is almost as important, if only to allow you to publish your own, superior ideas.

Given that you're under pressure to publish and with limited resources, most players will have to use guesswork in early theories. As with all guesses, it's better to make educated ones where possible. So if someone else has made a theory for an ingredient you know a little bit about, you can use that to supplement your information. Unless they're wrong, of course. Or unless they're downright lying on purpose, risking victory points to mislead everyone else.

In most games, this kind of shady dealing would be a cause for celebration. Alchemists, however, is a mechanically intricate and deep game. It takes a good while to learn and it punishes strategic mistakes severely. There's no rubber band to save players who make bad choices. That, in itself, is also no black mark against a game. The problem comes from having both approaches in the same title. When you've worked for information, yet still have to guess, it's hugely frustrating to lose points. Worse when you then watch someone make a complete leap in the dark and get rewarded.

This dichotomy permeates the whole design. You're encouraged to think hard and plan hard to make the most of your action cubes and resources. The actions get resolved in strict order: you gather ingredients, sell stuff, buy artifacts, do your academia and then test potions. Often, you're relying on the results of an earlier action to support a later one. If you put an action cube in the shop, hoping to buy an item, you'll need enough gold for it or you'll have wasted that precious, precious cube.

However, the biggest source of income - selling potions - is also the biggest crapshoot. You need to have the right ingredients to make the desired potions, which you may not get in the gathering round. If you do, and more than one person wants to sell, there's then a bidding war, making the amount of income uncertain. Lose that and it's possible you may get frozen out of the sale entirely. That may then waste multiple cubes: two on the sell potion space, and any on subsequent spaces that you needed money to support. And again, it's possible for a player to luck out here and create a valuable potion by accident.

The strategic and deductive aspects of the game are, individually, brilliant. But the tragedy of Alchemists is that they shoot each other in the foot at almost every step of play. Yet every time I've played this and walked away annoyed by its contradictory elements, it's stayed in my thoughts. Partly that's because it's easy to identify areas where your strategy went wrong and you want to try again, even if the guesswork interferes. Partly it's down to the deduction element, which is interesting and unique. But mostly it's the theme. Years of conditioning have taught us that only combat and adventure games can have theme: Alchemists demonstrates that even the most European of games can tell a gripping story, given enough rules.

May 02, 2019
Rating
2.0
Alchemists
There's a lot to like about this game. The way it builds alchemy as a satire on academia is simply fantastic. But it has way too many rules and a nasty case of encouraging analysis before stabbing you with RNG.
MT
Matt Thrower #1 Reviewer 286 reviews

Jexik replied the topic: #250677 30 Jun 2017 10:57
The barrier to entry "Wait, we have to download an app first?" and setup "Do we really need all of these cardboard bits?" are enormous with this one, but it's definitely different. But I really wouldn't take anything out of this design. Once you get into it, there really aren't that many moving parts- collect ingredients, get a little money, deduce, publish. There are a lot of people out there that would hate it, but they probably won't even be asked to play it in the first place. Games like this are very self-selected.

I've got a few friends who just love it!

Gary Sax wrote: How does this play with different numbers of players?

It's okay with 2 but better with more. It's been carefully designed to scale well: you use a slightly different setup, even a different board side for each player count.

One of my friends that has it plays it most frequently with his spouse, who's not the biggest gamer but really wanted to learn Alchemists based on the theme.

(FWIW, the friend above is Matt Loomis who is an aspiring game designer who really didn't like worker placement games until the last couple years. The other is Ben Rosset, who designed Brew Crafters, another WP game- Ben said that he and his group were playing Alchemists obsessively).
Read More...