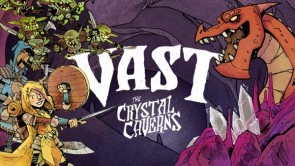 Dungeon crawling is the most overworked, over-produced genre in all board gaming. Even more so than impressive Renaissance nobles. It was a surprise, then, to find  one mentioned over and over when I cast about for the most innovative games around. What  could Vast: The Crystal Caverns possibly  do to revitalise the most moribund group of games at all? The answer came as quite a shock, because it's not only new for dungeon games but  for board games in general.

Vast essentially  makes each player play by a different game by their own set of rules. These  sessions overlap at multiple  points, generating lots of player interaction and creating the game as a whole. There's  a knight, who hunts for treasure and gains levels like a classic RPG character, and she wants to kill a dragon. The dragon, meanwhile, is trying  to evade the knight, eat goblins and hoard treasures. The goblins are, of course, a third faction and they want to kill the knight. There's a thief who just wants to plunder everyone's treasure. And finally the cave itself is a player who builds the map, places resources and wins by stretching the game out until it can collapse and kill everyone.

This diversity makes the game very hard to understand at first. None of the roles have particularly complex rules: none are longer than two pages. But the book gives  no great sense of how each set of rules works together to build the whole game experience. And it makes it an absolute pain to teach, since each player has to learn a different set of rules. There are helpful hint sheets to hand out which take out much of  the legwork. But still, I had to watch videos of other people playing before I could get make head or tail of what was going on.

By the end of a single session, though, you'll all have got to grips with it. And what emerges is as fresh and exciting as a newly-hatched dragon. And also just  as liable to bite your hand off if you mistreat it.

Most of the game is quite strategic. There's card draw, but the decks are small so you can learn what's likely to come up. There's a neat dice which selects squares around a target for area effect stuff. There is, in short, enough chaos to keep people guessing while still leaving them able to plan. Some roles are more strategic than others. The knight, for example, has a deck of side-quests which earn her extra experience and occasionally rolls the dice. The goblins, by contrast, have multiple decks of cards and rely on the dice to avoid ending up as dragon snacks. So players can choose a role suited to their tolerance of chaos.

Against this, there is a certain sense of similarity in each game. Vast is very much a game of checks and balances. The choices each role makes only has a limited impact on each of the others. So whenever one starts to near their victory conditions, the rest need to stop squabbling and peg them back. If the Knight is in the ascendant then the Cave can send down rockfalls to block their path to the Dragon and the Goblins need to get aggressive. This in turn, means they're both playing sub-optimally which benefits the Dragon. And so it goes on in fits and starts until one player manages to find a way out of the cycle to win.

Catch the leader can be a fun test in itself, but it's not enough to sustain a game. What saves Vast is the complex interweaving of its social and strategic levers. You may have to help prevent a winner but, when doing so, your challenge is to eke out the tiny differences that leave you in a better position than your peers. With so many different mechanics at play, it's a fascinating challenge, all the more so when you add in the element of table talk.

Between all this, the various roles weave a classic tale of dungeon delving. The map is unknown and takes shape as the players move and explore. The knight can find and equip magic items when she opens chests. The goblin tribes can recruit a variety of horrid monsters and has a hand of nefarious secret deeds. The cave player chooses from a selection of events when the knight stumbles on to an appropriate tile. If you tire of the relatively generic dungeon tiles there's even a terrain variant to make it more like a living, breathing underdark. There's not a ton of variety in the cards, so the narratives it tells tend to end up sounding similar. But there's enough to please those who want some story along with their strategy.

Vast does have minor downtime problems, and the way the roles interlock demand additional rules when playing with less than four. But these are not burdensome: even the solo game is quite fun. It even comes with a slew of variants and difficulty options for when you've got to grips with it. However, as is often the case with highly unusual games like this, the quirks are a result of its quirkiness. Vast is a fascinating experience, both as a design experiment and a finished game.

May 29, 2018
Rating
3.0
Vast: The Crystal Cavers
A very peculiar and very creative game that's fun to play and hard to teach: all the players use different rules and the game somehow falls out of the points where they intersect.
MT
Matt Thrower #1 Reviewer 286 reviews

hotseatgames replied the topic: #251055 10 Jul 2017 08:03
Nice review! Does the game feel at all euro? When you win or lose, does it feel like it was because of something over which you had control?

Also, how long do you think it would take experienced people to play?

hotseatgames wrote: Nice review! Does the game feel at all euro? When you win or lose, does it feel like it was because of something over which you had control?

Also, how long do you think it would take experienced people to play?

Glad you enjoyed it: can't have done the best job, though, if there's questions to be asked.

It's a good mix of Euro and thematic sensibilities. Winning is often a matter of manipulating both the social and strategic aspects to "steal" a victory out of other players trying to peg you back.

Play time is enormously variable, depending on how many players and which roles you're using. Finger in the wind estimate is 30 minutes per player.

Legomancer replied the topic: #251059 10 Jul 2017 09:01
The different rules not only make it hard to teach, they make it hard to play. You have to emphasize that you also need to know everyone else's rules. In our game of it, no one except the Cavern player really understood how the Cavern player worked, so we were unprepared to prevent an easy victory for him. And it didn't seem like enough of us were impressed by it enough to then try again. It felt like a game designer's game, where the idea behind it is very clever but the gameplay itself was just confusing and kind of flat. We should probably give it another spin but the guy who has it hasn't been to the group in a while and no one's really been clamoring for it.

I think there's elements of this game that are downright innovative, but after a few plays I came down somewhat harsh on it. It's difficult to teach every single damn time, people don't understand their roles and even when they have a solid grasp, if they switch roles next game they basically need to re-learn it. It's such a simple game that wants to move along quickly but it has accessibility problems oozing out every crevice in that cave.

charlest wrote: It's such a simple game that wants to move along quickly but it has accessibility problems oozing out every crevice in that cave.

Yeah, I had read all this before I went in, and I did find it very hard to learn myself. I had to watch videos of other people playing to understand it. Once I got the concept, though, I found it far less problematic than I expected. I taught it and played it with two groups, both of which had the swing of the entire game before the end of a single session and both of which wanted to play again.

It may be that I just got lucky. The reference sheets were key because they let you explain only a brief overview of each player's role and then they can read the details for themselves. And the downtime actually helps in this regard because it gives everyone space to read their sheets and to watch and understand what each player in turn is doing.

Gary Sax replied the topic: #251063 10 Jul 2017 09:57
Another casualty of the fact that people play their games once or twice with the same people. Then if it doesn't immediately stick, on to play something else.

Gary Sax wrote: Another casualty of the fact that people play their games once or twice with the same people. Then if it doesn't immediately stick, on to play something else.

I have a lot of games I love and enjoy playing, and if something isn't fun right out the gate I have no problem tossing it aside. Maybe I'll miss out on the greatest game of this generation but that's okay.

Gregarius replied the topic: #251069 10 Jul 2017 14:20
Coincidentally, I played this for the first time over the weekend. I was the only new player, but it still took us an exceedingly long time (because the others insisted on playing new roles, despite my pleas). I lost as the Cavern, due to not grasping the best strategy until too late combined with poor Omen draws. The Dragon won due to a cautious Knight and impotent Goblins. I tried to help the Knight on a few occasions, but I had to be careful not to help too much or I'd just hand him the victory instead of the Dragon. That aspect I liked; the rest, not so much. As Charles said, everyone needs to know 1) how their rules work, 2) what their best strategy is, and 3) the same things for everyone else.

charlest replied the topic: #251071 10 Jul 2017 14:37
Yeah, I've noticed the biggest issues with the Goblins. People always get tripped up on how they work. I think the rules references fail because you really need part of the information out of the rulebook and part from your reference sheet. This doesn't work too well in practice.

hotseatgames replied the topic: #251072 10 Jul 2017 15:28
At Origins they were showing off a stand-alone expansion, something something Manor. I was going to try it out but never got around to it.
Read More...