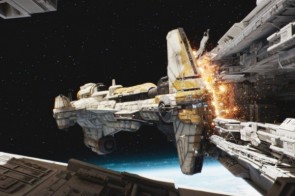 All through the colossal space battle at the end of Rogue One, I found it hard to concentrate. Seeing all those huge ships, the swarms of fighters, the epic scale, my brain kept turning back to Star Wars: Armada. That was especially true for the moment the Hammerhead Corvette came on the screen. I knew there was a new model for it coming for the game. And once the scene played out, I knew I had to have it.

The trouble is, it isn't an it, but a them. It comes in a two-pack whether you want two or not. Flimsy justifications for this abound. Some say it's good value because no-one buys a single small ship. Some say it's because there's a team based upgrade card in the box. I don't buy either: I'd rather buy just one Hammerhead. Especially when the most exciting thing about it, the ability to ram other ships, revolves around a single title card.

That said, they're pretty neat ships. It's easy to write them off as overworked versions of the CR-90 but the builds on offer have their own niches to fulfill. They make cracking missile boats, for one thing, or cheap-yet-useful activation sponges for another. The big draw, though, is that ram title card Garel's Honor and its companion upgrade Boarding Engineers. Essentially, both make it easy to deal face-up damage to rammed targets. Not game breaking - and not what happens in Rogue One - but the thematic satisfaction of pulling it off is irresistible.

It's Imperial adversary in the latest wave is the Light Carrier. As gray in name as it is in color, it nevertheless adds a new dimension to lists thanks to its squadron value of 4 and a red anti-squadron dice. There's also an upgrade, Disposable Capacitors, which lets you use blue anti-squadron dice at long range. In theory, this makes it a superb centerpiece for squadron-heavy lists. In practice, at 54/61 points and two defence tokens, it feels both too fragile and too expensive. That said, the mere fact it exists may prove a boon to the game as a whole. Cheesy flotilla lists are becoming a real pain in the backside, and the Light Carrier has the capacity to tear them apart. Just the threat of facing one is likely to help keep players honest.

To confuse Imperial players, the previous wave contained a Light Cruiser, which I am already mixing up with the Light Carrier. It is, however, a very different ship. At first glance it looks like an enfeebled version of the Gladiator, since it's another attack ship in the same price bracket. The draw of the Light Cruiser, though, is that it has two things pretty much unique in the imperial fleet. First, it's very maneuverable. Second, it has a bigger broadside than frontal dice. The good news is that means it opens up a bunch of new options for Imperial players. The bad news is that it doesn't synergise that well with other Imperial ships. These are worth running, but if you do, you'll likely want more than one. Perhaps it's these that should come two to a box rather than the Hammerhead.

The other big ship in that wave is Phoenix Home for the Rebels. It sounds and looks odd, an unfortunate misstep in the visual coherence of the Star Wars universe, but a colourful and striking one for all that. Is it any good on the tabletop, though? Well, FFG doubled the chance of it being so by making the two ship cards in the game quite distinct. One is an assault boat with a missile upgrade and black dice: it's slow, but punchy by Rebel standards. The other is an impressively multi-faceted support vessel. It's got squadron three, plus some long-range firepower and some useful upgrade slots.

One of those slots is for Fleet Support, a card category that's new in this expansion. As the name suggests, they have effects which apply across the entire fleet. This gives them the potential to be extremely powerful. The craziest one in the box lets you spend the card - or an engineering command token - to have every ship recover a shield. That's not game breaking, but its utility is large and obvious. There are a bunch of other good upgrades here, too, including solid commanders, officers and the Phoenix Home title. This feels a must-have for a lot of Rebel lists.

Wave 5 also includes a new box of fighter models for each side. As with previous fighter expansions the problem is that you only get two of each type, which limits their effectiveness, although the Imperial pack looks to have a better selection than the Rebel one. The most interesting thing in each pack by far is the Lambda Shuttle for the Imperials and the VCX-100 (the Ghost from Star Wars Rebels) for the Rebel player. They're similar in that each has the same pair of abilities. Relay lets you activate nearby squadrons why a big ship spends a fleet command and Strategic lets you move objective markers. This latter ability in particular has the potential to be vicious in combination with well chosen objectives and supporting fleet builds.

This is important. While X-Wing is drowning in the upgrade options available for all but the most dedicated players, Armada's biggest issue is cookie-cutter lists. It's become a game where a given list archetype is almost guaranteed to beat certain other archetypes and lose to yet others before a single dice is rolled. Think Admiral Ackbar versus the Rhymerball for example. Strategic has helped to shake this up a bit as, surprisingly, have some of the aces in the wave 5 squadron packs. Armada doesn't have the fastest release schedule, so here's hoping it takes a long time before things settle down.

Bojack wrote: "Wave 5 and 6" aka "milking nerds who don't know better". Its like stealing lunch money from retarded kids

Of course it is. Nothing to do with fans wanting interesting strategic options for a fun game.

I'm glad I don't follow the meta. Sounds kind of soul crushing. I get why others are into it, but...

panzerattack replied the topic: #253668 04 Sep 2017 09:38
Have you played the Corellian Campaign Matt? We're just about to start a campaign and I was wondering if you had any thoughts to share on it?

panzerattack wrote: Have you played the Corellian Campaign Matt? We're just about to start a campaign and I was wondering if you had any thoughts to share on it?

I haven't played it, no. I was really keen when it was first announced, but the final product is fairly different from the original concept. When initial feedback suggested that - like most campaign setups - it had a bad strong get stronger problem, I lost interest. That's absolutely the last thing you want if you're going to invest the time and effort in a long term series of games.

IIRC, Malloc posted about it on FB and liked it, but he didn't say much about if it was balanced over many games.

panzerattack wrote: Have you played the Corellian Campaign Matt? We're just about to start a campaign and I was wondering if you had any thoughts to share on it?

I haven't played it, no. I was really keen when it was first announced, but the final product is fairly different from the original concept. When initial feedback suggested that - like most campaign setups - it had a bad strong get stronger problem, I lost interest. That's absolutely the last thing you want if you're going to invest the time and effort in a long term series of games.

So, I have an idea that I suspect you might like: Either use the Rebellion board or make some tiles with PrintPlayGames and randomize planets and use cubes or whatever to create and track your campaigns. I did that for years with my Post Apoc campaigns using Mighty Empires tiles, and it's fantastic. The only issue is keeping it persistent since it can take up space.

Maybe have HotSeat make an app for you?
Read More...