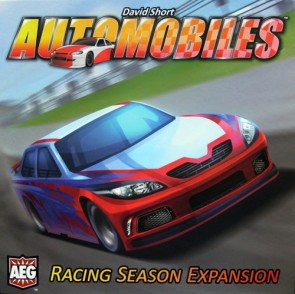 The best expansions don't just improve or fix their base games, they let you see them in a new light. That's what I was hoping from the racing seasons in this Racing Season expansion for Automobiles. Its parent title has been my sleeper hit for the past two years. While other games have peaked and gone, Automobiles is still lapping round for regular plays. It might not need the fresh coat of an expansion, but some go-faster stripes would be nice.

There's something very beguiling about season-based games. The idea of taking your carefully built bag from race to race, tweaking and improving for each new challenge, is appealing. In reality, these things often fall over due to the ugly twins of time and catch the leader. There's little more dispiriting than sinking hours and hours into a season, only to see an early leader streak further and further ahead.

Games of Automobiles take about an hour, and with seasons lasting 3-5 games, time isn't so much of an issue. It has two restraints to stop winners getting too far in front. The first is simple, a points matrix that makes it difficult to gain an insurmountable lead. The second is the allocation of sponsors. These are cards you choose between races that let you tinker with your bag before the next one. Winners get to pick first, but get a less powerful effect.

Bag changes are essential between races. But the sponsors on offer are a weak selection. They mostly allow you to remove cubes from your bag and the cubes that get removed are mostly waste. These are useless brown cubes you accrue during a race which represent wear on your car, a smart mechanic from the original. Sponsors do other stuff too: sometimes they let you buy or swap a few more cubes but the effect is rarely interesting.

As, in fact, are the seasons themselves. It turns out that campaign play is a nasty catch-22. Racing Season tries hard to keep everyone engaged down to the last race. But in doing so, it makes you wonder why you're bothering with all the preceding races. Might as well stick with just the one.

However, while the season rules might be the big draw, they are not the only thing in this expansion. And it turns out that all the other stuff outshines the seasons in a big way.

First, as you might expect, there are a bunch of new cards. Given the simple mechanics of the base game, you might expect the designer had limited room to improve on the card effects. You'd be wrong. Almost all the new cards are full of smart design that let you change the game in new and interesting ways. Not to mention interacting with the base game ones to let you build more strategies.

Take one of the new yellow Garage cards, for instance, Factory Support. You start with lots of yellow in your bag, so most of the yellow effects in the base game were a bit meh. The cubes often just got used as currency. But Factory Support is not meh. It lets you permanently remove a cube to draw another. The obvious use for this is to remove waste, but it's a double-edged sword. If you do that, you can't spend the currency. Plus you don't start with any waste. It leaves you with the wicked temptation of sacrificing a useful cube in the hope of drawing a more useful cube. A simple effect, full of devilish choices.

Two of the three new tracks push that temptation to the fore. Monte Carlo is a tiny, tight track with vicious corners that reward lower gear cards. Racing on it with more than two players is a knife-fight of drafting and blocking. Talledega is a much bigger track which demands the opposite approach, lots of high gear cards. You can, of course, try to manipulate the cards you're playing with to make the most of these different approaches. That third track, Tuscon, has a lot of multi-coloured spaces and looks dull at first glance. It is, however, incredibly fast: it's possible to lap other players in a single move. Played with a high number of laps, it turns out to offer its own particular challenges.

The two short tracks also offer a way to make the most of the seasons themselves. Racing on them can be super quick, especially if you stick to the standard 3 laps. Using those two plus one of the longer tracks means a whole season can wrap in under two hours. That makes it look a whole lot more appealing. It's worth noting that there are minor issues with the board printing on the new tracks. The colours don't match those in the original, and it doesn't fold in half like the rules suggest it should.

The final part of the new engine is the driver cards. These give your car a special ability which you can use each turn. Many of them are transformative. One allows you to move a pale gray space for each wear gained, for example, while another lets  you put cubes back in your bag from your discard pile. Not only are these interesting in their own right, they open up a raft of new options when combined with the cards you're using.

Between cards, tracks and drivers, Racing Season elevates the original into something special. At times, it offers you so many new options that it can almost feel like playing a whole new game. Yet it never loses sight of what makes Automobiles special: that sweet interlocking of theme, strategy and excitement that lets skilled players get ahead while leaving everyone else a hope of catching up. It's been a favourite for two whole years. Racing Season should make sure it stays one for many more.

May 29, 2018
Rating
4.0
Automobiles: Racing Season
The new tracks and cards are excellent, extending rather than replacing the play value of the base game. Season play is fun, but not the star attraction is should be.
MT
Matt Thrower #1 Reviewer 286 reviews

SuperflyPete replied the topic: #257904 20 Nov 2017 07:59
I did a review at MM that mirrors yours quite a bit. This is a fantastic review for a really quality expansion. My only real bitch is that the box is mostly empty! The sponsors add a lot of fun, and the track is easily more fun than the original. I just adore it. Unfortunately, I only get to game once a month if I’m lucky and this doesn’t get asked for.


I have this and the base game for sale/trade for any readers who are convinced by this review!

Cranberries replied the topic: #257914 20 Nov 2017 10:10
Thanks for this review, I really enjoyed it. My kids like Dominion and they like Daytona 500, so I may get this or Downforce. I saw the expansion for only $15 at the recent Utah board game sale, but didn't know enough to pull the trigger. Plus, I keep saying I'm selling my collection, then buy more games, so that's shameful.
Read More...