Four Against Darkness in Review 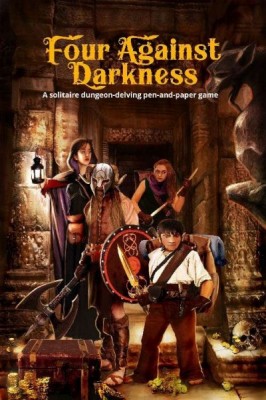 The most compelling thing about Ganesha Games’ Four Against Darkness isn't that it appeared seemingly out of nowhere to climb the top games ranking over at another board games site two years after its release. It's that it flies so defiantly in the face of trend, daring a couple of generations' worth of gamers that have been reared on mountains of heart tokens, endless doom trackers, and scores of bubblegum machine figures to go back to the basics.

And by that, I mean to classical Gygaxian fantasy gaming and old timey hobby gaming components- pencil, paper, and dice. It is atavistic to say the least - yet it somehow manages to capture all of the elements of the dungeoncrawl genre in a reverential, traditional manner. There's no need for a rondel, pegboard character cards, or puzzle-piece dungeon tiles. It hearkens back to the days when role-playing games would have, on the first page of text, an answer to the question "where is the board?"

After pawing through box after box of modern components such as those enumerated above, and finding little more than redundancy, mediocrity, and the perpetuated myth that flavor text and pictures equate to "dripping with theme", it's refreshing to be tasked with drawing a map on graph paper. And rolling on a table to determine what is in a room or what treasure you find there after stomping the resident monsters is not a fundamentally different randomizer than drawing a card. It's just more compact. I was quite taken by surprise that playing this game, which you can pick up as a print-on-your-own PDF for $8, felt very similar to any number of attempts that board game designers have made to recapture that feeling of the 1st level D&D hack-and-slash adventure.

There's very little modernity or bullshit in Four Against Darkness, aside from the structure of the 91-page rulebook which descends from bullshit level to utter screaming bullshit level. It's a tragic mess, organized to the meter of nightmare logic, and that is quite a major setback given that the rulebook is the game and flipping through it to reference the rules (as simple as they are) and tables is a requirement. Once you get used to the bizarre order of explanation or do the smart thing and manually reorder the pages after you've printed it, Andrea Sfiligoi’s design emerges as an addictive roguelike full of dice-throwing, the occasional do-or-die choice, and even a little character progression if you survive enough minion or boss encounters.

But make no mistake- this is not a substitute for D&D or other more robust games where storytelling is prioritized over victimizing dungeon denizens and taking their belongings.  Four Against Darkness is designed primarily for solo play, and what it offers is a highly abstracted dungeoncrawl experience with minimal overhead. Once you've chosen characters- we're talking stock warrior/wizard/rogue/cleric types here- and maybe spent some gold to outfit them, it's all about moving room to room and rolling to see what happens. Combat is ultra-streamlined, with monster level representing a to-hit or to-defend number on a D6. But there are a few impactful details- marching order affects who can attack in tight corridors, just like in the old Dungeon Master-style PC games. Big groups of minion- or vermin- class monsters can fail morale checks and flee. There are slashing and crushing weapons that impart bonuses against some types of enemies. Monsters have varying behaviors, hatreds, and some can even be bribed to go away.

It is also not a highly tactical, square-by-square design. It's not "clever" or really even "sophisticated". It's a little raw, very loosely written in some places (such as how the game ends), and at its worst it comes across like the shaky first edition of an awesome second edition that exists somewhere in our future. If there is anywhere that I feel like the game completely fails, other than that accursed rulebook, it's that its scope is too limited. A D6 treasure table never feels like enough. I find myself wanting it to be a D66 table. Inevitably, you will fight the same monsters and find the same treasures over the course of a few games. There are very limited spells (like, 6) and not much equipment. I continually find myself debating whether I actually want there to be more of everything or if the game is just right as it is given its scope and overall goal.

And there is more of it, if you get tired of fighting Fungi Folk for a gem worth 2d6x5 gold. There several expansion books available, including Fiendish Foes that provides all-new monster and treasure tables. There is also Four Against The Abyss, which is intended for experienced characters of level 5 and up. Standalone adventures add more gamebook-y narrative, mini-campaigns, and scenario-specific content. There are even a couple of modules that add a historical element, sending you on quests for the Grail or the Spear of Destiny. None of this costs much. Even the printed books are only like six bucks. You can buy everything available for this game for less than 1/3 the retail cost of today's standard titles in this genre.

I can't deny that part of my love for Four Against Darkness, especially today when it is perched atop an arbitrary popularity list ahead of Gloomhaven and other titles, is that it is a callback to the kinds of games that got me into this hobby in the first place back in the early 1980s. I love that feeling of getting back to simple, somewhat crude gaming that is far removed from the over-designed and over-sanitized, risk-free and homogenized games today. It's roots gaming, and with the rising popularity of "roll and write" designs and a swelling underground of relatively low-fi tabletop games, I can only hope that the attention given to Four Against Darkness is the sign of an emerging trend that sticks a middle finger in the face of the $300 Kickstarters and endless product line expansions.

May 16, 2018 (Updated: May 17, 2018)
Rating
4.0
Four Against Darkness
Critical Hits: Great lo-fi dungeoncrawling, about as inexpensive and minimal as games in this genre get, surprisingly complete compared to larger dungeon crawls.

barrowdown replied the topic: #272326 30 Apr 2018 17:57
So I like the review, but I feel like it should have some minor information about the game (namely: publisher, designer and year published).

barrowdown wrote: So I like the review, but I feel like it should have some minor information about the game (namely: publisher, designer and year published).

Based on the first sentence of the review I think the publisher is Ganesha Games and it was published two years ago. The designer isn't named on the cover of the game either.

barrowdown wrote: So I like the review, but I feel like it should have some minor information about the game (namely: publisher, designer and year published).

Based on the first sentence of the review I think the publisher is Ganesha Games and it was published two years ago. The designer isn't named on the cover of the game either.

I am apparently an idiot.

Gary Sax replied the topic: #272338 30 Apr 2018 20:29
This honestly sort of reminds me of the review Charles wrote of City of Kings. It's like the exact polar opposites, filed along with 1st edition D+Dish Dungeon Degenerates. Not because City of Kings is euroish, but rather because it, like Shadows of Malice, is totally content to be nonspecific. Enemies are drawn randomly and only characteristics, not some super specific identity.

If I had a big request for a feature on There Will Be Games it would be a roundtable feature running down a genre (eg dungeon adventure) and the different approaches to it from releases in the last few years. Bonus points if it was willing to bring up some heroic failures/non-sellers.

Michael Barnes replied the topic: #273457 16 May 2018 22:26
Ah, sorry Tom- I never responded to this. I’d say it is somewhat similar, but the T&T solo games were an attempt to make the full T&T system playable by one player with a more gamebook like approach. The base 4AD game is straight hack and slash- no “turn to 437” or anything like that.

Now, with that said, the expansion adventures are much close to T&T solo adventures. They have text and all that.

Shellhead replied the topic: #273459 16 May 2018 23:08
Even before I got to your bio box at the end, I was thinking about Dungeon. Specifically that Dungeon is probably a better game than the base game of Four Against Darkness, even though Dungeon isn't a very good game. You may be enjoying the nostalgia more than the game.
Read More...