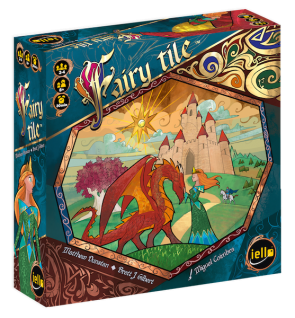 Iello's Fairy Tile, designed by Matthew Dunstan and Brett Gilbert, asks players to complete a bespoke story by positioning three figures representing a knight, a princess and a dragon around a modular board.

Over the course of the game, the dramatis personae will meet, visit story-dictated lands of varying terrain types and sizes, and they will be tasked with seeing each other across the hexes of the map. A turn consists of either adding a geomorphic map tile or moving one of the figures. If you manage to get into position on your turn to satisfy your current story card, you get to flip to your next one and you get a magic token that will grant you an extra move on a future turn. If you complete your deck of story cards, you've won the game.

No doubt, this is simple family fare and despite some minor misgivings, I think it's a lock for a 2018 Spiel des Jahres nomination. It's the right mix of subject matter, smart mechanics, and it doesn't hurt that Miguel Coimbra's stained glass-influenced illustrations and the overall graphic design look amazing. It's a darling little game befitting of its too-clever title but it can feel slight and the concept can come across as somewhat underexplored. It is also a fundamentally abstract game despite the lovely painted miniatures, the storybook setting, and flavor text. This isn't necessarily a problem, but there is something of a disconnection when a game that is about constructing a story lacks, well, a sense of storytelling.

It is purely about situational positioning. This is where the game gets quite clever, because each of the three figures has a different type of movement. The Knight can charge through two hexes worth of terrain to get to where he needs to be. The Princess is more complicated, of course. She can teleport from castle to castle, either before or after a single hex move. The Dragon can fly all the way to the other side of the map, even crossing over areas that haven't been filled in by the three-hex land tile pieces. Coordinating movement is both tricky and key; earning that magic token is a significant advantage as it allows you to position two out of the three figures or move a single figure more than once on a turn.

What I really enjoy about this game is the same thing that makes my kids and more cerebral game players frustrated with it. Every turn is a micro-puzzle where you have to look at your objective, the land tile that is available to place if you choose to do so, and how each of the three figures moves and where they need to be to fulfill your story card. It's not about long-term setup, it is all about short-term execution. There is no strategy or planning here, it is one hundred percent about making the most of your turn when it comes around. You might move the Knight on your turn and then hope that by the time it comes back to you that you can move the Princess like you need to, but good luck with that.

This means, naturally, that two player contests are going to have more control which might be more satisfying for some players. At four, all bets are off every turn. For us, three players is definitely the sweet spot between control and chaos.

Another aspect that I especially like is also where the design begins to feel somewhat shaky. This is very much a game about keeping pace, and as such I really like the tension of feeling like I must complete a story card in order to either preserve a lead or to keep up with the leader. It adds a sense of drama the game would otherwise be lacking. But should you fall behind a couple of rounds because your current story card isn't matching up where the figures are winding by the time it's your go, it can be very difficult - if not impossible - to remain competitive throughout the game. By the same token, an early leader can be waylaid in a similar situation where things are not synching up and the advantage cannot be pressed.

This means total blowouts are possible as are plays that follow an undesirable arc where a player or two simply can't make progress or keep up. This is caused simply by the way the cards are dealt, what

land tiles are available, and who moves what at which time. I usually don't like rubber banding mechanics or artificial balancers, but I've played a couple of games of Fairy Tile that felt like they needed something like that. It almost feels like the game is too simple, that it might have needed more elements or subroutines to give players more agency. But I am also of the mind that this design is so cleanly executed and so excellently editorial in how it is written that I believe I would be disappointed if it presented any more rules, mechanics, or systems other than what the designers have already prescribed.

But it is almost counterproductive to speak about such a light and otherwise charming design in terms of minor shortcomings or the expectations we may hold against designs larger in scope. Fairy Tile leverages good looks, ease of play, and a focused design concept to create an appealing and fun-to-play experience. Serious critical rigor, as is the case with many Spiel des Jahres-caliber titles, is almost irrelevant when family-friendly fun and accessibility are the qualities that should be regarded as primary.

mads b. replied the topic: #273120 11 May 2018 07:13
I've played this two player with my nine year-old some times. It's fun and very good looking, but it's also somewhat lacking. The storytelling aspect is almost laughable, and I was disappointed to learn that not only can you only build one story every time you play, it's also a very traditional tale of boy kills dragon and rescues girl.

Now, we've only played short games so far (only dealing out five cards to each), but we've also rarely had much reason to build a big board or move the characters around a lot. However I don't think being left behind is that big an issue. If you have a bad card you can always draw a new one which will give you an extra turn at a later time.

I'm gonna play this some more, but it's not really a game about fairy tales, and that was a bit of a letdown.
Read More...