Azul Board Game in Review 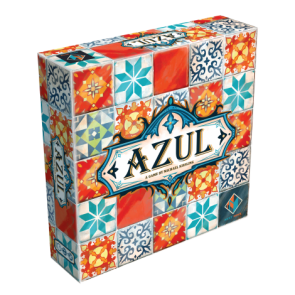 Azul is all about using beautiful Spanish tiles to create a wall design. That subject matter may not be the most evocative or exciting (unless you're abnormally enamored with décor), but it doesn't matter. The game is basically an abstract title with pretty pieces. But it does demonstrate how exceptional and fulfilling a game can be even without an interesting setting.

At game start, several depots are placed in a circle and each gets four tiles randomly grabbed from the bag. On a turn, a player can choose any color and grab all the tiles of that color from one depot. The remaining tiles are pushed into the center. Future players can do the same on other depots or grab a color from the center. The trick is that more isn't always better. If you don't have room on one of your building areas for the tiles, they have to go to your broken area, where they will incur a penalty by way of negative points.

Once all the tiles have been claimed, you place them from your building area onto the wall and score each of them. This can be done simultaneously by all players. Once complete, you start the next round. The game continues until one player has completed a row across. At that point, highest score wins.

Azul feels like a euro design from the early aughts and that comes with a few expectations. The setting and any notion of theme are ancillary, the rules are simple, and the playtime is fairly short. But it also emulates one of the classic "German Game" genre's best features - the simple ruleset gives rise to surprisingly deep, tactical play. On a first play, it's easy to overlook this trait. Just grab the tiles that help you, right? Build your wall and get your points. But that method of play not only misses out on exploring the genius of the game, but will also likely result in a loss.

You see, Azul isn't just about getting the particular tiles and patterns you want. It's just as much, if not more, about making sure the other players can't get theirs. A depot might have two reds and I need two reds. Easy choice, right? But if I take the two reds, I push two blues into the center. Combined with the two blues already there, and that's an easy four blue pickup that my opponent would love to have. So I don't take those two reds. Maybe instead I take the blues myself so that my opponent won't get them. Or I take from another depot knowing that I can come back to the reds later.

The result is a surprisingly interactive experience where you are constantly looking at what your opponents have. And, based on that information, you are doing your best to infer what they want on the board and then make those choices more difficult. They want the two white tiles? Take something from that depot and push the whites to the center. Now there are five white tiles and that'll result in excess - giving them negative points. Observation is not always interaction, it's true, but it's common to have some playful banter going on followed by silence as your opponent makes their final choice on tiles. You hold your breath as they reach out their hand, hoping against hope they don't impact the tiles you want. And, inevitably, they seem to make things harder for you. You curse their name and their birth, but it only produces gleeful smiles.

It's fairly surprising that an (essentially) abstract title can produce those feelings. They tend to be too-dry affairs typified by lengthy turns spent deep in thought. Even better, Azul's simple ruleset means it's the kind of game that can be enjoyed by casual gamers while at the same time producing tactical and strategic choices that can satisfy hobbyists. It's something you can play on game night, but also something you can enjoy with your parents. Still, that strength is also the main negative. Azul is simple and quick, but that means it lacks the depth and involvement you'd get from a longer game. While the game is tactically interesting, there are few long term plans that you rise and fall with the (nonexistent) narrative of the play. Because of this, Azul is definitely a good game, maybe even excellent, that brings the joy of solid tactical decisions to a short playtime and an accessible rules set. That said, it misses out on joining the ranks of the truly great or exceptional because it fails to provide a memorable experience beyond the game as it is played.

Shellhead replied the topic: #273443 16 May 2018 18:31
This is my favorite kind of game review. Skip the parts inventory and the rules lesson, and get straight to the essence of the game. Give a good idea of what the game is about, and what is good or bad about it. Based on this review, I know that Azul isn't my kind of game, but I know of at least a couple of friends who would likely enjoy it.

Michael Barnes replied the topic: #273445 16 May 2018 18:51
My man Drew is always on point with his stuff- straightforward, no BS. I can always count on him for solid material. He’s kind of our main man when it comes to the heavier Euro stuff but he can flex into other areas equally well.

He was one of the first writers Charlie and I brought on back when Review Corner started.

Josh Look replied the topic: #273470 17 May 2018 09:54
I’ve been playing Azul quite a bit and I really enjoy it. Drew really nailed it with this review. It’s not the kind of game where a month later you’ll say to your friends, “Remember that one game of Azul where....,” but you’ll be engaged with it while it’s on the table. It does have a surprising amount of interaction, and just the kind found in games like Race For the Galaxy, where not paying attention to what someone else it doing might result in a lower score. No, Azul is a game where you can genuinely ruin someone’s plans it you can put together what they’re doing. Something about it feels like a competitive video game puzzle game.

Abstracts aren’t at all my thing, but this one does enough that I like that I’m happy to own it.

SuperflyTNT wrote: If I had to choose Azul or Patchwork in the “tile laying space” I’d choose Patchwork 10/10 times.

Holy God, no. I can't stand Patchwork, it felt like a total crapshoot nine games out of ten and I found it really dull to boot. Azul is far better. Got my own review of it in the pipe for sometime in the near future.

SuperflyTNT wrote: If I had to choose Azul or Patchwork in the “tile laying space” I’d choose Patchwork 10/10 times.

Holy God, no. I can't stand Patchwork, it felt like a total crapshoot nine games out of ten and I found it really dull to boot. Azul is far better. Got my own review of it in the pipe for sometime in the near future.

To be fair, I didn’t posit that YOU would do the same as me

I love Patchwork. It’s certainly not a crapshoot. It’s one of those games that rewards the ability to analyze and predict the position marker and your tile layouts. I’ve played it maybe 15 times now and it’s definitely deeper than one would surmise at first glance.

I’ve long held the title of “Closet Euro Fan” with the F:AT Thursday crew (suppose we’ll have to change our name), which used to annoy me, but not so much after I realized I do kind of like Euros.

Legomancer replied the topic: #273589 18 May 2018 09:14
Azul is okay, but if the tiles weren't lovely, it wouldn't be getting half the hype. It's in there with Century, Splendor, and all these roll-and-write games that suddenly everyone feels like they need a ton of. They're the board game version of waiting-room games on your phone. If we're rain dancing until someone else arrives, I'll happily play Azul, and if there were an app for it I'd probably get it and every now and then play against an AI or whatever, but playing these games is only a slightly different experience than not playing them.

I’ve long held the title of “Closet Euro Fan” with the F:AT Thursday crew (suppose we’ll have to change our name), which used to annoy me, but not so much after I realized I do kind of like Euros.

I don't mind pre-2000 & early 2000s German games and used to play quite a few back then (Settlers, Tikal, Big City, Elfenland, El Grande, Die Händler, Wallenstein, Mississippi Queen) but, to me, Euro type games seemed to have evolved from them around that time and became more about putting in as many elegant mechanics as possible and less game ... definitely a genuine genre but not my flavour.

"A ZUUL: The Strategic Game of GateKeepers and KeyMasters"
Read More...