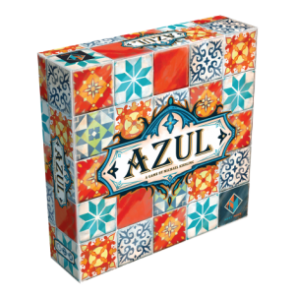 Azul sits out on the shelf, because there are too many games and I can't find anywhere to put it away. Elder daughter arrives home and seizes on it with a level of enthusiasm only a pre-teen can muster. "OH my GOD that is the MOST GORGEOUS game I have EVER SEEN!". There is a pause. "What is it?"

I explain it's a game about tiling walls. Her enthusiasm cools noticeably. But we play it anyway.

My revelation of the one hundred little plastic tiles in the box restores her enthusiasm right away. I was dubious about their appeal, but they are lovely things, smooth and square and fat with promise like the chews that ruined my own childhood teeth. Tipping them into the bag provided, swirling them around, hearing them click on one another is supremely satisfying.

Half the game is in drafting these tiny tiles. They start in random groups of four and you can grab all the ones of the same colour from a group and push the rest into the middle of the table. This pile, which becomes home to all the unloved rejected tiles from the groups of four, is then available for drafting in its own right. You can then use your drafted tiles to decorate a lovely wall on your play mat.

At first we draft, and then we tile. You have to collect certain combinations of tiles, and it seems ludicrously easy. I'd thought so when I read the rules, from which I gleaned this was very much an abstract and what sounded like a very dull one at that. The game ends quickly, and I win, totally convinced we were playing it wrong.

We are. The players have to draft all the tiles onto their boards before they can make them into a lovely wall. This is where much of the game is. Because woe to you if you run out of space to put a particular colour of tile. It's very easy to do - you have to keep picking up until they're all gone, remember - and then any more of that colour become ceramic millstones around your neck. They go on your "floor" and cost you points at the end of the game.

I don't know it at the time, but that wrongly-played game of Azul is the last one I will ever win.

We play our first proper draft, and fitting in the tiles where we want them becomes a whole lot harder. You get extra points for squeezing in tiles next to each other, horizontally and vertically. So drafting to get what you want demands planning. More planning than my poor middle-aged brain can cope with. Then, it gets worse, since your existing tiles block you from collecting the same colour in the same row again.

"So," says elder daughter, frowning toward the end of our second proper draft. "If I take these blue ones that means all seven of those yellow ones end up on your floor? Right?" She is right. They cost me a lot of points and the game. Azul is not a tedious abstract. Not at all.

Next day is Tabletop Day, so I take both daughter and Azul along to play it with some local game club members. A jolly man in a jolly Hawaiian shirt, covered in parrots, joins us, introducing himself as Joe. He wants to play Azul because he's off to a game convention and, knowing it's a hot title, wants to get a jump start.

We do the lovely click-clack to distribute the tiles and get stuck in. This time, I focus on trying to get the pattern right. To get the biggest bonuses you need to get tiles on the lowest, hardest line. But then again you can do quite well just fitting tiles into the middle of growing rows and columns. It's an interesting spatial puzzle that would make a lot of geometrists very happy.

The game feels quite different with three. It's more friendly, almost convivial, since hate-drafting to stop the next player in line getting what they need is of limited use. Good job, too, since we're playing with a relative stranger. Turn order becomes a bit of an issue, as I'm going before my daughter, so she can bounce off my poor plays for an advantage.

I'm so focused on getting the pattern right, that I fail to spot the fact that I'm falling behind in points. Then I fail to spot the fact that Joe has ensured I'm left with a collection of red tiles that I can't use, which end up on my floor. He beams pleasantly in his parrot shirt as I count my already lagging score marker further down. He narrowly wins the game from my daughter. I am nowhere.

I am determined to work out what I'm doing wrong.

One thing I was right about was the geometrists. One of them has written a computer program to solve the puzzle of maximizing points from where you place your tiles. This seems almost comically nerdy and dry until I remember that very morning I wrote a program to analyze the ranking system in Hearthstone. Besides, placing tiles in Azul doesn't feel comically dry and nerdy. Slotting in with all the other bits of the game it feels alive and compelling.

I try out what I've learned against daughter, who plays while she's painting her nails. She spends half an hour Sliding pieces across her board with a finger as bright as the tiles themselves, without apparent effort or thought. I, meanwhile, concentrate on getting as many points as possible from my pattern. This racks up points, but I take my eye off the draft and end up with so many tiles on my floor that I could open my own ceramic factory. My score plummets, she crucifies me and dances off, blowing on her hands as she goes.

My mathematician friend plays a visit to play something. "What's this?" he asks, pulling it off the shelf. I swiftly deflect his attention with some pretty miniatures, knowing how this will end. But it's no good.

As we play, I try and piece it all together like a shattered slate. It feels a lot like I'm trying to juggle those damn tiles, whose bright chunky colours almost seem to be mocking me. You need points from the pattern, yes, and you need to leave tiles for other people's floors while keeping your own clean. That, in turn, means watching and planning and keeping space free on your play board. That, in turn, makes it hard to get pattern points. The things spin round and round your head and every pass the rounded corners look sharper and sharper until - crash! - they're all on my floor again.

Azul goes back on the shelf again. The candy pieces are too bright, too tempting, too liable to break your teeth if you try to eat them. But it'll come down again, soon. First I need to slay some dragons and shoot some aliens. Then, more importantly, I need to take a deep breath and learn some patience and humility. Then, maybe, I'll be hard enough to take another bite.

May 18, 2018 (Updated: May 22, 2018)
Rating
3.0
Azul
Lovely components, easy rules and an addictive feedback loop, but under all the candy it still has that dry, mechanical abstract feel.
MT
Matt Thrower #1 Reviewer 286 reviews

Josh Look replied the topic: #276703 02 Jul 2018 08:03
It’s mechanical and abstract, but it’s certainly an above average mechanical abstract game. I play like a complete jerk and I’ve forced someone to completely fill their floor more than a few times. I’m actually worse in multiplayer games. None of this is to say I’m any good, just that I’ve really latched on to the more aggressive playstyle in this one.
Read More...