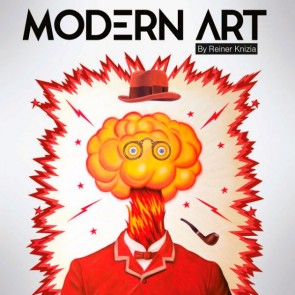 "Even if the people here tonight were initially lured into the auction room by a love of art, they find themselves participating in a spectacle where the dollar value of the work has virtually slaughtered its other meanings." -Sarah Thornton.

In the introduction to his book What Are You Looking At?, art writer Will Gompertz offers a reassurance to nervous readers. He states, "As with most seemingly impenetrable subjects, art is like a game; all you really need to know is the basic rules and regulations for the once baffling to start making some sense." He wants folks to know that, despite its reputation for difficulty, they are smart enough and educated enough to make sense of modern art's abstract smears and spattered canvases. You just have to crack through the imposing exterior and you'll find something comprehensible underneath.

Reiner Knizia's Modern Art, on the other hand, might have the opposite problem. Its cheery presentation and simple mechanics hide a dark heart of manipulation, greed, and cutthroat complexity. In it, players take on the role of competing art museums trying to navigate a volatile painting market. Your goal, however, isn't aesthetic. Modern Art doesn't care if you've carefully assembled a gallery of masterpieces-the only metric that matters at the end of the game is your stack of cold, hard cash. For all its gorgeous trappings, this isn't a game about beauty. It's a game about the ugliness of clawing your way to the top, and the things you're willing to do to your friends to get there.

"The auction is the symptom of something much more complex, like a rash. It is vulgar, in the same way that pornography is vulgar." -Keith Tyson

The auction is at the heart of Modern Art. Actually, that's an understatement-the auction is Modern Art. At the beginning of each round, players are dealt a hand of cards, each representing a painting. They then take turns putting a single card from their hand (or occasionally two) up for auction. There is some variation in how the cards are auctioned off-for example, one card might trigger an open auction, with players talking over each other to make the highest offer, while another might start a hidden auction, with players secretly grabbing a fistful of cash and simultaneously revealing their bids. No matter the method, your goal is simple: buy low and sell high. The winner pays the auctioneer and puts the painting in their tableau along with the rest of their collection, which will be sold back to the bank at the end of the round, hopefully for a sizable profit.

It's vintage Eurogames stuff from the era that created Eurogames. The twist-and this is where Modern Art reveals both its genius and its cynical thesis-is that each painting is worthless. They have no value on their own. They only start to become valuable when multiple works from a single artist start to accumulate in the marketplace. There are five artists in the game, and their stock will rise and fall based on nothing more than their popularity. This creates a wonderful arc, with players starting off bidding tentatively, surveying the marketplace in search of the next big thing. Once a few paintings from one artist are sold, players will scramble to get in and profit off them while they're hot, eking out some cash before the bubble bursts.

And the bubble will burst. An artist's career will build from round to round, making their paintings more and more valuable, but there are no sure things in the art world. If an artist isn't one of the top three artists at the end of any given round, their paintings are worth nothing, regardless of previous success. You're only as good as your last show, after all. This creates a delicious sense of desperation, as players must constantly be aware of these shifting tides and be ready to leap from a sinking ship before it takes their fortune down with it. The players that rise to the top will know when to hold 'em, when to fold 'em, and when to unload a pile of worthless paint onto their guileless friends right before the bottom drops out. "Yes, we all know that Silveira just had a bad season, but the time is ripe for his big comeback. Look at this latest masterwork-I think we can all agree that this is worst at least 30,000 dollars, right? Who'll place the first bid?"

"Buying is more American than thinking, and I'm as American as they come." -Andy Warhol

Even though the game is utterly simple, it stays compelling because the puzzle it asks you to solve is ultimately social rather than mechanical. Calculating the potential profit of a given painting is easy-what's challenging is figuring out how to wring out its maximum value while the schemers around you try and do the same. This means the nature of the game changes depending on the people playing it. Play with a group of hardened gamers, and Modern Art feels like a tense duel of razor-thin margins and bold gambles. Whereas with a more casual group, it can feel more like a party game, with folks getting charmed out of their wallets by a particularly striking piece of art or hilarious pitch.

The game can feel the most alive (and at its most frustrating) when you have a combination of veteran and casual gamers sitting at the same table. The vets will often find themselves preying on the newer folks, experienced operatives competing with each other to sweet-talk the dilettantes into crushingly bad deals. While this can be infuriating, especially if you're the type of player who rages when your plans are thwarted by someone else's suboptimal move, this sharks-and-minnows dynamic creates exciting moments of laughter and groaning in equal measure. It's also eerily reminiscent of the Wall Street broker vs. legacy millionaire ecosystem that powers the actual art market.

All of this leads to the reason Modern Art stands head and shoulders over its auction-based brethren, and it's the same reason it's been reprinted a million times since it was first released all the way back in 1992: theme. This may sound strange, especially in an era where "theme" is usually found in endless paragraphs of bland flavor text about orcs or robots or whatever. But in its seamless pairing of subject matter and mechanics, Modern Art masterfully manufactures the feeling of being a player in an industry defined by the fickle and arbitrary tastes of the fabulously wealthy. It both recreates the art world and presents a nervy critique of it-no small feat for a game that essentially consists of a deck of cards and a pile of tokens.

CMON's production does this classic game justice. The components are all stylish and functional, and the deck of paintings presents an array of different styles that pop even when shrunk down to handheld size. CMON made the compelling decision to feature paintings from five contemporary working artists rather than reaching back to known classics. This adds another fascinating layer to your wheeling and dealing-each fake auction is centered around the dreams and livelihood of a real person, which makes the stakes seem even higher. Ultimately, it's this feeling of high stakes, paired with the very human interactions they engender, that ensures that this game will have a well-deserved place on our shelves for decades to come.

I find it weirdly interesting that European designers became famous in the game space for stripped down exercises of market mechanics. On the other hand, maybe it makes sense a lot of sense if you think of many of these games (esp. Knizia, Splotter, etc) as critiques of market failures.

I think using actual modern artists for the components is an interesting choice. I think the theme of the game might shine through better if the art was just sort of weird pseudo-art. As you point out, the perception-based value of things in market systems is kind of the point in this game.

Michael Barnes replied the topic: #273932 23 May 2018 11:47
Well, you know, the older editions DID have sort of intentionally bad approximations of modern art (such a misunderstood and misrepresented term...). I kind of think that some of the subtext is lost in this new edition because it’s not Liquid Metal, Christin P. and all of that.

WadeMonnig replied the topic: #273933 23 May 2018 11:51
It's funny that the thought of auction mechanics in a modern setting in general doesn't appeal to me but I'll bid for favor of the gods in cyclades like there is no tomorrow.

Michael Barnes wrote: Well, you know, the older editions DID have sort of intentionally bad approximations of modern art (such a misunderstood and misrepresented term...). I kind of think that some of the subtext is lost in this new edition because it’s not Liquid Metal, Christin P. and all of that.

Yeah, the older version had bad art to emphasize that you aren't suppose to be bidding on the quality of the painting. You're bidding as investment only.

Gary Sax wrote: Great review.
I think using actual modern artists for the components is an interesting choice. I think the theme of the game might shine through better if the art was just sort of weird pseudo-art. As you point out, the perception-based value of things in market systems is kind of the point in this game.

To some degree I agree with you, in that the theme might be more pure. However, I like the cognitive dissonance that using "real art" creates. Oftentimes we'll start out the game oohing and aahing over a particular piece of art, but by the end of the game we barely look at them. I think the weird numbing effect of the market is a pretty interesting feature.

I'm ashamed to say that in all my years of board gaming I've never actually played this. There were so many auction games around at the turn of the millennium that I didn't see the need for another. And no one I know owns a copy.

Makes me want to give it a whirl though. Very much like the idea of using real art. Among points already raised, it creates a nice contrast between art as art and art as investment.

san il defanso replied the topic: #273982 24 May 2018 00:06
I go back and forth about the new art. On one hand I think it does undermine the theme just a little to have actual decent art on the cards. But on the other hand I like the exposure it gives to those specific artists, and I think it's pretty darn good to boot. The new edition is graphically VERY good. It's easy to understand and looks very nice too.

The funny thing about Modern Art is that my big criticism about the game when I first played it ended up being its secret weapon. I originally thought that the game was way too fragile, allowing bad players to throw the whole thing off and give the game away. That is definitely true, but that's part of why the game works in the first place, thematically. And anyway, I've learned a greater appreciation of games that make the players figure out how to balance them.
Read More...