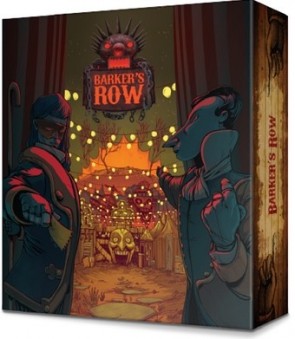 Barker's Row is an Overworld Games production of a Steve Aramini design, and it is definitely something worth taking a look at if you favor classic Eurogames-style rules with low complexity but intriguing gameplay. Or if you are a former carny, sideshow freak, or a huckster and you want a game that will remind you of the good old days of drawing in the Rubes. I'm a little disappointed that the illustrations aren't authentic, vintage carnival artwork but the Mignola-influenced look of the game (executed by Andrea Olgiatti) is certainly possessed of a dark pulchritude that captures the spooky atmosphere of the carnival midway. Add in 3D cardboard grandstands for every player, illustrated meeples for the Rubes, and a Strongman Tower used to track the value of your show and it's a lovely production that is sure to charm and delight.

The goal of this 25-45 minute game is for each of the players, representing a carnival barker of course, to attract enough Rubes to fill in their 13-seat grandstand. Whoever does so first is the winner, and the way you go about this is by presenting Attractions such as the Magnificent and Unfathomable Mr. Volcano, the Mystifying and Curious Tiki Idol, or the Majestic, Jaw Dropping, Confounding, Hairy Girl-Rilla. Every player has a hand of Attraction cards in four suits - Horrors, Beasts, Oddities, and plain old Freaks. On your turn, you choose one of three face-up cards from Barker's Row to add to a Midway display. These cards are in the same suits (with the addition of a Wild) and playing one to the Midway increases the value of attractions in that suit. Once a suit's value meets a minimum level- which is unique to each player and escalates with each Attraction you play- you can cash in the cards from the Midway and play an Attraction to your stage, which makes two rubes take a seat. I especially like how the Barker cards are where you get those wonderfully hyperbolic words, so that when you play an attraction, you can't help but read out the cards to introduce your new show.

So the core mechanic here is essentially a stock market or investment scheme whereby you are attempting to increase a communal value- but you can't be sure if you are actually assisting other players unless you've managed to somehow shrewdly deduce from their cardplay what they are trying to stage. When an attraction gets played, it also discards cards from the Midway equal to its value so there is something of a push-your-luck element at work, especially when you get toward the end of the game and you are having to put on shows with higher values. However, there's more to this design and this where I think the game goes from being "pretty good" to "really good". The attractions are not just scoring devices. They are also each a unique action card that adds a terrific take-that element and introduces opportunities for crazy combos, shocking reversals of fortune, and stunning power-plays. When an exhibit is on your stage, its power is available and you might enjoy advantages such as playing the top 4 cards off the Barker deck straight into the Midway, stealing Rubes from other players, or altering the values of Midway cards to suit your purposes. Once an Attraction has been used, it is moved to a Retired status. But of course, there are cards that bring Retired attractions back into play. These cards interact with virtually every element within the design. And yes, of course, some of them are wildly OP as the kids say these days.

Between the player-driven uncertainty from turn to turn and the use of these Attraction cards, Barker's Row is not a game of high strategy, and it is really quite capricious. It can also feel somewhat repetitive with many turns consisting of playing a card to the midway and passing on to the next player. At the top level, it's a very well-executed and fun design but it's not particularly innovative or singular- it feels something like a design from the early 2000s. Which is not, in my estimation, necessarily a negative mark. However, with that comment also comes the admonition that like a lot of Eurogames from that time period, the game's sense of specificity only extends as far as the terminology and artwork. It could just as easily have been a renaissance business game. There isn't really anything mechanical about it that creates a narrative to rival the classic Tod Browning film Freaks and you certainly won't be exploring the themes of Bradbury's Something Wicked This Way Comes. But given the scope of the design, that simply isn't the intent- it's a light game with some nasty cardplay that should appeal to a broad range of Rubes.

I love this site.

Shellhead wrote: Your review reminded me that I need to get Freakface, which appears to be The House of 1,000 Corpses of circus games.

I have it if you want it.