The Fox in the Forest in Review 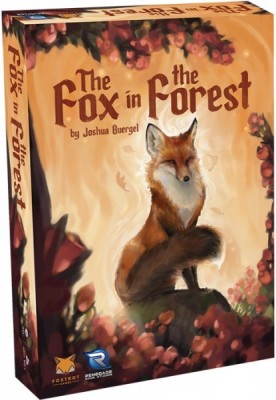 The fox in the forest is a game of wonderful contradictions. It is light in footprint, consisting only of 33 cards and a handful of scoring tiles. Then, that tiny footprint walks all over your notions of what a card game can be. It is simple, yet smart.  Short in the amount of time it takes to play but long on replayability and strategy.

As a trick taking game, most players will be familiar with the basics of play. However, the fact that it is for 2 Players and only features 3 suits of Play (Bells, Keys, and Moons) means that gameplay is tighter and more streamlined. Keeping with the beautiful contradictions theme, this is where they stepped in and added depth and an additional layer of strategy. In each suit, have been given special powers.  For instance, the One card, the lowest and, thus, weakest card in each suit allows you, when you play it, to lead the next trick. Leading a trick usually goes to the person who won the previous trick. Suddenly, losing a trick can allow you to dictate flow of the game.  Combining this card with playing a Three in the next trick, (this allows you to change the “Decree” card: the card that sets the trump suit), and you can literally change the entire landscape of both you and your opponents remaining hands. The cards have a wonderful mixture of powers that allow you to set up wickedly devious plans that are a joy to watch come to fruition or, just as likely, crumble into dust when you opponent dashes it to pieces.

You should be warned not to get too intertwined in dominating each round of the game. Each which consists of 11 cards, the Odd numbered cards, in addition to containing beautiful artwork, player is dealt 13 cards with the remaining cards placed face down in the middle of the table and the top card flipped up to set the Decree of the trump suit. However, scoring isn’t a simple “Whoever wins the most tricks, gets the most points” affair. If you win four, five or six tricks by the end of the round, you will score 1, 2 or 3 points respectively. Take between seven and nine of the 13 tricks and you will score 6 points. However, if you take ten or more tricks, you are dubbed greedy and earn ZERO points. Adding insult to injury, since your opponent scored between zero and three tricks, they receive a “Humble” bonus of 6 points.  It’s rare in a game where you will be dominating each and every trick and suddenly realize you have to lose multiple tricks or all your hard work will be for naught. It is a delicate tightrope act that requires you to play just as smart while winning a trick as it does in losing one. This scoring system also alleviates that sinking feeling you get when you pick up your hand and think “I can’t win with these cards.” Instead, you mentally shift gears, thinking of the best way to lure your opponent into taking a majority of tricks without realizing you are hoping to score “Humble”. It is very exciting to play a trick taking game where it rarely ever came down to “Well, I guess I’ll just play my highest card.” The added nuance that not all cards are always in play keeps it random enough that you simply can’t just count cards to formulate a plan. 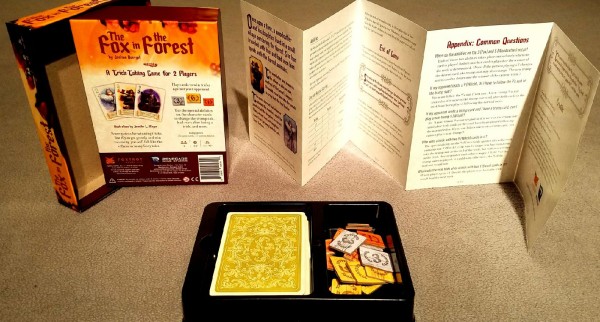 The downsides of The Fox in the Forest are very few. It does only support two players. This may limit when and how often it is brought out to play. I could see a player becoming burned out on this if they were consistently losing but all of my plays have been extremely close scoring wise, with the multiple rounds balancing any runaway victory. The fairy tale theme, while backed up with beautiful artwork, really doesn’t permeate the game. I never found myself saying “Ah Ha! I’m playing to woodcutter!” The actual numbers on the cards and powers they have override any real theme. I can’t see anyone picking up this title for the theme alone. It did, however, do its job: the look is what initially attracted me to the game.

The Fox in the Forest takes minutes to learn, can be played less than a half hour and will provide months of entertainment. It’s a rare beast (A fox in the forest, If you will) that is light yet strategic. It is a Filler title while being an altogether satisfying meal.

Legomancer replied the topic: #274209 29 May 2018 08:33
I don't usually like trick-taking games with special card powers, but FitF does it so well, and so lightly (yet important to the gameplay) that I love it. It's a really good one.

GorillaGrody wrote: Hey,wow. Slept on this when it first popped up, just picked it up (belatedly) on the strength of this review! Thanks!

Also check out Tournament at Camelot, it's better with more players but has a two player mode that involves removing one suit.

Vysetron replied the topic: #297459 21 May 2019 23:06
Between this and Hocus I'm pretty sure Buergel is some kind of cards and numbers wizard. That's a rare type of specialty these days. I think it might be some kind of Highlander situation and Knizia keeps killing them to absorb their power.

What I'm getting at is his games are really good.
Read More...