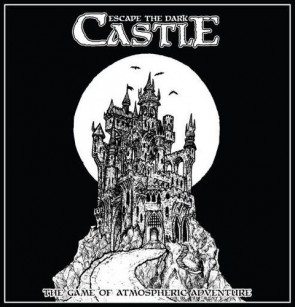 The press release is black. Black font. Black images. Black box art featuring a black pen and ink drawing of a spooky castle thronged with spooky bats. But it's the title that catches my attention. Printed in that font of thick letters inside thin outlines so beloved of Games Workshop of yore, it screams "ESCAPE THE DARK CASTLE".

Both font and words immediately capture my attention.

At the games expo, it's easy to find the stand. It's black. It's also very busy, folk crowded in on two or three tables to play with the black cards and black dice from the black box.

The designer is wearing a white shirt, from which spills endless enthusiasm for the eighties. That's what he's trying to recapture, he explains. He's got a video advert that cleverly riffs on the TV ads for HeroQuest from the time. There's even a soundtrack for the game available in a cassette box. His game is riffing on games of the era like DungeonQuest and Fighting Fantasy. And nostalgia sells: his original Kickstarter raised a ton of money.

He leads me over to a game in progress and shows me an encounter card with a drawing of a skeletal corpse, slain by an arrow and clutching a scroll. The text instructs the players to draw two cards. Eyes shining he describes how just then, in that game, for the first time he'd ever seen, the players drew those exact two items from the deck.

It's clear he's trying to communicate how thematic co-incidences are a critical part of what makes the game fun. But, to be honest, he had me at DungeonQuest.

Back home, I unwrap the black box and find, among the other components, black pencils. The scorepad for tracking hit points is, thankfully, on white paper. I deal out fifteen of the suggestive paperback page-sized encounter cards that will make up our trip through the castle and we're way.

Daughter and I each choose a character. These are not mighty heroes but commoners, Smiths and Tailors. Emaciated wretches, longing to escape imprisonment in the Dark Castle. It's a lovely change in tone. The item deck continues the theme with a few rusted weapons amid endless rotten apples and weevil-infested cheeses.

Thrilling for adventure, daughter is desperate to turn the first card. She regrets it with a squeal of disgust: a gruesome drawing of a burned man. After she reads out some forgettable text, we inevitably have to fight him. This inevitably involves dice. Each character has their own dice, with varying amounts of three different symbols spread across the faces. To beat an enemy you have to roll symbols matching the ones on its card.

We beat the burned man and continue on our way through the revolting bowels of the castle. Several things quickly become apparent. First, that that pen art is much better than the flavour text at evoking the setting. Second, that pretty much everything revolves around rolling dice and matching symbols. Thirdly that this game is hard. We die, horribly, to a horrible trap after a horrible roll.

It's almost all down to the dice and the draw. But in spite of, or rather perhaps because of, the ghoulish gremlins that await in the deep, we want to see more. We deal again. Several of the cards we encounter we've seen before. There are only 45 in the box, so with 15 in each short playthrough, you'll quickly run out of novelty. Inevitably, there is an expansion with more cards, and a current Kickstarter for two more. We die, horribly, to a horrible monster after a horrible roll.

Back on the shelf it goes, a random crapshoot with a great theme. But every time I pass that box, the blackness catches the corner of my eye. There are still many unknown terrors lurking within its inky depths. We haven't even seen a boss card at the bottom of the dungeon yet. Most of all, though, we haven't escaped yet.

It doesn't seem right, leaving those poor devils to rot, hopeless in their cells.

So out it comes again. And next time, we find that if you take care to make the best use of your items, you can buy yourself an edge. We notice that a few of the cards have choices instead of die rolls where you can mitigate the risks you take. We do a little better, reach the exit to the castle and draw one of three boss cards to determine who's guarding it. It's bad news: a horrible foe that does horrible amounts of damage and who kills us horribly.

Beating anything like that seems hopeless, so back on the shelf it goes. And whispers continue to spill out of the blackness, beckoning us all back into the depths. Out it comes again. And again. Sometimes solo. Sometimes the two of us. One time little sister joins in, intrigued by the revolting art. And that becomes a will-she won't-she game of its own as she's torn between wanting to see more and not wanting to see more. It's almost as fun as the game itself.

We beat it, finally, on the eighth attempt. There are whoops and cheers and high-fives all round as the Cook and the Tanner walk free, bloodied, exhausted and blinking against the first dawn they've seen in years. A win, so back on the shelf it goes.

There it sits, like a black hole. And even now I wonder what additional adventures might lie beyond its event horizon. We beat it, but we haven't seen all the cards. We haven't thrown any expansions into its gaping maw. And I wonder, as I continue to toss dice and draw cards toward an uncertain fate, if the Dark Castle I'm really trying to escape is perhaps the gravitational pull of rose-tinted childhood memories.

wadenels replied the topic: #275722 18 Jun 2018 20:38
Great read, and way to capture the feel of the game. I really dig this game. The cards have just enough narrative to set the tone and be interesting. The artwork is on point too. The game sits on such a simple framework that you think, “Why didn’t I think of this?”

My only knock is that from encounter card to card things can feel a bit disjoint. When we play it I read all the cards and — since I’m a pretty quick prereader — I throw a little bit of narrative in between from one card to the next to tie them together a little bit before I start reading the new card out loud. Little flourishes like that can help elevate the game from “Why am I going through the motions of drawing cards and reading them” to “This is our story.”

It’s definitely a game that gives back what you put into it. It’s the type of thing that rewards you for sitting around a table and buying into the experience. It’s the type of narrative thing that I’m really glad can still exist in the land of modern design and refined mechanics.

drewcula replied the topic: #275733 19 Jun 2018 07:56
I've had my copy for months, and have not played it.
I'll correct that error this evening.
I suppose the upcoming session(s) can influence an opinion about the new Kickstarter.

drewcula replied the topic: #275798 20 Jun 2018 07:40
I finally cracked opened my copy last night.
Gruesome and charming all in one.
Simple and... smoky?
I remember Kickstarting this game purely for the illustrations.
I am not disappointed.
They're great.
The game is perfectly fine. My wife and I learned together, and wrapped in the suggested time frame - 30 minutes.
Mad props to the soundtrack. It's great background music.

Has anyone played the 1st expansion? Is anyone getting the 2nd and 3rd?

SuperflyTNT wrote: I want this badly, but not 80 quid badly.