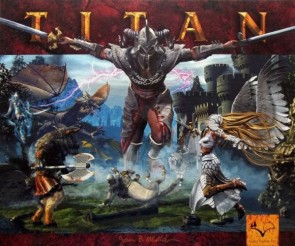 One of the joys of writing for a new audience is getting a clean slate to write on. That means I can revisit a few of my favourite topics that I blundered over while I was still cutting my teeth as a writer and – hopefully – make a better job of them second time around. And frankly I can’t think of many better topics to revisit than the reviews I wrote of my very favourite games. So today I’m going to do just that, starting with the one I’ve been playing the longest: Titan.

When I first played Titan it was long out of print, having been originally released in 1980 by Avalon Hill. The copy I played on was acquired at a car boot sale, and so badly busted up that the board was torn in two, but through all the wear and tear I could still see enough of the charming silhouette counter art – different on almost every one of the hundreds of chits – to fall in love with the design. And as for the game, well, the game blew me away. Four of us started playing on a Monday night at 8pm with work the next day. We eventually called the game prematurely at 4am and drifted off in the half-light of a summer dawn to catch a couple of hours sleep before rolling up at the office, red-eyed and yawning but flushed with exhilaration from the wonderment of the nights’ play. And we all loved the game so much that we did that regularly, week after week, for months on end.

Remember how a couple of weeks ago I talked about how all the current board game design challenges were actually addressed thirty years ago? Titan was a part of that trend. The approach it took to allowing multiple players to duke it out together without letting negotiation and alliances determine the game was so novel that it remains unique. It put all the forces on an abstract board with strange movement restrictions that effectively turned different areas of the board into circular conveyor belts with just one or two points of entry or exit. That made it very difficult to get where you wanted to in Titan, added a strategic element of needing to learn the patterns of movement, and it made targeting other players to help with an alliance or fulfil a grudge match difficult without actually making it totally impossible.

And it was vital that you learned to navigate the maze as well as you could, not so you could hunt down and destroy your enemies but because in Titan you collected new forces by getting pairs of creatures together and moving them back to a space containing their “native” terrain, whereupon you were rewarded by being allowed to recruit a more powerful creature native to that terrain. Get two of those back to their home soil and you’d get an even more powerful monster and so on, until you were collecting Hydras, Serpents or Colossi, the most bad-ass beasts on the board. Does this sound vaguely familiar somehow? You might be thinking of perhaps the tie between terrain and spells in Magic: the Gathering or the tie between terrain and resources in Settlers of Catan for example? Well both of those connections have proven provenance: the designers have either implied or directly recognised their debt to Titan. And given how influential those two games turned out to be, it’s fair to say there are relatively few games that have had a bigger impact on the evolution of game design than Titan.

Hidden in amongst your stacks of ever more powerful troops was your Titan. The Titan rarely got to recruit anything by itself, but it was vital, vital enough to name the game after. Because if your Titan got killed that was it, game over and you were eliminated from what might be a very long game. When you did end up clashing with enemy troops the game shifted into a whole new phase. All the creatures got removed from the main board and were transferred to a smaller, tactical board which represented the specific terrain of the space where you were fighting. This was totally different from strategic board: movement was open, terrain had a direct effect on the fighting abilities of your creatures and a variety of special abilities came into play. Battles tend to be vicious affairs in which one legion is wiped out and the other badly damaged, but the winner got points to compensate. And points made your Titan piece gradually more powerful as well as allowing you to recruit more creatures. The balance between needing points to power your Titan and needing to keep stacks of creatures intact to recruit more powerful pieces is a key part of the strategy.

This split between the tactical and the strategic is one of the things I love the most about Titan. Mastery of both elements is essential if you want to win and it lends the game astonishing depth and re-playability. But it’s also one of the most off-putting things about the design because each battle only involves two players out of the mix and so adds to both downtime and play time. And in a horrible twist because more players mean more battles, unlike most games in which adding a player might roughly double the play time, in Titan adding a player increases time exponentially. You might finish a two-player game in 2-3 hours if you’re lucky. But three players is 4-6 hours, four players is 8-12 hours and beyond that … well, just don’t bother face to face. This is exacerbated by an unfortunate tendency on the part of inexperienced players to fight too often: if you just run away then your enemy only gets half the points and that’s critical, making it pointless to fight battles you’re unlikely to win. But the new player is going to have trouble identifying such battles, leading to far more downtime than is necessary. Fortunately, the game plays very well via e-mail so you can get in those six player slug-fests if you really want to.

In 2008, after many years of desperation from the board gaming community, Valley Games released a re-print. Many were hoping they might have found a workable variant or two to help deal with the play time but none was forthcoming. What they did do was give the game a dramatic face-lift, replacing the charming but rather lo-fi visuals of the original with jaw-dropping full-colour artwork for the vast array of different creatures. It’s a dazzling thing to behold in play, and given the reverence in which the game was held by old-school gamers like me, a lot of new players who’d lost all hope of getting their hands on a copy snapped it up. And most of them found they hated it. They hated the random, dice-based combat and movement. They hated the play time and the downtime and the slow pace.

This made me terribly sad. Not because I get depressed when people don’t like a game I happen to love, but because the comments were indicative of a lack of willingness to properly get to grips with the game and give it its due. A few longer-sighted commentators mentioned this, saying that whilst it was clear there was a lot to explore in terms of strategy they just couldn’t be bothered. But if they had been bothered they would have seen that the timing issues were ameliorated by experience and the increased aggression that it brings. They would have seen that far from being dice-driven and random, Titan was in fact incredibly demanding and strategic (this is fact, not mere opinion: people play Titan in tournaments and the best players win consistently) and has possibly the best balance between control and chaos of any game, ever. They might have learned that during those long pauses in the game you can do other fun stuff like, y’know, actually talk to your fellow gamers.

So yes, it’s sad that no-one has time for games like Titan any more because they’re all busy playing the latest piece of cardboard and wooden trash that’ll last for 2-3 plays (I once heard someone praise a game because it actually made the table 4 times before the group got bored) and then get discarded in favour of the next big thing. I’ve been playing Titan regularly for nearly 15 years and I still love it, although I admit I don’t really place face-to-face any more. If you’re not up for e-mail play then you can still have a fat slice of Titan thanks to a great free Java implementation and a shiny new iOS app. There really is no excuse not to give it the time it deserves any more and to ignorantly proclaim it a poor design or broken just because you can’t find an opportunity to play. So when you’ve had a few games and formed an opinion and found that it’s a negative one, we can talk about it properly. Otherwise, just get on board and play.