Through the Ages Review 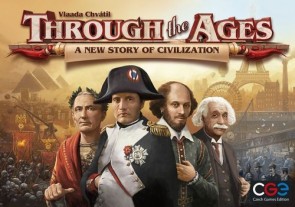 If you're over 22, Civilization board games get caught in a nasty version of Catch-22. Give in to the epic sweep of history that such a game demands, and it'll take 22 hours to play on a huge global map. Cut it back, and you lose that sense of grandeur that separates Civ games from common or garden "dudes on a map" games. It's a conundrum that's rumbled along ever since Francis Tresham's original Civilization. And it took a genius like Vlaada Chvatil to solve it. The answer, it turns out, is to take away that map.

Anyone who's played a Civ game on the computer will recognise this is madness. The most fun bit of developing a culture isn't building temples and pyramids, it's grinding your enemies into the dust. Yet Chvatil has managed to make the business of bureaucracy colossal fun. And, as an added bonus, you still get to grind your enemies into the dust. Just less often, and more abstractly.

Instead of a map, you have a big long row of cards and a player mat. Each turn you spend from a pool of actions to do stuff like build buildings and recruit into your military. You can also grab cards from the row, the further up they are the more actions it costs.

The somewhat daunting rulebook lays out the plethora of different options you have each turn. It's actually quite simple and intuitive when you get the hang of it, and much of the joy in the game comes from all the things you can do. You'll need population to work in your farms and factories. You'll need farms to make population and factories to make stuff to keep your population happy. You'll need good governance to avoid light-fingered courtiers stealing all your production via corruption. You'll need thinkers and scientists to figure out good governance. Most of all, you'll need art and culture to win the game.

It's the classic situation of giving players too much to do and too little to do it with, multiplied a hundredfold. The result feels like juggling chainsaws, only you're more likely to lose friends than fingers. Every turn sees an awful crush of competing demands descending on your feeble human brain, demanding that you prioritise them. Winning and losing often comes down to tiny differences in the triage process.

So far, so like almost any modern worker placement game. Through the Ages needs at least one thing to elevate it from that tiresome mechanical sludge. Brilliantly, it provides three, and makes it into my top ten of all time in the process.

The first thing is the card row. It's full of goodies. There are powerful leaders and wonders for your civilization. There are new technologies to research and helpful one-off actions to give you production or people when you need them. Yet amongst this bounty, not all cards have been created equal. Plus, some will be more helpful to you in particular, depending on what state you're in and what strategy you're pursuing.

Every turn, every player ends up watching this card row like a greedy man eyeing up the conveyor in a sushi restaurant. Something you really want appears at the far end. You could grab it now, but it'll waste all your actions and you'll look a fool. So you watch it move down slowly toward you, hoping, praying that none of the other diners grabs it first. Wondering when the time is right to snatch the morsel into the safety of your hand. Howling with impotent rage when your arch rival grabs it and stuffs it into their gullet the very moment before you were ready to claim it.

It's agonising, yet exquisite.

Our second success comes from the simple sense of narrative the game generates. There's plenty of numbers to crunch along the way, but they're dressed in the most glorious trappings of history. You can build the Pyramids, elect Napoleon as their leader, and ride his military prowess into victory on a sea of tanks and jet fighters. You can produce Homer, and St Peter's and Bach and Michelangelo and win with your dizzying cultural repertoire. Every game tells the history of the world in a new, unique, and sometimes quite ridiculous way.

Trumping the lot, though, is the military system. It's such a gem because it absolutely should not work without a map, yet it does. Players build units with their resources just like buildings. Each turn they get a random selection of military cards which can have a variety of effects. Some let you seed future events to benefit your culture. Others are tactics cards which give you bonus troops strength for fielding certain combinations of units. The most interesting is aggression cards, which see you comparing strength with a neighbour to damage them and benefit you.

These are not foregone conclusions. You can also draw bonus defence cards to play at the last minute to stave off an attack. It's a simple system yet it works brilliantly. A powerful military is very useful, but a limited number of aggression cards means it can't dominate the game. There's plenty of interaction and vicious trash talking, but plenty of considered strategy too. It's great.

Eagle-eyed readers will have spotted the "new" in the title of the game and may be aware that this is effectively a second edition. It's the military system which has seen the most tweaks. By far the biggest change is that tactics cards are now universal: once played, any player can adopt them. It stops they occasional game where one player could hog all the best tactics and troops cards and just crush their enemies unopposed. The tradeoff is that there's now slightly less aggression in the game.

Personally, I think that's a bad thing. But it's minor, and I'll still take this version over its older sibling for a wealth of other reasons. Chief amongst them is a slew of tiny, but significant changes to the rules and card selection to streamline play and remove less useful options. Now, almost everything on the card row is a new chainsaw to toss into the air, a new piece of salmon nigri to salivate over. It's a glorious thing to see, especially with spanking new card art, too.

Whether you will ever get to see it is a moot point. The game is playable in an evening but will take a four-hour time slot. And it has so many tiny components that it ought to come with a pair of tweezers for each player. Thankfully, if this isn't an option for you, you can play online to your heart's content at boardgaming-online.com. And you should get a copy, and you should play. Because Through the Ages is one of the few games good enough to play again and again, and to last you through the ages.

May 02, 2019
Rating
5.0
Through the Ages
Fiddly when played in real life but my, what a brilliant mash-up of optimisation and one-upmanship against fellow players. The conveyor belt of cards cranks up the tension on every turn, as well as ensuring you can never rest on a static approach to strategy.
MT
Matt Thrower #1 Reviewer 286 reviews