Space Base Board Game Review 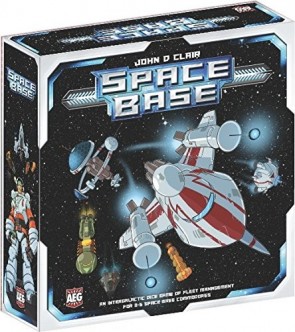 Many games try to keep players engaged when it's not their turn, but few truly succeed. Space Base, however, puts its intergalactic space credits where its O-ring is and makes for one of the best "I roll, everyone gets stuff" games out there. Step aside, Machi Koro; the adults are talking.

With just two dice, Space Base manages to give every player at the table - active or inactive - something to do. You can take the sum of the dice just rolled and activate the corresponding card or take the values separately, activating two cards. As the active player, your stationed rewards (i.e., cards on your board) fire off whereas inactive players reap their deployed rewards (i.e., cards tucked upside-down under your board). And man, those inactive rewards can be massive. Buying new cards pushes your stationed cards to deployed, building bigger and bigger gains. That is, of course, if your numbers hit.

How you build your board is a non-stop tug between the angel on your shoulder reminding you of dice probabilities and the devil telling you to throw caution to the wind. Obviously, building across sectors ensures you get a reward no matter what numbers are rolled. However, cards with lower odds come with more enticing payouts. Building up the tail end of your board means you get the unofficial bonus of seeing your opponents' faces drop every time they roll 12s and your cash machine makes it rain. Moments like these are what makes Space Base the only game to be arguably more fun when it's not your turn - something only enhanced with more players.

The primary way you add new cards to your board is by buying them. The decision of what card to buy is not simply limited to higher cost cards being better, but also the abilities they provide and the sector (i.e., number slot) they go in. Some cards provide you with the ability to trigger other cards next to it, allowing you clever ways to build combos. You may have rolled a 10, but it activates your 11, which also activates your 12. Other cards let you set the dice or reroll them, the latter being especially important when you just rolled something that will be a huge boon to an opponent. The satisfaction of building is not to be underestimated. There's a simple joy in pushing those cards off your board and the excitement that comes at every roll of the dice. This is something that continues through the end of the game, rather than following a predictable build-up-money-then-switch-to-points arc. Space Base gives you more to consider based on one important rule: after buying a card, all of your money is spent. You could have 20 space bucks, buy a 2-cost card, and your money plummets to zero. Sorry. Intergalactic federation rules. or something.

This is where the income track comes in. Although your money is depleted after a purchase, it will reset to your income track value. For example, if you push your income up to 5 then your next turn will start with at least 5 credits. Maybe 10. Or even 20. Having this much money may seem absurd given that cards never cost more than 14 credits, but this is where colonies come in. Colonies cost from 9 to 42 credits and earn you instant points, moving you closer to the goal of 40 points to win. However, purchasing a colony causes the corresponding sector to be forever locked down, never receiving active rewards again. This is yet another one of Space Base's tiny decisions that keeps you concerned with what others are doing and fighting to make your board more impressive.

Outside of colonies, there are plenty of cards that have rockets on them that earn you points when activated. Again, Space Base doesn't follow the same choreographed dance between money and points we're used to seeing. More money gets you more cards; more income gives you more money; and more rockets means more points. Everything is good, but not everything will work. There is no obvious time as to when you should buy a new card or wait for a colony instead. It's entirely possible to focus on rockets from the beginning and shoot your way into victory without ever buying a colony. The cliché of "multiple paths to victory" quickly comes to mind here, but that's an unfairly generic way of describing Space Base. Rather, the game is more like a Choose Your Own Adventure, which unfortunately means sometimes you hit a dead-end.

Poor dice rolls or lackluster cards can stymy your progression, but Space Base never makes you feel bad about it. Each dice roll is a nugget of hope even if you think you're out of the running. Every game of Space Base makes you want to do better. Not bad for a game with only two dice.

I've always wondered why more games didn't do something different and interesting with Catan's base dice-roll mechanic. Seems like we finally have a contender

Josh Look replied the topic: #276907 05 Jul 2018 07:17
I own this and while I’ve only played it a few times, I’ve mostly enjoyed it. If you’re at all the kind of person who likes engine building, or even if you think you should be but are let down by how most engine building games play it, Space Base is worth a look. It’s mostly accessible, fast paced, and doesn’t end as soon as you feel like you’re finally getting somewhere (something far too many engine building games are guilty of).

My one knock against the game is that there’s certain cards that use charges, and the iconography is somewhat confusing on them. The reason I bring this up is that this game could have a huge audience well outside the scope of hobby gamers. It’s so close, but here’s this one clunky thing that makes explaining the game to non-gamers a little more difficult than it should be and, hell, even I have to check the rules to make sure I know how they work.

SuperflyPete replied the topic: #276918 05 Jul 2018 12:14
I hated it because of the constant moving of cards on your tableaux and always having to remember the arrows and symbols.

I’m sure it’s fun for some, I am simply not one of them.

ubarose replied the topic: #276933 05 Jul 2018 16:03
I like Machi Koro. So it's worth giving this a try. Although the reason that I like Machi Koro is that it's a super simple filler that anyone can learn in a couple of minutes. Sounds like that is not the case with Space Base.

For what it's worth, I hated Machi Koro. I don't find the iconography in Space Base too bad. I play a lot of games with my parents, but usually simpler stuff. They picked up Space Base pretty quickly.

ecargo wrote: Thanks all!

For what it's worth, I hated Machi Koro. I don't find the iconography in Space Base too bad. I play a lot of games with my parents, but usually simpler stuff. They picked up Space Base pretty quickly.

I detest Machi Koro. I even went to far as to buy the harbour expansion since It is supposed to improve it drastically. They were right, now I only hate Machi Koro.
Read More...