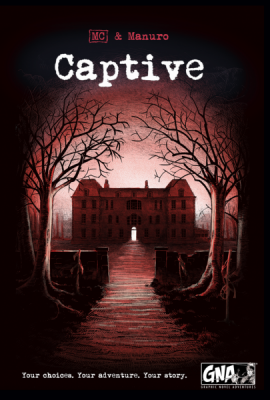 Your daughter has been taken and you've arrived at the Creepy Kidnappers Manor with a bag of money, hoping to save her. After turning just a few pages, you're already immersed in a gripping story that blends everything you love about graphic novels and Choose Your Own Adventure books into one. Captive, the first in the Graphic Novel Adventure series by Van Ryder Games, is an outstanding endeavor.

As far as the game part of Captive goes, the system works like a barebones RPG. You control a nameless character who starts with three basic stats: strength, dexterity, and will. Each stat must have a minimum of five points; then, you distribute an additional five points among the three as you choose. I went for the well-rounded approach, bolstering my strength to 7, dexterity to 6, and will to 7. Like any good RPG, you always wish you put more in a particular stat as the next panel asks for just one more stat than you currently have. Though the character creation pales in comparison to something like Legacy of Dragonholt (or, you know, an actual RPG), these starting decisions are enough to make you feel like you have some agency in the story.

Adding to these choices is your inventory, which can only contain three items. These items come into play throughout the story and influence what decisions you can make. Of course, you never know what is going to be useful or worth keeping. I carried around insecticide for a good while, then discarded it, deeming it unnecessary. Minutes later, I was regretting that decision and wondering what could have been.

As you wander through the labyrinth of a house that is the story's setting, you can find new items by keenly paying attention to numbers drawn onto objects in the room. For anyone who has played any of the Unlock! series of games, this will sound very familiar. What this does for the game is propel you into a room that is merely a half-page drawing. I shove the book close to my face, examining every nook and cranny, hoping to find a clue as to what's going on or some useful items to carry with me. The numbers aren't hard to spot, but you do have to look for them. This sense of satisfaction in finding an object is something a text-based story can't provide. There are annexes at the back of the book, linked from objects in the room where you can examine bigger versions of what you found. There are even some small puzzles throughout the story that, depending on your answer, affect which panel you go to next and the outcome of that decision line. You'll also wind up with different results depending on how much time you've spent. Panels with hourglasses on them add to your time, which you keep track of on your character sheet.

Page turn after page turn, you uncover the mystery of what happened to your daughter while also battling to stay alive. Your health starts at 20 and can quickly dwindle as you encounter many unpleasant surprises. Apparently, it's not always a great idea to open every single door in the hallway. You know what they say about curiosity and the cat. And just like those Choose Your Own Adventure books from childhood, it is possible to die. However, you can't just hold onto the previous page and choose another option like you did when you were a kid. It's hard to retrace your steps as the choices along the way are much smaller. If you wanted to ruin the fun, you could write down each panel that lead you to each decision, but that's not what Captive is about.

Reminiscent of T.I.M.E Stories, the point of Captive is to play and replay the story. Think of it like replaying a level in a video game: you run, fight, die, and repeat, making different decisions and avoiding the same mistakes each play-through. Of course, you can't forget the information you learned from one run to another, but Captive doesn't want you to. Slowly, you start to see each piece come into focus. This does mean it can be a bit tedious to have to repeat the same task or remember which door to not open. However, there is plenty in the book to explore. It took me several tries to successfully complete the story, with each attempt varying enough to keep me interested. The number of pathways contained in just under 300 panels is mindbogglingly impressive and you won't even necessarily see it all, even after multiple plays and a successful ending.

Captive provided me the exact experience I was hoping for: a graphic novel that lets you make decisions about the story. I’ve been enjoying the trend toward games as narrative stories and Captive is a fantastic addition to this new wave. My character sheets are printed and pencil is sharpened. Bring on the rest of the series.