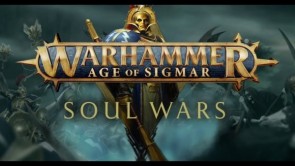 What the Necroquake hath wrought...

Nag-ash the God of Death is patient. He bore Sigmar's betrayal and the disrespect of the Chaos gods. He reassembled his fractured soul over thousands of years. He laid his plans, wove his webs, and schemed his schemes for millennia. He raised his armies and then...in his moment of triumph it was nearly undone. It wasn't a total loss; the Necroquake raised billions of souls to his service but it did not go completely as planned. The God of Death is patient, but now he's pissed.

Age of Sigmar is entering its second edition and to commemorate this event, the loremasters at Games Workshop pissed off the god of death, unleashed an ethereal army of Nighthaunts across every realm, and sent them to siege the city of Glymmsforge. Even this siege required aggressive planning and the corruption of one of the city heroes, who now rides for Nagash as the Knight of Shrouds included in the box. I've been impressed with GW's commitment to lore and narrative since my first game of 40k last year. Soul Wars is no different.

I'll touch in the ridiculous miniatures in a moment, but what stood out the most with this release is the attention to detail throughout the entire Soul Wars experience. The experience starts with sliding off the slipcover to reveal a large painting of the Battle for Glymmsforge. It continues as you unpack the miniatures - in their own art covered box - and books, then read the story and lore created to provide context to these miniatures. It culminates in a battle of dynamic grey plastic, but by the time you've gotten there Soul Wars has invested you in the fate of the realms.

Like last year's Dark Imperium, Soul Wars is a fantastic entry point to anyone looking to dip their toes into the shallow end of a very deep lake. The full hardcover Core Rulebook is included. In addition to primary rules - now 8 pages - there are various battleplans and game modes. A particular highlight is the small campaign flowchart. It walks players through a few included scenarios and describes how to string them together as a campaign. For me, 40k shines when played with narrative scenarios through a campaign so I was excited to see this laid out so clearly for new players.

As a new Age of Sigmar player, I can't compare this new edition to the original one. I have played quite a bit 40k and think I may prefer the general flow of Age of Sigmar. Overwatch does not exist, making charging less risky. In exchange, units that charge do not necessarily punch first in combat. Every round of melee is a series of tense alternating decisions. I don't typically love I Go You Go game systems, so this pocket of alternating activations tucked into the broader turn structure is excellent. It also makes my Idoneth Deepkin - one of the other Age of Sigmar factions - feel particularly powerful when they leverage their ability to attack first in the 3rd battle phase.

In fact, their abilities also highlight Games Workshop's ability to reinforce their rich narrative with faction mechanics. The Deepkin emerge from the depths riding the Ethersea into battle. Each round they gain an army-wide bonus. Early in the game these abilities aid in closing with the enemy so that in Turn 3 they attack all at once, in force. Later rounds aid in retreat before the cycle begins again. These bonuses evoke the surging crush of a wave that rushes in before slamming the shore, only to recede and repeat again. However, the Deepkin are not in this box so let's get back to the Soul Wars.

The Battle for Glymmsforge is told in a separate booklet that comes in at 32 pages. The history between Sigmar and Nagash is sketched out before laying out the betrayal that leads to this battle. Each unit in the box gets a page describing who they are and their role in the army which helps ground the tactical gameplay. It's nice to have something more than a warscroll to lean on when make your first tactical decisions. It also wraps the battle in rich story. There's more in this book than most board games have in their entirety.

The battle pits roughly 800 points of Nighthaunt spirits against a new Stormhost of Sigmar's Anvil-forged champions. The Stormcast have more points on the table, but the Nighthaunt feature a number of heroes with powerful area effects. Successful play with the Nagash's legion requires leveraging these area bonuses to empower your relatively weak units. Their ethereal nature is represented in movement. All of these new ghosts can pass through terrain thanks to their fly rule, and their save rolls are never modified. Neither cover nor armor-rending swords mean anything to a ghostly spirit.

The Stormcast on the other hand, are a stoic band of soldiers. They're tough to take off the table and feature two wizards and two powerful ranged units. The Ballista can tear through the enemy thanks to a chain lightning ability. My favorite moments with Sigmar's champions come from the 2 heroes that stride to battle. Both carry a number of Spirit Flasks on their hip that can be shattered before combat begins to deal wounds to all units in the area, including themselves. Wiping out 3 units of enemies in a sacrifice that recommits your own soul to Sigmar is particularly satisfying.

Games Workshop has rightly recognized that a luxury product needs a luxury experience and they've invested accordingly. This box is not only packed with the quality miniatures you can expect from Citadel, it's packed with the story and energy that make GW's games so exciting. Soul Wars builds on Dark Imperium's model. If Age of Sigmar 2.0 builds similarly on the success of 40k's 8th Edition then we're in for a fantastic fantasy game.

Raf Cordero tripped over a SmallWorld box about 3 years ago and fell face first into a pile of Netrunner cards. He discovered a world of cardboard and plastic that he hasn't had any desire to leave yet. When he isn't gaming, he's hanging out with his wife and newborn son in the vast suburbs of Chicago. His other hobbies include homebrewing and watching his Blue Devils play all the various sports he was terrible at as a kid. You can hear his musings on games at www.dinganddentcast.com.