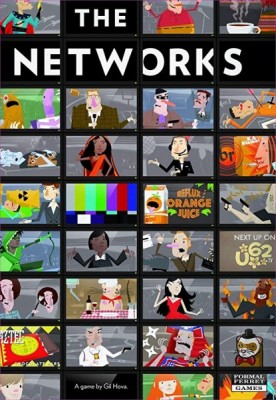 Andrew: Games are sometimes derided for focusing too much on power fantasies, with players often assuming the roles of dangerous warriors or brilliant battlefield commanders with the ability to shape a world through their actions. In other words, people much different than us normal folk. The Networks takes a particularly modern approach to this sort of wish fulfillment. It casts players as stogie-chomping TV executives battling for cable supremacy by competing for shows, stars, and the ad money that fuels it all. The Networks both embraces and skewers the era of TV dominance, offering its own satirical take on the entertainment biz in competitive card-buying form.

When I first opened the box, I couldn't stop smiling. Before I even played the game, I was pretty well charmed by the game's art and humor, which gently pokes fun at our cultural mainstays. There are a lot of games that are supposed to be funny, but it's pretty rare to play one that actually makes me laugh out loud. Matt, what did you think of the game's style?

Matt: You don't even need to open the box. I'm British, born and raised on British TV where public service broadcasting encompasses almost the whole of television. Yet I could still recognize and enjoy the Bob Ross pastiche on the cover. Fortunately, I also got hold of the mini-expansion "Telly Time". This replaces all the parodies in the original box with British versions. When I thumbed through the cards, "Alien Baby Cult" almost reduced me to hysterics. And when I played, everyone had a great time guessing and enjoying what shows were being skewered.

And it made me think: why do games, generally, not do comedy at all, or do it badly? Sure there are a thousand stinky party games festooning the shelf at your local game store that we're supposed to find "funny". But that puts the responsibility on the players. The Networks makes me wonder why designers don't aim for it more. I've seen Gil be a little reticent on what shows the game is parodying, presumably for fear of legal action. Maybe that's a contributory factor. But it's not an excuse. Still, a game can't stand on its comedy alone. How did it play for you?

Andrew: The short answer is that it played okay. The marketplace that powers the game can create a real rush, especially when a season begins and all the new cards are unveiled. The game is at its best in those moments, when the players are mentally scrambling to figure out how to get what they need and keep their opponents from snatching up a particularly valuable star or hot new show. This tension really sizzles in the first few turns, and I found myself tensing up and struggling to act cool when my opponent's hand was hovering over a card I absolutely had to have. Unfortunately, this excitement tends to diminish quickly after the first few rounds of buying. This is especially true after all but one player has passed--that one player is free to take as many actions as they want and math out their options, while the other players tend to drift toward their cell phones, which in this sort of game is death.

I think the main issue is that, while the central mechanics of the game are engaging and the theme is refreshing, it all feels a little solitary. It's hilarious that I'm able to convince a celebrity chef to star in my garbage science fiction reboot, but instead of this being a shared moment, I end up chuckling to myself while everyone else's head is down working on their own little puzzle. I admit I haven't yet played with the "interactive" deck that's supposed to encourage more interplay, but after flipping through the cards I'm not sure they'll fix this particular aspect for me. What did you think?

Matt: I agree that the lack of interaction is a missed opportunity. The Networks picks a pretty unusual theme, and portrays it well. It's great to see your line-up coming together, changing, bringing in viewers. And, again, the fact a lot of the cards are parodies help it come to life in your head because you can imagine the original shows and stars behind the cards. But - as far as I know - often, getting real-world TV made is a bit of a bidding war. Adding in some of that would have made for more head to head moments.

Having said that, interaction can take many forms. And here, it's possible to keep a close eye on other players and try to deny them what they need. For example, you might see someone has an ailing show in their 9pm line-up, and there's only one 9pm card available. These moments are common, and are powerful tension generators. Is someone going to grab that card, whether they need it or not, just for screwage? Each turn while it stays on the line ratchets up the crank.

Timing is everything in this game. Trying to plan stuff, pick it in the right order and do so in the minimum amount of actions so you can "pass" for the biggest bonus. And that means that, while it might lack in interaction, it certainly doesn't lack for excitement.

Andrew: It's true, keeping a keen eye on the other players' goings on can give you a real advantage, so there is a good reason to stay engaged. It's just that for a game with an accessible theme and friendly style, The Networks requires a surprising amount of mental bandwidth. This is especially true as the game progresses and you have to juggle more information and work out increasingly complex problems. Is it time to ditch my 10pm show, even if I'm about to get a spike in viewers? Should I stop trying to collect sitcoms and start diversifying my lineup? Why the hell did the person to my left sign that actor--do they see something I don't? Keeping abreast with everyone else's choices while maximizing your own can fizzle the brain.

It's all compelling stuff, though, and I stayed invested in my fledgling station (and its beautifully stupid action shows) to the end. Like you mention, I do wish the game leaned a bit more into the cutthroat elements I associate with the TV industry. An auction or bidding mechanic would have gone a long way toward moving the game from being more of a math-based puzzle to a people-based puzzle. As it is, the game is solid and fun, but it's the theme that really makes The Networks stand out from the other games on my shelf. I do wonder if it will hold the same appeal once the novelty of the cards wears off. I'm quite enjoying the game now, but I'm not sure how often I'll be bringing it to the table in the future.

Matt: You're right, but oddly that mathiness can help to extend its longevity in one important area: it solos well. Solitaire play isn't for everyone, but it's included in The Networks and it works pretty well. Although it's an optimisation puzzle, what keeps it ticking over is the threat of having shows, stars or other resources removed at random as you play. The goals it sets are difficult, and the uncertainty of what'll be available means you can never stick to a tried and tested approach to the puzzle. It's a lot more exciting to solo than most of these beat-your-best kind of point generation games.

The more I think about The Networks  the more I feel it's more of an economic or resource management game. And it does well in that comparison, being both more engaging and entertaining than the dusty academia of its peers. They don't let you hire Bob Ross to appear in the Alien Baby Cult, with an ad break for Crazy Pete's Discount Plutonium. And if you want to count beans, there are few more fun ways to do it than that.

fightcitymayor replied the topic: #278345 25 Jul 2018 09:12
Big fan of The Networks! Gil spent a lot of time developing this one & it shows. Game is really super tight, and whoever used the word "compelling" is spot on. It starts out easy enough, with a lot of options, but then as the rounds go by, and your TV schedule fills in, the options start wrapping your brain a little closer each time. But it's not a "heavy" game at all, it just really grabs you and holds your interest. And the solitary-friendly aspect is (IMHO) a big plus, as is how well the game scales. But you are correct, it is not a cutthroat exercise. Which might also be why it is also on my All Time Top 10 list for wives-and-girlfriends games.

Ken B. replied the topic: #278571 27 Jul 2018 17:11
Great game, solid humor, surprisingly thematic despite at its core being a drafting/timing game. Putting Sean Bean in a police drama where you have to choose whether he dies in the first season or builds up to it in a later season...that's just gold, baby. And it does this without flavor text, somehow. And still makes you laugh.
Read More...