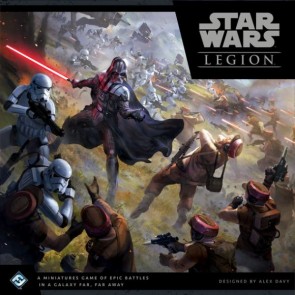 When I arrive, my host has set up both armies on his big white tabletop. He's never done painting or modelling before but, fired with enthusiasm for universes far, far away, he's set to work to learn. The results are impressive. Looking up close shows the sculpts are average, the plastic soft and rubbery. But en masse, the spectacle drowns out the detail in a sea of glorious colour. The speeder bikes are particularly good.

As I sit, examining his handiwork, he picks up the quickstart rules and begins to read aloud. I realise, with mounting horror, that he hasn't actually read them. We're going to learn this complex game together, from scratch. I almost scream and make a break from the car, but British politeness keeps me in my seat.

It starts out with a little card game. We each have a hand of cards with an initiative value and an order value. The former determine who goes first and the latter how many units we can be certain to activate. The remainder all get to act, but they'll do so in a random order. We each choose one and play it blind.

The possibilities of this jolt me awake like a shot of coffee. At a stroke, it solves the problem of games hinging on who gets to activate the next unit to attack. Instead, it leaves you balancing on a teetering see-saw of how much you'll risk initiative to organise your forces. This being the first turn I go cautious, choosing a two-two "push" card. My enemy, thankfully, chooses "ambush" at one-one, so he goes first. He'll have to work out the movement rules for himself.

To my amazement, they take seconds to explain. This being an FFG game there's custom movement rulers as well as custom dice and they make it smooth and easy to manoeuvre any unit. There's almost none of the clumsy checking that comes as baggage with every other miniatures game. When a unit activates, it gets two actions. So Darth Vader comes rushing out into the middle of the field and assumes a defensive posture. Each side has staggered activations, so now it's my turn to activate a unit. Obviously, I decided to fire everything I've got at him.

To my further amazement, there is no rule to stop me doing this. A squad of my rebel troopers takes an aim action to give them a hit bonus and fires. And although Darth takes some damage, the value of his defence token becomes clear as he spends it on the classic Jedi trick. Energy bolts get reflected back at my poor Rebels, causing carnage.

The game unfolds. At each step, as the rules drone on, I'm expecting to hit a complexity wall. But it doesn't come. We're actually playing and learning Star Wars: Legion direct from the rulebook. Cover removes damage from incoming fire: simple and powerful. So the fast speeder bikes swish around my flank to attack my squads cowering behind their defences. Luke, meanwhile, accompanied by my walker, causes havoc among the Stormtroopers. Luke with his lightsabre and the AT-RT with its laser cannon.

As our initial orders wear off, we notice a problem. We're playing with the core set which, again in typical FFG style, doesn't have enough dice. Worse, though, there aren't enough units to really make use of the random activation rule. You can see its potential, fizzing away, but with such small armies, it barely matters. On the plus side, it's nice to have some scenery in the starter box, but I'd gladly swap it for some more soldiers.

Three turns in the importance of those initiative cards becomes clear. The battlefield is a freeze-frame, Luke about to charge down some more Stormtroopers, his father poised to intercept him. If I don't act first, the Stormtroopers will get away. But if I can't order my AT-RT second, Imperial bikes will make a mess of my remaining infantry. Choosing the card feels like being sat on by a Bantha. I chicken out and play my own "ambush", activating Luke first.

As the infantry on both sides goes down like ninepins, Darth dashes back to deal with his son. In a flurry of black dice, the dark lord wins. Now we are at an impasse. My walker was the "armour" keyword which protects it from non-critical hits. To get around this, some weapons have the "impact" key which negates it, but there's nothing left on the imperial side.

Except for Darth, that is, with his laser sword. In a tense finale, he creeps across the table under huge laser fire, batting bolts back and forth. With a single wound remaining he cuts the legs out from under the walker, and with it any hope of my victory.

I can't quite decide which is more exciting, the play of the game or the fact it was so smooth we could play it right out of the quickstart rules. As I stagger to my car, dizzy with possibilities, my opponent warns me that the "full" rules are much bigger and don't actually come in the box. You have to print them yourselves.

Nevertheless, first thing the next morning, I'm out securing my own copy and a bunch of Rebel expansion units. More infantry, another walker, an Airspeeder.

This is enough to make a full army list. But as the units build up, so does my concern. There are icons to match, slots to fill. It feels worryingly like X-Wing just before the sheer weight of expansion options propelled it over the shark. The rock-paper-scissors nature of the mechanics makes it simple, but also brittle. It seems inevitable that future expansions cannot diversify without causing significant bloat.

Such alarms are for the future, though. Right now, I have a loss to avenge.

The full game adds two things of note that we had missed. The first is another mini-card game which, again, adds brilliant value to the miniatures. Before play, you deal some random cards for objectives, environment and setup, and players take a turn discarding ones they don't want. Whatever's left shapes the battle. Again, a simple solution to an intractable problem, giving you huge variety while keeping a bit of strategy.

The second is the suppression rules. But as the laser fire blasts back and forth across the table, they begin to annoy. They result in a lot of bookkeeping for too little effect, the tiny piles of suppression counters being easy to remove. After a few turns, we get lazy, begin to forget to add and remove them when we're supposed to. It doesn't seem to make a whole lot of difference, although it feels like it might if you play for it as a strategy. I make a mental note to try it out next game and see.

On some foggy planet, perhaps Dagobah, we fight over a scattered supply stash. The lists are bigger, but knowing the rules the action unfolds at breakneck speed. Infantry dash forward under the cover of the mist to secure objectives and try to hold them in the face of lightsabre wielding heroes. War machines stumble about in the mire, my walkers hampered by lack of visibility but the grav vehicles on both sides proving invaluable. Until Luke chops the vane of a speeder bike, in what feels like a frame for frame replay of Return of the Jedi.

It feels like the game I always wanted Imperial Assault to be. Fast and ferocious, challenging and cinematic. As the mist rises, I am avenged. The Rebels limp away, in the face of the Imperial onslaught with more supplies and the win. I limp away wondering whether, in the face of the onslaught of expansions, how long Star Wars: Legion will get to stay as good as it is.

If you'd like a more traditional approach to a review for Star Wars: Legion, I wrote one for wargamer.com.

July 27, 2018
Rating
4.0
Star Wars: Legion
Combining the best of card and miniature gaming, Legion also combines fast, easy gameplay with a wealth of tactical choices. Shame you only get half the game in the box.
MT
Matt Thrower #1 Reviewer 286 reviews

san il defanso replied the topic: #278708 30 Jul 2018 00:12
I have no intention of burdening my shelf with this game, because as good as it seems I know it would not get played. But it does sound like a definite improvement over Imperial Assault from a tactical standpoint. I always wanted Imperial Assault to embrace the more narrative elements of the game more fully, and it never really did.

I sometimes wonder how much FFG plans out the long-term expansion strategy for these games, because they seem to become bloated in just a couple of waves. Am I imagining that other serialized properties are able to pace expansion a little better?

san il defanso wrote: I sometimes wonder how much FFG plans out the long-term expansion strategy for these games, because they seem to become bloated in just a couple of waves. Am I imagining that other serialized properties are able to pace expansion a little better?

Maybe. It's not just about pace, though, but about overhead. Other properties certainly seem to be better at diversifying by leveraging existing rules and effects, whereas FFG's default position seems to be to add more. Either way - pace or overhead - it's likely this is ultimately about milking a cash cow as fast and hard as possible. After all, it's worked for them so far.

But I think I like Legion best of all the Star Wars miniatures games they've put out so far. So I'm hoping, against hope, they've learned their lesson this time.