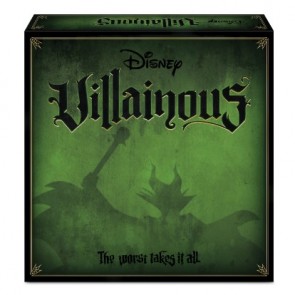 When you wish upon a star...

I'm showing this beautiful green, black and gold box to a friend who is a big Disneyphile (but not a game player) and he says to me "are you sure this is real and not like some kind of fan thing?" I assure him that Villainous is legitimate, published by Wonder Forge/Ravensburger and soon to be widely available. But as I'm holding it, I start to wonder if this chimera of a game actually exists.

It feels like the impossible game; a fully licensed, seriously designed asymmetrical Disney board game where two to six players slip into the roles of iconic villains like Maleficent and Captain Hook. Who greenlighted this wonderful thing, the first "real" Disney board game ever made, anyway? I keep thinking that someone in the Disney licensing division is going to knock on my door to take it away, stating that it was never intended to be seen by the public. Or that I'll go to my game shelf and it will be gone without a trace, having returned to the alternate reality it seems to have slipped out of into our mundane world.

Villainous is a brilliant, beautiful game. It's also singular, innovative and uniquely compelling in that it leverages IP that we have never had an opportunity to play with in this capacity. Make no mistake, if you are a fan of the House of Mouse's timeless versions of Sleeping Beauty, Peter Pan, Aladdin, The Little Mermaid, Alice in Wonderland or ROBIN HOOD (yes, ROBIN HOOD) then this game will delight and enchant you in ways that nothing on your tabletop ever has. If you are one of the philistines that doesn't appreciate that Disney Magic is real, then you are still going to find one of 2018's best-designed and best-produced games.

The concept alone is simply stunning. Each player's villain gets their own four location board as well as a unique deck of cards that they will use to accomplish their specific goal. The locations have four icons corresponding to the actions you may take if you move to that spot on your turn- collecting Power, playing cards from your hand (which may include Allies, Items, or other assets), executing a strategic redraw, or performing a Fate action. You see, each villain has their own Fate deck, filled with characters and elements from their stories. Other players use their fate actions to play Heroes and other obstructions out of your Fate deck to prevent your baddie from bringing their nefarious plans to fruition. These also block half of the icons on a location, reducing your capabilities until you can bring one of your henchmen to bear to defeat them.

The array of characters is dazzling- Flora, Fauna and Merriweather. Friar Tuck and Little John. Abu and the Sultan. Flounder and Sebastien. The Lost Boys and Mr. Smee. And of course Ariel, Alice, Aurora, Jasmine, Tinkerbell, and MAID MARIAN (yes, MAID MARIAN!). And the situations that come up will have you smiling- so much of what goes on in this game is straight from the stories, and I think it was a smart but certainly challenging design decision to keep each character and element within their setting. You won't have Prince Eric heading to Agraba or anything like that. The result is that each villain has a unique arc, essentially playing a separate instance of the game with different mechanics and agendas. It is a siloed approach, but the take-that element of Fate play steers it clear of the dreaded "multiplayer solitaire" demerit. For example, Maleficient must fill her four locations with curses to win. However, these curses are removed when certain things happen, including when Heroes are played to corresponding locations.

I'm totally blown away by how thoughtful and well-considered the objectives are. Some are more complex, but the simpler ones are balanced by making them either more time-consuming or difficult to achieve. Prince John just wants to accrue a lot of power, but the pacing of his deck and functions is such that by the time the Queen of Hearts has played enough Card Guards and turned them into wickets so that she can play Take the Shot and make a draw for the win, it's going to be a fairly close game if the players have played at least semi-competently and understand the basic strategies of their character. A small strategy and card guide is provided for every villain so that you can hand those out at the outset of the game. I love that, and it increases the accessibility of a design that might otherwise be considered too complex for mass market.

The depth is unexpected, but the weight remains squarely at the family game level. I've been playing Villainous quite a bit with my almost-seven and eight year old, and they have been able to grasp the strategies and combinations of effects. Granted, playing with my more experienced game group has resulted in more challenging and competitive sessions, but I think it really speaks to the quality of the design that it can be played by children and serious game players alike and everyone walks away smiling.

It also doesn't hurt that the game is one of the best looking games I have ever seen. The illustrations - every single one new and unique to this game - are just amazing. I'm not too proud to admit that I actually got a little teary-eyed seeing the ROBIN HOOD (yes, ROBIN HOOD!) characters illustrated in a style that completely honors their vintage while embracing modernity. Each player board folds out and has a quote from the villain on the overleaf. All of the cards have a light, subtle foiling so they shimmer in the light. The movers are lovely, iconic abstractions rendered in translucent, luminous acrylic. The only miss is the flimsy cauldron and the rather plain Power tokens. If there is ever a deluxe edition with those pieces upgraded, sign me up.

You can go ahead and put me down for any and all expansions. If you fall in love with this game like I have and you love Disney, it will take you about two seconds to come up with a list of things you want in an expansion. First on my list is Scar, followed closely by Gaston. If Wonder Forge/Ravensburger doesn't do it, I'm sure someone out there will. Maybe I will.

So far, Villainous is my favorite game of 2018 but I still can't quite believe that it's real. I've just always assumed that there'd never be a Disney game like this, that my interests there and on the tabletop would never meet. But here it is, sitting on my desk beside me and away from all of the other games like a precious treasure.

Sure would like to see some photos of this in the meantime.

Sagrilarus wrote: Is this coming out in Target, Walmart, et al., or via the hobby channel?

Sure would like to see some photos of this in the meantime.

It's at Target. Not sure about Wal Mart

It's a bit too medium weight for that kind of casual pick up and play.

But I like it a lot. The female spawnling I bought it for enjoys it, but she is really good at grokking abstract concepts on an intuitive level.

The GF... Not so much despite the theme. She was playing Ursula though, and she's a bit obtuse. I played queen of hearts and spawnling malificent.

I think this is a very good mainstream game, if not one of the best to be seen in the likes of target in a long time.

Just meaty enough to satisfy a game, but light enough to entice casual players to delve a bit deeper and explore it.

blatz replied the topic: #279710 13 Aug 2018 23:13
My family and I adore this game. One thing I thought of today is how the components lend themselves to multiple games being played simultaneously. Don't want to play with 6 players? Play two 3-player games instead!

SuperflyTNT wrote: I think I’d have preferred to hear this from a Disney agnostic.

Is that someone who takes no position on whether or not Walt is cryogenically preserved under Anaheim?

blatz wrote: My family and I adore this game. One thing I thought of today is how the components lend themselves to multiple games being played simultaneously. Don't want to play with 6 players? Play two 3-player games instead!

I totally support this way of playing with 6. We did this last time, two games simultaneously...definitely better than 6. I’d say 2-4 is really optima.

SuperflyTNT wrote: I think I’d have preferred to hear this from a Disney agnostic.

Is that someone who takes no position on whether or not Walt is cryogenically preserved under Anaheim?

No, I meant someone who took acid and watched a few Disney films, then realized that ol' Walt was a fan of hallucinogens and made movies that APPEAR to be kids' movies but are in fact geared 100% towards adults who have been consuming hallucinogens.