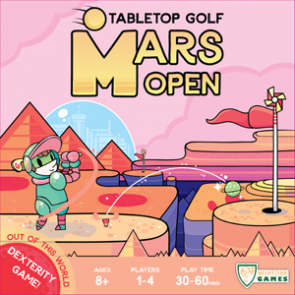 Among the games, one stands out with its garish pink box and cheap cartoon art. I pick it up, see that it's a tabletop golf game and images of cheap executive toys flit across my brain. I put Mars Open: Tabletop Golf to one side. There are far more interesting, and interestingly coloured, games in this selection to look at.

Next day I come home from work and find the house is empty. For a few moments, I wander the silent rooms, lost as to what to do with this unexpected freedom. A flash of pink catches my eye. Why not? I'm going to have to get to it sooner or later. Might as well be now.

A half hour later, my wife and kids come home and wonder what the hell is going on. Loud music is playing. There's a beer cap on the kitchen sideboard. So they come into the dining room and find me lining up a fade shot to twist past the mountains of Mars, over the jetpacking golfer and into the hole. It not only misses but sails off the table in a graceful arc of failure. I stand up, groan, and notice I'm no longer alone.

Immediately, everyone wants to play. So I shift things around, back to the first hole out of the forty-odd in the rulebook. The box which, with insert, serves as the hole. The "tee", a cardboard angle that denotes the area from which you can start flicking. And a cardboard obstacle from the several in the game, in this case, a lone mountain.

There are, essentially, no rules beyond those of golf. So instead I introduce everyone to the absolute mechanical marvel that drives this game. It's a square of cardboard, two opposite corners bent up and the other two bent down. It thus rests on three angles, while the fourth sticks up in the air like a chunky tail. This is the ball, and it's quite the most amazing piece of engineering I've seen in a game since Wallenstein's cube tower.

Not knowing much about physics, I can't explain why, but it behaves almost exactly like a golf ball. I demonstrate: you control the length of the shot by the strength of your flick. But, observer, I can get a higher, weaker shot by flicking the tab that sticks up. I can get a longer, lower shot by flicking down toward a corner. You can curve and spin the ball by flicking into the opposite corner, applying light pressure with your other hand for extra bend. Look, like this, I say and pull off the most incredible parabola.

Secretly I wish I could do this actually in play, instead of when demonstrating. But that never happens.

The children try, and at first, they can't do it. Because it is *hard*. The amount of control you can exercise in a shot is incredible, moreso than any dexterity game I've ever played. But that comes at a price, a high but worthwhile price. It's a game of skill, a game that demands imagination and practice.

I let them take a few practice shots and they begin to get the hang of it. So I let them play with a mulligan rule and we get stuck in. And as they improve and as the beer dulls my senses, it becomes a close run thing. But half-way through, we've forgotten the score in the sheer, idiotic glee of flicking geometric balls around pink cartoon obstacles. Elder daughter scores a hole in one and there is jubilation bordering on chaos.

At the weekend, I try to describe the ball to my Dad over the phone. He's fascinated. I've already ascertained from the designer that he invented the shape himself, but I have no idea how. It's such a bizarre, brilliant, counter-intuitive idea that this bundle of angles will soar like a ball. Yet it does. He's fascinated as I am. My parents live a long way away, but I'm due a visit soon. I promise to bring it with me.

Two weeks later, I'm stood over the table in a rented house, watching an 85-year old man attempting to flick a cardboard square into a box lid. His face wears an expression of absolute concentration as he tried to bend his stiff joints to get a good angle of attack. Then to one of complete fascination as he watches how the "ball" spins and curves. Then to one of total annoyance as it clips the side of the box and falls off the table. He forgets himself and swears loudly, and everyone dissolves in hysterics.

We head home, a week and a lot of flicking later. But while everyone has had a great time, Mars Open: Tabletop Golf has begun to wear a little thin for me. The amount of skill and practice it rewards is an unusual boon. But the game itself boils down to using those skills to move around the same series of four obstacles. It's gotten a little repetitive for me.

In an attempt to recapture the magic, I set it up for solo play one night after the kids have gone to bed. To please them we've been playing the basic front and back nine. But there are a lot more holes in the box, which I've barely examined. As I flip the pages and puzzle over the diagrams, my head begins to spin. These don't just use four obstacles and the hole. They use the base and box lid to add platforms and doglegs. They use chairs to create multi-approach holes like crazy golf. They're nuts.

I try and piece together some of the more awkward ones. It's not that straightforward from the pictures. And I'm never quite sure whether I've got the distances and angles right. But as I bend to flick, it occurs to me that it barely matters. All that's important is setting the challenge, and rising to it, and stamping in blind fury as you fall short and the ball drops between chair and table.

As a young man, I toyed with golf as a hobby for a little while. It was a good excuse to get outside, blow off steam, smoke some blunts and compete with friends. And the satisfaction of a sweetly struck golf ball, watching it soar into the sky toward the pin, is immense. But it was a rare joy: i was irredeemably bad at it, no matter how much I practised. My last ever game was on my birthday, and I demanded we give up two holes early to go home and play Magic, the a choice of anti social selfishness that still haunts me today. I only wish i could have known about Mars Open: Tabletop Golf back then. It would have saved me a lot of time, money and angst.

WadeMonnig replied the topic: #280049 19 Aug 2018 21:13
Great review, I was expecting a higher overall score but your explanation shows why. I LOVE games that are about moments and this one looks to provide plenty of those. I'm in.

ChristopherMD replied the topic: #280051 19 Aug 2018 22:34
Thanks for the review. I've been eyeing this game but ultimately passed. I loved miniature golf as a kid and even had free access to a local minigolf for a period. When it comes to minigolf you do get better with practice but you're still just putting all the time and that's it. It gets old.

Most of the initial reactions I've seen have been along the lines of "OMG! This is amazing, get it now!" I was happy to see your review went beyond the initial glee of playing and addressed the long term playability.
Read More...