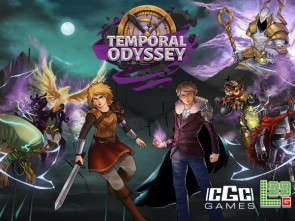 Can Level 99 create CCG like Magic without all the hunting and gathering?

Old Man *pointing out into a field* : You see that Rabbit Hole out there? You never, ever, want to go down there. It's a Collectable Card Game hole, son. If you go down there, why, you might as well just take your wallet and chuck it down there too.
Young Boy: Collectable Card Game? You mean Like Magi...
Old Man: Shush Boy! *looks around warily and checks his wallet* We don't say that name out loud around here.

Have you ever wished something that comes close to being a CCG but without the commitment of time and finances that a CCG demands? That is the vibe that I felt when playing Temporal Odyssey. It is definitely trying to scratch that CCG itch but doing it with an all in one low price proposal. I certainly don't envy Level 99 in that task: Trying to weigh intricacies and playability while assuring proper balancing in gameplay is rough. Doing it without the thrill of adding booster packs or being able to meta-adjust characters or classes requires pinpoint precision. It also made it a real challenge to review. Without going into a boring step-by-step recitation of the rules, I'll try to explain why.
Temporal Odyssey allows you to pick from 6 different time travelers, all with their own asymmetrical powers. But these powers drastically change how you play the game. For instance, Alicia the Medium plays like a fully loaded freight train. She starts slow but if you let her build momentum (by creating summoning circles) she becomes an unstoppable juggernaut of destruction in later rounds. Mr. F, on the other hand, overruns the other player with onslaughts of attacks, crashing like waves on the beach round after round.

My first few games, I played as A13-X. He is a traveler that, I would learn through several painful playthroughs, focuses on Area of Effect attacks. I playing him completely wrong and drafting with him just as badly (more on drafting in a bit). If I would have wrote my review after my initial half dozen plays, I would have been wrong about what this game is capable of. After I switched to playing Alicia, the game opened up to me and my experience changed for the better. At some point, I had to stop myself from analyzing every character and decide: Is this game fun and balanced? I can say that I have had fun with it but I'm not sure how many games I would have to log with each character before I could answer the balanced question.

The drafting mechanism is an intriguing twist. When pulling from either the Past, Present or Future deck, you draw three: keep one, banish one, and put the other face up on the proper pile. This system comes in like a breath of fresh air but the level of randomness can be like the beat of a butterfly's wing turning it into the Hurricane of your destruction. Sometimes I would have the blueprint to build the perfect tactical assault in my mind, but the game kept denying me the parts that I needed. This is slightly reduced in that each of the time zones are logically specialized. Drafting from the future deck will help you build for later rounds, the present deck will usually help you here and now and the past lets you repeat previous actions. In a genre where flow control and optimization is a key factor, it certainly creates a different buzz but I'm not sure it is one that everyone will appreciate.

The goal of the game is to destabilize your opponent's timeline, causing them to be lost in the maelstrom. This has a strong anime vein running though it in that each time you defeat a traveler, they come back stronger because of the abilities on the instability cards. How long it takes to defeat another player can vary wildly. Early games clocked in right at 30 mins. However, the more experienced we became with the game, the longer they would last, almost doubling in time. This is very evident if you have two players who have built up wicked retaliation traps for each other and settle into an uneasy arms race where each is afraid to fire a shot.

When I saw this game, I thought the box read Two TO Four Players. This is not the case; it is Two OR Four Players. I liked the idea of a battle royale with all players involved. Instead, the 4 player version of the game is a weak team based affair that leaves you wishing you would have just played the two player version.

Temporal Odyssey is an entertaining, quick card battle. If talk of stunning and sigils in a card game make your eyes glaze over, it is not going to bring you over to the dark side. But if you are looking for a game with the vibe of Magic without having to fall into that rabbit hole, it does a great job of retaining that CCG feel while adding a fascinating theme and some board game mechanisms.

repoman replied the topic: #280788 30 Aug 2018 17:29
Have you played Ashes: Rise of the Phoenix Born? Your description, outside of the drafting bit, makes the games sound very familiar.

If you have played Ashes, how would you compare the two?