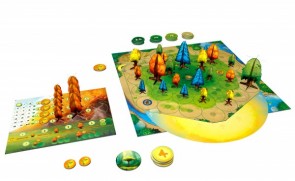 A stunning example of simple rules and (relatively) complex gameplay.

(Editor's Note - our Second Take reviews allow our writers to give you another look at a previously reviewed game. See how Drew's take compares with Matt's!)

As the Euro invasion began in earnest a few decades ago (does that make you feel old, or what?), the designs tended to focus on simple rulesets. The best would use those simple rules, the kind you could easily teach to family and friends, to create a deeper, emergent gameplay. But paradigms change and these kinds of games seem fewer and further between. But Photosynthesis definitely fits the mold.

Rather than easily definable factions or societies, players take on the roles of different species of trees competing for sunlight and, ultimately, the best patches of soil. While it perhaps lacks the excitement of a fantasy duel or cat-and-mouse chase, it surprisingly delivers a strong amount of tension. The game can be brutal as players block your trees from the sun and actively snatch up valuable territory from you. So despite the peaceful trees and the awesome look of the game, you may find yourself cursing opponents.

The hexagonal board has a sun at one end to start. And the rays of sunshine go in one direction. If it hits a tree, that tree generates light points (with bigger trees generating more). But if your tree is blocked or shaded by another tree, then it generates nothing for you. Each turn, the sun moves one space over, changing the direction of light and consequently moving which trees receive sun and which are shaded. After six moves, it's back to its original position. Four of those rounds completes the game.

Photosynthesis is jam-packed with tough and interesting decisions. Placing trees is a critical determination. You want to make sure that you get sun in as many angles as possible. But you also want to block your opponents at critical times. Causing them a light deficit just when they were hoping to grow a big tree or seed a particular plot of land, can be a huge advantage.

The primary tension in the game is between growing trees and getting victory points. Points are gained only when a large tree "completes its lifecycle." In other words, to get points, you need to kill that big tree. That tree that you grew from a tiny seed, and invested in turn after turn, must be removed from the board. You paid a lot of light to get to that point, and it can sometimes be challenging to remove it completely.

But this is a challenging design for another reason. A big tree is the most functional piece in the game. As the tallest tree, it is the hardest to shade. Yet it casts the biggest shadow over others while also generating the most light. So once you get a big tree out, you have more opportunities to control the board, stymie opponents, and gather income. And as soon as you kill it, you may have a few points, but all of those advantages go away. You open a valuable space to an opponent, other players may be unshaded, and you lose all that income on which you had become reliant.

As a result, deciding when and where to kill a tree is a huge decision. There's a great tension between using resource to establish better control of the board, and giving up resources to acquire more points. After all, at game end only the points matter. And if you try to wait and ensure you have a replacement tree ready to go before killing a big tree, you're liable to see opponents swoop in, kill their trees first, and grab the big points. In general, the sooner you kill a tree, the more points you'll receive.

While Photosynthesis produces interesting, tension-filled decisions, it does so in a relatively simple ruleset. Build trees to gain light. Use light to make more trees available and grow them on the board. Kill them to get points. These straightforward concepts can be used to ensure the game is enjoyed by casual gamers as well as hobbyists.

And when you see it on the table, it's a real attention-grabber. It has this 3D quality as the trees emerge from the board. If you play it at a convention or on a park table, you'll inevitably have looky-loos coming to observe. And even for the hobbyist, it's undeniable that it's just a more interesting board to interact with than small chits or tiles.

Photosynthesis isn't a perfect game. For instance, the full four rounds are necessary to get into the most interesting board states and decisions. But four full rounds can also feel just a little long. It's not unbearable, but it is a noticeable length - especially with a full complement of players. Still, there's enough here that the vast majority of players will find an engaging and entertaining experience within the box.