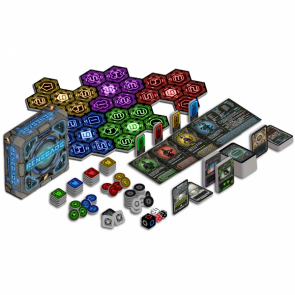 Time to bust out the mirrorshades once more.

The game emerges from a cloud of nomenclature. It's cyberpunk jargon that would make William Gibson grin (or grimace). Once you've sorted out what is meant by a Partition and Server, you've memorized the differences between Propagators and Replicators, and you are aware of why you don't want three Sparks to form up into a Guardian, you'll slip more easily into the shoes of the characters squaring up against the Super-Massive Computers. Tokyo Black, Hettie Magnetic, and their fellow hackers will have to leverage their unique talents to maneuver the SMC's networks, battling countermeasures while uploading and manipulating Contaminants to achieve their goals. This is Renegade, a new title from Victory Point Games designed by Richard Wilkins, better known as Ricky Royal.

I wasn't sure where this game was heading when I cracked open the box and read through the rulebook. It's one of those where you kind of don't really get it until you play it, and it was smart to include a sort of tutorial walkthrough of a sample game in the manual. The secret this game hides is that it is, at heart, a sort of hybrid between a Pandemic-style whack-a-mole, a pick-up-and-deliver, a deckbuilder, and a scenario-based adventure. The result is a game that feels both synthetic and original.

The scenario part is particularly interesting as it sets up the framework of the game, and it is sort of procedurally generated. At the outset, you choose one of four SMCs that establish the initial setup across the Server tiles, each subdivided into six numbered Partitions. It also sets up the difficulty, as they indicate a quantity of Countermeasure cards that represent the system's security at Copper, Silver, and Gold levels. Each of these cards represents a short-term objective that must be completed in 15 card plays- in other words, a full run through of your deck of cards. Each of these has a pass/fail state that impacts the next level with a reward or penalty, but while attempting these goals you have to also ensure that all 25 of the Spark tokens that are placed and moved by the game's automation routines stay off the board or you lose automatically.

The staged scenarios can vary wildly with objectives that can range from pretty easy to pretty much impossible- this is the only really shaky part of the design. In some games, you might find that your copper objective makes the silver one after easier. Or you may have a much harder time achieving the gold because of the game state caused by the preceding stages. Sometimes the objectives line up, sometimes they don't.

Gameplay is chiefly card-driven, with each Renegade's deck featuring four suits corresponding to the five different types of Contaminants they can install (or replicate) into partitions. The suits also key to the available actions. Uploading a Contaminant means playing three cards of the same color. Once you have Contaminant tokens in Partitions, they impact your actions. If you play a blue Information card (the blue suit), you generate movement points but you can move freely through Partitions where you have placed a blue Data Port. Yellow Replicants let you turn SMC Spark tokens into Contaminants, but you have to have more Replicators than Sparks in the Partition. Green Uplinks allow you to push tokens around, and the Red Viruses engage in a little dice-based combat with SMC Countermeasures.

Now, where it gets a little PU&D is how you can transport three tokens of the same color with your character. This is crucial, because with only 15 plays per objective you must work out how to get the right Contaminants to the right places- you won't have time to Upload or Replicate everything you need. When you have three Contaminants of the same color in a Partition, they can be converted to an Installation, a square token that provides even greater advantages. The red Propagator and yellow Replicator for instance makes it easier to crank out Viruses and Replicants. The blue Data Nodes give you a teleport ability.

Gaining onboard advantages against the SMCs is obviously the chief agenda, but tuning your 15 card deck is also a priority. There is a 4 card display, the "Hack Shack" where you can exchange base cards for an assortment of upgraded options, some with optional effects as well as the standard suits. It's a tough decision to buy cards, and later in the game you might find yourself wishing you had made different purchases. This is another point at which the difficulty of the game can get progressively and somewhat inconsistently harder or easier as it moves along, depending on card availability and purchases.

However, with that sort of volatile level of challenge comes some amazing gameplay - especially for the solo gamer. Accomplishing a task given the restrictions in front of you is hugely rewarding, and there is a puzzle-ish element to sorting out the best plays. It's crunchy and satisfying without feeling overly cerebral or deterministic. I find that this game is actually at its best solo, where you can work out the solutions and best pathways on your own time. That said, the co-op gameplay is engaging once players get acclimated to the way this design operates. You can pull off some pretty amazing turns, coordinating plays to achieve goals. But there is something of a learning curve to get to that point, so be prepared to study a little if you plan to play with a group.

I've mentioned the difficulty a few times and how it isn't consistent, even without playing with some of the more difficult variants such as disconnected Partitions scattered across the Servers. I think this is important to note because it can waver from feeling fair and reasonably challenging to reaching Ghost Stories levels of crushing, demoralizing difficulty. Some people are not going to like this. I've gone through entire 15 card rounds, rewound everything, and played through again and then another time and found that I just had no hope due to the cards I had and the state of the board. I don't claim to be one hundred percent sure, but I believe that the game can develop into patently unwinnable situations. However, I actually like how the game handles this although I think this may be its more controversial element. It isn't about winning every stage. You want to go through with the wins and the losses to see how you fare. At the end, there isn't any kind of boss fight or final showdown with and MCP-like SMC- just a tally of your overall score. I get that it kind of feels like a Chinatown finale, but it encourages you to play through and see how well you did instead of giving you a theoretical "You Win!" screen.

I've managed to beat the first two SMCs (admittedly, one is a kind of training simulator) and I have to say that I've enjoyed struggling against the odds, so maybe it's not as much of a problem as it seems. I think this is an awesome game, a brilliant distillation of a couple of ideas brought together with a great and really sort of underused setting (the late-again Netrunner, notwithstanding). I love that it's a small box game, it plays five players or solo without missing a beat, and yeah, I guess that I like that it can be ruthlessly challenging.

Jackwraith replied the topic: #280793 30 Aug 2018 17:51
Hrm. I love the background/setting. I will forever be an early-80s cyberpunk fan, as Neuromancer was the first novel that I remember having a really transformative effect on my outlook. However, this sounds like the kind of puzzle game that just doesn't appeal to me. I was OK with Ghost Stories, but the often-ridiculous level of difficulty was the factor in trading it. But using some of the publisher's later variants to ease that made it a walk. If the first couple SMCs are as easy as you say and the other two are crushing, that sounds like a similar kind of design flaw; in that a lack of playtesting didn't reveal the scenarios wherein your cards and the board state simply don't give you a way out. Based on what you've said, I can already see the expansion coming that provides more Hackers, more SMCs, and several new cards for the Hackers to compete against the game's basic design. I think I'll pass.
Read More...