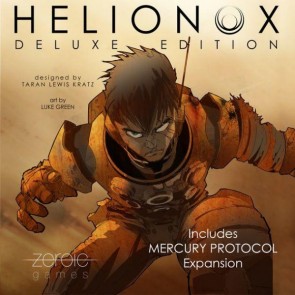 In Space, No One Can Hear You Think.

It's hard to make a deck building game. Or rather, it's hard to make a deck building game that stands out in a seemingly endless sea of competitors, clones, and knock-offs. The ubiquity of the mechanic (in which players start out with a wimpy stack of cards but proceed to expand and modify this personal deck over the course of the game) is such that, for better or worse, each new deck builder needs to do something to justify its existence. What does this game do that the ones I've already got on my shelf don't? Enter Helionox: Deluxe Edition, a contender eager to barge into this overcrowded, occasionally hostile space to prove that it deserves a spot on the table.

It doesn't hurt that overcrowded and hostile are Helionox's bread and butter. The game takes place in a future where the sun is flickering out, which in turn sparks catastrophes all over the solar system. The players take on the role of "architects," powerful individuals vying with each other to unite the panicking masses under their rule. Helionox is part of the evolutionary branch of deck builders I call "deck building and," in which deck building is not the only goal of the game or even necessarily the most important mechanism, but rather the engine that drives the players' actions. Helionox sees the players using cards to move their pawns around the solar system (a series of cards that form a rudimentary board), build embassies, overcome events, shuttle cargo from one planet to another to fulfill requests, and, of course, buy more cards.

Helionox: Deluxe Edition is the product of a successful Kickstarter, and you get a lot of stuff in the box: the base game (which supports both competitive and co-op / solo play), the Mercury Protocol expansion, optional play variants, player mats, piles of tokens, and a metric ton of extra cards. Depending on your perspective, you might see this as an exceptionally generous package or a bunch of over-complicating extras--I think the truth lies somewhere in between. All the different options and game modes mean that you could play this game many, many times before you've seen it all. However, it can also make it feel sprawling and unwieldy, when it might have benefited from being sanded down into a more focused experience.

I have none of these reservations about the game's art and design. Helionox presents a stunningly rendered vision of the future, illustrated in a style that marries the expressive exaggerations of manga with classic sci-fi pulp stylings. The result is a universe that feels idiosyncratic and personal--a breath of fresh air when compared to some of Helionox's cut-and-paste space opera peers. While none of this is detailed enough to create a truly immersive narrative, the cards fire your imagination and please the eye. When a game is 90% staring at cards, that really matters. But does the game carry this adventurous sensibility into its mechanics?

Sometimes, when playing a deck builder, autopilot kicks in. It's easy to fall back on tried-and-true techniques that are (generally) rewarded. Helionox disrupts this sort of gamer muscle memory in a few smart ways. First, and most interestingly, it sets a hard turn limit for the game. Each turn you take the top card from the event pile and put it into play. Once you deplete this deck, the acting player has one last turn and the game is finished. The composition of this deck is such that, no matter how many players are in your game, you will always have exactly nine turns. This tightness means that you can't just buy a bunch of cards and hope you draw into a favorable hand--to do well, you have to make every turn count.

Now, this kind of limit wouldn't work with more traditional deck builders. There's simply not enough time to cycle through your deck in order to get your engine going in a satisfying way. Helionox addresses this problem by giving you a greater degree of control. When you purchase a card, it isn't added to your discard pile, to be shuffled in and drawn later. Rather, you add it directly to the top of your draw deck, guaranteeing that you'll have access to the card next turn. In addition, you have the ability to hold cards from turn to turn. All of this profoundly shifts the focus of the player's decision making. You're not building a long-term engine to reap rewards somewhere down the line, but are instead encouraged to think tactically, trying to maximize this turn and possibly the next. There's a war on earth and mass hysteria on the moon, and if you can play your cards just right you might be able to swing by and drop off some cargo on Mars on your way. If you can work all this into an overarching plan, that's just icing on the cake.

It's an understatement to say that making these tactical decisions is hard. Because the basic currency can be used to either buy cards from the market or perform actions on the board, it's rare to have a turn where the best move is obvious. Add in special location-based powers that can only be used once per turn (a sort of light worker placement element) and the pick-up-and-deliver mechanic from the expansion, and you have a veritable menu of options. This kind of freedom makes each turn feel meaningful, and having a number of viable paths to score points gives the game plenty of depth and replayability. However, if you're the sort of person who freezes up when looking at the dozens of options in the cereal aisle, this abundance of potential actions can feel overwhelming, if not downright daunting.

This kind of thinkiness can be rewarding, but it can make other peoples' turns feel endless. Additionally, the board state changes quickly and in unexpected ways, meaning that planning for your next turn is often a fool's errand. All this adds up to a lot of time spent waiting while your neighbor sweats over their decisions, which will often have little effect on your own. The game does include some mechanics to strengthen player interaction (such as cooperating to overcome events as well as cards with universal effects), but it just doesn't create enough direct competition for me to care deeply about my opponents' actions. This is why I actually enjoyed Helionox the most as a solo experience against the included (very simple) AI opponent. This approach highlights the deep, engaging puzzle at the heart of the game. But I don't know if it's a good thing that removing other players is the key to maximizing fun.

Helionox is an ambitious game about ambitious people. I admire its singular vision and the risks it takes with the deck building formula, even if its embrace of a "more is more" philosophy can sometimes cause the game to get in its own way. It may not have rocketed into my upper echelon of deck builders, but its beautiful art and thoughtful approach have earned it a place on the table.

Josh Look replied the topic: #281174 06 Sep 2018 09:30
I’d been interested in this, but I think it’s ultimately a pass for me. I’ve always liked deckbuilding as a mechanic, but I only really loved any one deckbuilding game until we started seeing games where it wasn’t the only mechanic. Thinkier deckbuilders are interesting, and I liked Core Worlds for some time, but I think it messes too much with the pacing. There’s something about the mechanic that makes me feel like an addict. I can’t wait to buy more cards and see my next hand, and I want it to come back around to me ASAP. To me, that’s where the genre really shines.

I love Tyrants of the Underdark, Clank! and, most of all, Quest for El Dorado for giving some more tactical elements without slowing things down too much.

Josh Look wrote: I love Tyrants of the Underdark, Clank! and, most of all, Quest for El Dorado for giving some more tactical elements without slowing things down too much.

Yeah, Helionox is a much slower, more deliberate game than any of these. The question is, does that extra brain burn lead to more fun? For some the answer will be yes, but I think I'm more of a fan of the three games you've listed.
Read More...